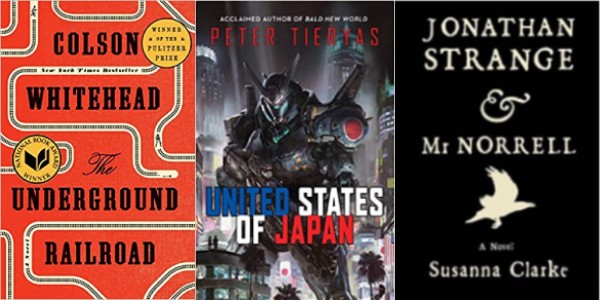 A History of What Comes Next, the thrilling first installment in a new series from Sylvain Neuvel, stars a mother-daughter pair of Kibsu women, highly intelligent beings whose sole goal is “to take [humanity] to the stars before Evil comes and kills them all.” Sara and her daughter Mia entice German aerospace engineer Wernher von Braun to join a secret U.S. government program to recruit Nazi scientists, and carefully disclose intelligence to get the Soviets focused on building rockets of their own. The balance of wry narration, wired action, and delicate worldbuilding make for deeply gratifying reading. Here Sylvain picks ten of his favorite alternate histories.

Alternative history (noun) 1: fiction that is based on history and that explores what might have happened if certain historical events, figures, etc., had been different.

That’s how Merriam-Webster defines the genre, but books are rebellious little things and they’ll test that definition in any way they can. What counts as a historical event? What exactly does “different” mean? Just think of Outlander. There are plenty of historical events in the series, and, as far as I know, there was no time-traveling nurse present at any of them, yet I’m willing to bet many would not describe it as alternate history. It’s not entirely clear that my own book qualifies, either, since all the historical events are real. I just involved fictional characters in them. Perhaps more importantly, books are rarely monolithic. Part of Cixin Liu’s The Three-Body Problem, for example, fits the definition to a T, but the book is so many other things as well that alt-history may not be the first, second, or third thing that comes to mind when talking about it.

Whether they fit Webster’s definition or not, here are ten very different books, old and new, that mess with the past in unique and interesting ways. Some show us a vastly different reality, others are set in a world barely distinguishable from our own. 1. The Man in the High Castle by Philip K. Dick

Set 15 years after a version of WWII won by the Axis alliance, The Man in the High Castle is often the first title to come up when discussing alt-history. Interestingly, it’s also an alternate history within an alternate history. The plot involves a fictional novel depicting a world in which the Allies won the war, a world also different from our own. Try Fatherland, by Robert Harris or SS-GB by Len Deighton for different takes (and styles) on the same premise. Inspired by The Man in the High Castle, Peter Tieryas’s book begins with the same WWII “what if?”, but the setting is a slick cyberpunk version of America and the fictional novel is now a video game. It’s action-packed, a lot faster than its inspiration, and a sensible exploration of themes like patriotism, nationalism, and the burden of an oppressive regime. Did I mention it’s got giant mechs? 3. Bring the Jubilee by Ward Moore

Moore’s book is not inspired by Philip K. Dick’s—it’s the one that inspired it. The novel is set in a world where the Confederacy won the battle of Gettysburg and the Civil War. The story begins in a defeated and impoverished United States in the mid-20th century, where, as luck would have it, time travel is about to be invented. You can check out the Southern Victory series by Harry Turtledove for a similar premise (time travel not included). Speaking of Gettysburg, what if all the dead didn’t stay that way? After the zombie apocalypse puts a stop to the Civil War, Black and Indigenous people are sent to fight the undead. Ireland uses imagined horror to explore a very real one in this provocative YA novel about racism, resilience, and one badass woman fighting for her life. 5. The Underground Railroad by Colson Whitehead

Before the Civil War, the Underground Railroad was a network of secret routes and hiding places used by slaves to reach free states. Colson Whitehead reimagines it as an actual railroad running underground. Cora, a slave on a cotton plantation in Georgia, embarks on a perilous journey in search of her freedom. Traveling through both time and space, each stop in this harrowing road trip sheds light on a different chapter in America’s racial history. In Clarke’s fantasy version of England during the Napoleonic wars, long lost magic is revived to help the British defeat Napoleon’s forces. The worldbuilding here is as phenomenal as it is extensive (this book is HUGE). Neil Gaiman called Jonathan Strange & Mr Norrell “the finest English novel of the fantastic written in the last 70 years,” which might be the finest quote to appear on a book cover in the last 70 years. Walton’s England is more somber than Clarke’s. Set in 1949, this whodunit takes place after England signed a peace treaty with Germany to put an end to the war. When a politician is found dead at the Farthing estate, everyone suspects the main character’s Jewish husband—which may very well be why he was invited. Farthing is a brilliant take on the perils of fascism, and though set in a fictional past, it feels uncomfortably timely. In another slightly altered timeline, a cataclysm forces the Unites States to speed up the space program while an ambitious human computer fights rampant sexism to become an astronaut. A brilliant novel that pays homage to the First Lady Astronaut Trainees (aka Mercury 13) and women pilots everywhere, The Calculating Stars deservedly won both the Nebula and the Hugo. Set in the same era as The Calculating Stars, this novel sees the world’s greatest scientists banding together to save the Earth from impending doom. Oppenheimer, Einstein, Szilard, Fermi, Bohr, von Braun, etc.: Every. Single. Character in this book is a real-life physicist or rocket scientist. It’s astonishingly well-researched. When you’re done, check out Sawyer’s website to find out what’s real and what’s not. More rockets. Both the graphic novel and the novel it’s based on follow the life of a Soviet ace pilot, from his youth at a Stalingrad orphanage to his exile after the Korean War and his hopeless mission to land a Soviet craft on the moon before the Americans. I fell in love with Wesley Robin’s art immediately. The rough lines and bleak color palette match this tragic tale perfectly. If you like this one, try Ministry of Space by Warren Ellis, Chris Weston, and Laura Martin.