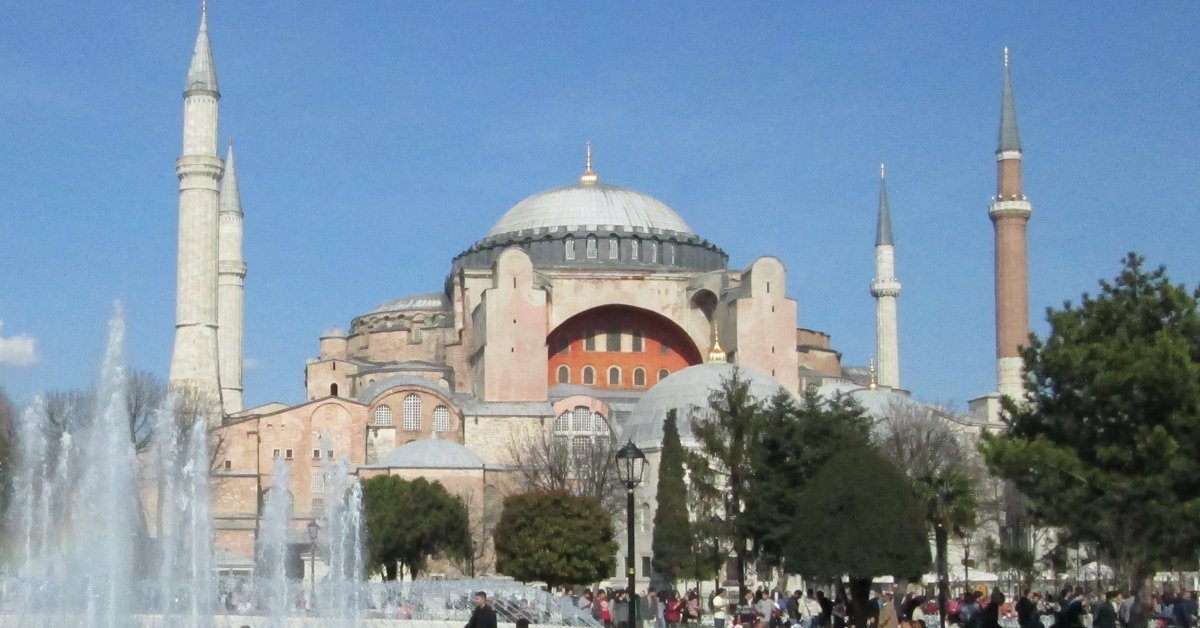 I fell in love with Istanbul in 1996. Compliments of the U.S. Army, I was sent to Wurzburg, Germany, for six months. I made the most of every free weekend I had traveling in Europe.

While in Germany, I took the dreaded mandatory fitness test and happened to get a perfect score on all three events: push-ups, sit-ups, and the 2-mile run. I assure you it would never happen again. This entitled me to four days off. I was off to Istanbul.

Istanbul had been on my radar for a long time. It was an exotic city by Western standards, influenced by the Greeks, Romans, and Ottomans. Its art and architecture reflected its Byzantine and Ottoman heritage. In 1930, Constantinople officially became Istanbul. Sights and sounds like the call to prayer from minarets that punctuated the skyline enticed me to return. I did, this time with my mom, my best friend, and her sister.

They fell in love with Istanbul, too. Here are the reasons why.

The Hagia Sophia (Ayasofya), or the Church of Holy Wisdom, was built more than 1,400 years ago in the Byzantine style. Mosaics of Jesus with the Emperor Constantine IX and Empress Zoe and the Virgin Mary with the Baby Jesus in her lap remain intact and mark the structure’s roots as a Christian church.

The Ottomans converted it to a mosque in the 1400s. What was once a baptistery became a tomb for two sultans, and the Ottomans added the Ablutions Fountain, minarets, and several more mausoleums to the existing floor plan.

Adjacent to the Hagia Sophia, you’ll see the Baths of Roxelana, named for Suleiman the Magnificent’s wife — a treacherous woman who stopped at nothing to advance her interests.

This iconic building is synonymous with Istanbul. Sultan Ahmet built the mosque in the early 1600s. Its six minarets sparked controversy, since they were considered a rival to Mecca. The Blue Mosque (Sultan Ahmet Camii) is named for the blue Iznik tiles that cover its interior. It has always been a mosque, so you won’t see any mosaics of people — only geometric patterns, flowers, and vines. Tulips figure prominently, since they were cultivated first in present-day Turkey and later exported to the Netherlands.

Pro Tip: Both men and women must wear modest clothing inside the mosques; exposed shoulders and knees are forbidden. Women must wear headcoverings. Both Hagia Sophia and the Blue Mosque are wheelchair accessible. For details on accessibility throughout Istanbul, visit John Sage’s website. Allow an hour for each location.

A huge, echoing cistern (Yerebatan Sarayi) was built in the 530s and provided water for the nearby sprawling Great Palace. After Constantinople was conquered by the Ottomans in 1453, the cisterns lay undiscovered beneath the city for 100 years. Now classical music mingles with the sound of dripping water as you tour the cavernous space.

Pro Tip: Visit the website (click on the tab in the upper right-hand corner for English) for information about opening times. The cistern is wheelchair accessible.

Charioteers once raced around the obelisks at the ends of this square. The Egyptian Obelisk once stood in Luxor and dates to 1500 B.C. At the far end, another obelisk, the Column of Constantine Porphyrogenitus, shows signs of wear, since scaling it was a sign of bravery for troops in the sultan’s army.

Near Constantine’s Column, on the corner of Divanyolu Caddesi, you’ll see the Cemberlitas Baths. Built in 1584, this bathhouse, or hamam, continues to operate and is used to foreign visitors. Another popular Turkish bathhouse is the Cagaloglu Hamami, built in 1741. You can find more information on Turkish baths here. Allow 1.5 hours for your visit.

Pro Tip: If you’d like to take home handwoven towels, bathrobes, or bed linens, make a trip to Jennifer’s Hamam, adjacent to the Blue Mosque. On a trip to Turkey, Jennifer Gaudet discovered that the art of handweaving Turkish linens was dying because automated looms produced towels and bedding faster and for less money. She started her shop with just a handful of women who still knew how to weave by hand. Now, about 1,800 rural women weave the items on wooden looms, using traditional techniques. It has become a viable cottage industry in which mothers are teaching their daughters the craft.

Sultan Mehmet II built Topkapi Palace between 1459 and 1464 after he conquered Contantinople. It is actually a series of buildings set around courtyards that provide a comprehensive look at the history and opulence of the Ottoman Empire. The palace museum houses royal garments, gemstone-studded artifacts including weapons and a royal cradle, ancient ceramics, and the harem complex that is literally covered with Iznik tiles.

Pro Tip: The Treasury, Harem, and Hall of Holies are all wheelchair accessible. This link has full details on the palace’s accessibility. Allow several hours for your visit.

A short walk from Topkapi Palace is the Archaeological Museum, which has an extensive display of artifacts spanning 5,000 years. One gallery covers Istanbul’s history while another is home to sarcophagi from a royal necropolis.

Pro Tip: The museum’s main building is wheelchair accessible; however, the steep cobblestone road that connects Topkapi Palace with the archeology museum would not be easy to navigate with mobility issues.

You could easily spend a day meandering through Istanbul’s Grand Bazaar, which was founded when the Ottomans conquered the city. It took me hours to find my way out when I visited in 1996, but I was easily distracted with the carpets, tiles, ceramics, and evil eyes.

I would like to say I had a good handle on where I was the second time I visited the bazaar, but even with a map and signs, it is like walking through a maze — a nice one, not like the one in The Shining.

The shopkeepers are friendly and welcoming. If you choose to look at the Persian carpets or kilims, you’ll be invited into the shop and treated to pomegranate tea with no strings attached. As you sip your tea, the shop owner will give you a short course on how different carpets are woven, what fibers are used, and how long a carpet takes to weave.

A reputable store will include a certificate of authenticity with your carpet that includes the fiber content (cotton, linen, silk, or wool).

Pro Tip: The city tram is a good way to travel through Istanbul’s crowded streets, and it conveniently stops across from Carsikapi Gate, a main bazaar entrance. The tram stop is called Beyazit.

The Spice Bazaar is smaller than the Grand Bazaar, but no less colorful. Also called the Egyptian Bazaar, it was built with money paid as duty on Egyptian imports. Walking through the market, you’ll see heaps of turmeric and curry, dried fruits and nuts, and household goods.

Originally a church outside the city’s walls, the Chora Museum (Kariye Muzesi) is often overlooked on organized tours. However, a cab ride from the Sultanahmet (Hagia Sophia and Blue Mosque) or Seraglio Point (Topkapi Palace) area to the more residential, less touristy part of the city has its rewards.

Within the 11th-century church, you’ll see well-preserved frescoes and mosaics dating to the early 1300s, when it was a Byzantine Greek Orthodox Church. An entire dome is dedicated to the genealogy of Jesus, beginning with Adam. The Virgin Mary is also well represented in the mosaics. Frescoes, more subdued in color but just as stunning, depict the Last Judgment and the winnowing of souls — the saved on the right and the damned on the left.

The Bosphorus River flows between the Black Sea and the Sea of Marmara, an inland sea located entirely within Turkey. The river’s bigger claim to fame is that it separates Europe from Asia. Cruising the river offers stunning views of the mansions, famous landmarks, mosques, and minarets that hug the shore.

Pro Tip: Cruises vary in length from 2.5 hours to most of the day. I found the 2.5-hour cruise to be plenty of time. Some wheelchair-accessible tours are available, so check before booking.

Cooking Alaturka teaches you to cook authentic Turkish meals. Menus are changed up frequently, so if you want to return, you’ll likely learn all new dishes. It’s a divide-and-conquer type of class, with all the cooking divided up among the students. The class finishes with a shared meal and local wine.

Pro Tip: Cooking Alaturka offers 4-hour lunch and dinner classes for English speakers. You’ll go home with recipes. Vegetarians and those with food allergies can be accommodated — just let them know when you book your class.

Near the Hagia Sophia, you’ll find a number of restaurants that offer fresh, delicious food and outdoor seating. The Istanbul Enjoyer Café & Restaurant and the Anatolia Cafe and Restaurant both offer authentic dishes and great service.

Pro Tip: Istanbul’s airport is 30 miles from the Sultanahmet and Seraglio Point neighborhoods where you’ll be spending most of your time. Taxi fare is about $30, and prearranged town cars charge about $35.