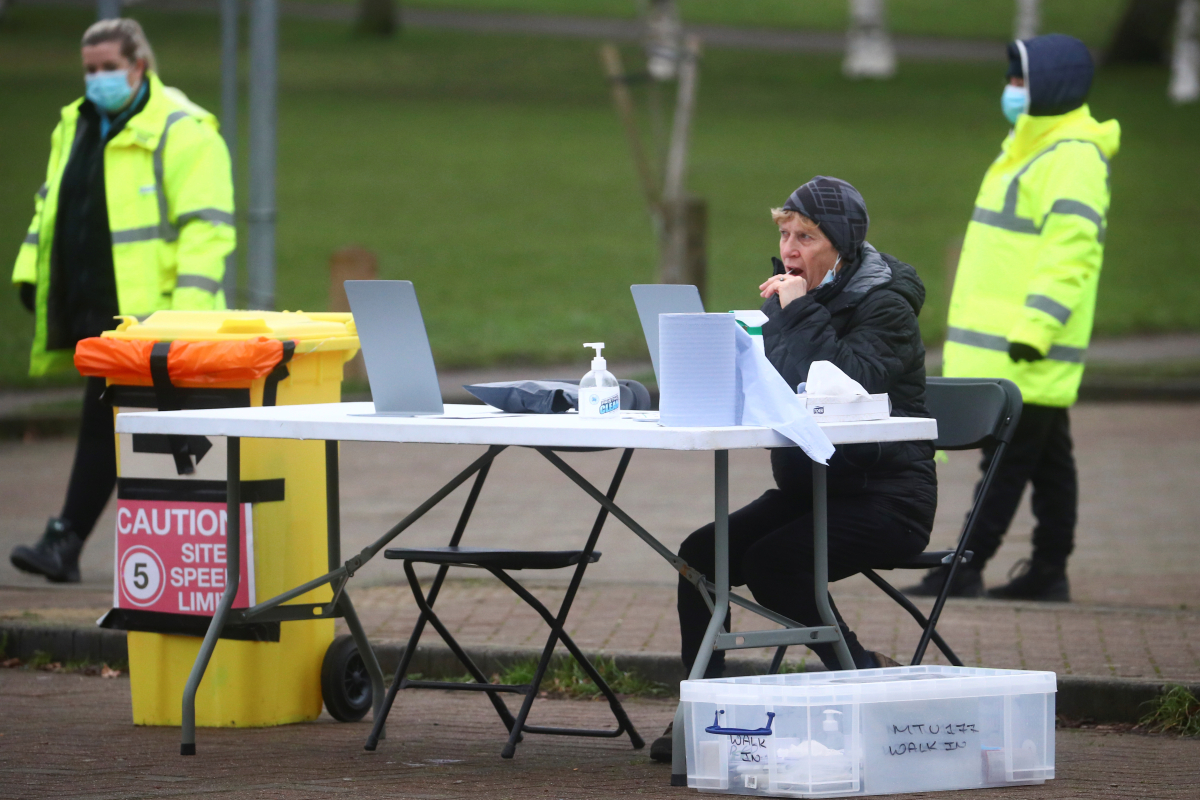 A DOOR-to-door testing blitz on up to 350,000 people has been launched after 11 rogue cases of Covid’s South African mutation were found in the UK.

Officials have been unable to link any of the infected Brits to foreign travel, suggesting they picked it up here.

? Read our coronavirus live blog for the latest news & updates

Residents in eight English postcodes from Surrey to Merseyside are being urged to get swabbed over the next fortnight.

Mobile units have been scrambled, while council officials will knock on doors offering kits to locals.

Authorities are anxious to suppress any spread amid fears vaccination will prove less effective against the variant.

It is more contagious than the original, but there is no evidence it is deadlier.

Speaking last night at the No 10 briefing, Matt Hancock pledged to “come down hard” on the strain.

The Health Secretary said it is “imperative” those in affected areas stay in and stick to the rules.

He warned: “This is a stark reminder the fight against this virus isn’t over yet.”

In total, 105 cases of the South African strain have been found in Britain since late December.

Most have links abroad, but 11 do not.

Scientists warn these could be the tip of the iceberg, with the real total up to 20 times higher. Only up to ten per cent of positive tests are “gene- sequenced” to look for variants.

This is a stark reminder the fight against this virus isn’t over yet.

Paul Hunter, the University of East Anglia’s professor of medicine, said: “The fact we are only doing surveillance on a minority of infections almost certainly means we have more cases in the UK.

“The concern is it is more contagious and also more resistant to vaccine.”

But Mr Hancock insisted the UK was working hard to stop it.

He said: “I strongly urge everyone in these areas to get tested, whether you have symptoms or not.

“A mutation in one part of the world is a threat to people everywhere. We need to come down on it hard, and we will.

“We’ve already made sure that all these cases are isolating, and that we’ve done enhanced contact tracing.

Q: WHAT IS THE NEW VARIANT?

A: The B.1.351 South African variant is a new strain of the coronavirus with eight mutations. It was first detected in Nelson Mandela Bay, South Africa, in October 2020. It now makes up more than 90 per cent of Covid cases in South Africa and has spread to 20 more countries, including the UK.

Q: WHY IS IT SO CONTAGIOUS?

A: It spreads about 60-70 per cent faster than the original strain. This is because it can bind to human cells quickly and infect them more easily due to its mutations.

Q: WHY ARE WE MORE WORRIED ABOUT IT?

A: The speed of its spread means that if we don’t contain an outbreak quickly there would likely be a spike in cases and the NHS might become overwhelmed again. It is also thought that Covid-19 vaccines may be less effective against it.

Q: IS IT MORE DEADLY THAN THE ORIGINAL STRAIN?

A: It is not currently thought to be more deadly. Although it spreads faster, there is not enough data to suggest it causes more deaths or hospitalisations.

A: We have banned travellers from coming into England from South Africa. If they are still able to enter the country, as British and Irish nationals are, they must self-isolate for ten days. The vaccine roll-out will also provide ­immunity against the strain, although ­potentially at a lower level.

Q: WHAT DO I DO IF I LIVE IN A POSTCODE AREA WHERE THERE ARE CASES OF THIS VARIANT FOUND?

A: You must take up any offer of tests given to you ­— either from a door knock or a mobile test centre. If you have any symptoms or test positive you must isolate. Otherwise, continue washing hands, covering your face and giving space.

“We’re surging extra testing into the areas where this variant has been found and sequencing every single positive case. Working with local authorities, we’re going door to door to test people.”

Transmission has been found at eight postcodes — in London, Surrey, Kent, Hertfordshire, the West Midlands and Merseyside.

All 350,000 locals will be offered a test over the next fortnight.

Travellers from South Africa have already been barred from entering England since December 23.

Dr Susan Hopkins, from Public Health England, told the No 10 press conference: “These cases are in quite separate parts of the country and they are more likely to be related to somebody who potentially had asymptomatic infection when they came in from abroad.

“We are looking to find extra cases in the community to see where we can find links and to try and close down and eliminate the transmission between people.”

It could spell bad news for Brits planning to go abroad this summer, as stopping variants was the key reason travel restrictions came in.

A Government source said: “We have to wait and see how effective vaccination is against transmission. If it works at stopping spread, we can open up sooner.”

These are the postcodes that will be given additional testing:

The PM said yesterday: “I think everybody understands the need for tough border controls whilst there is a risk of new variants.”

But he played down fears jabs will be ineffective against them.

On a visit to the Al Hikmah vaccination centre in Batley, West Yorks, Mr Johnson said: “We are confident all the vaccines we are using provide a high degree of immunity and protection against all variants.”

He said they could be adapted if necessary — but experts remain fearful. South Africa’s is a concern after a study showed its resistance to past infection immunity.

Chief scientific adviser Sir Patrick Vallance warned it could be “a virus that can escape some of the immune effects of antibodies”.

Novavax’s jab was also 60 per cent effective in South African trials, compared with 89 per cent here.

Janssen’s was 72 per cent effective in US-based studies, falling to 57 per cent in South Africa.

Pfizer’s trials predate the mutation, but its scientists have since revealed they think it will be effective, as do Moderna’s.

What Covid strains are in the UK?

South Africa variant postcode areas revealed – is your area on the list?

Do Covid vaccines protect against the South African variant?

Dr Simon Clarke, Professor in Cellular Microbiology at Reading University, said: “This variant appears to spread rapidly and evidence is emerging to suggest it is less susceptible to immunity induced by current vaccines.

“The discovery of a handful of cases with no links to travel to Africa indicates it might be more widespread than previously thought.

“This spread, even if small in scale, needs to be brought under control quickly.”

NOTHING must undermine the extraordinary success of our vaccine rollout.

That means combating anti-vax idiots, among them the President of France, spreading lies about AstraZeneca’s jab.

But it must surely mean closing our borders, temporarily but immediately, not just to countries deemed higher risk but to all (with a small number of exemptions for certain jobs).

We are told our jabs should work against the worrying South African Covid variant. But Health Secretary Matt Hancock’s insistence that those in certain postcodes get tested, even without symptoms, betrays his nervousness.

Other new strains must be kept out, especially with so many still unjabbed.

Every day, that number falls at a fantastic rate. Almost a million people were inoculated at the weekend alone.

That, like Britain’s commitment to donate excess vaccines to nations in need, is a cause for huge pride.

We must do nothing to set it back.