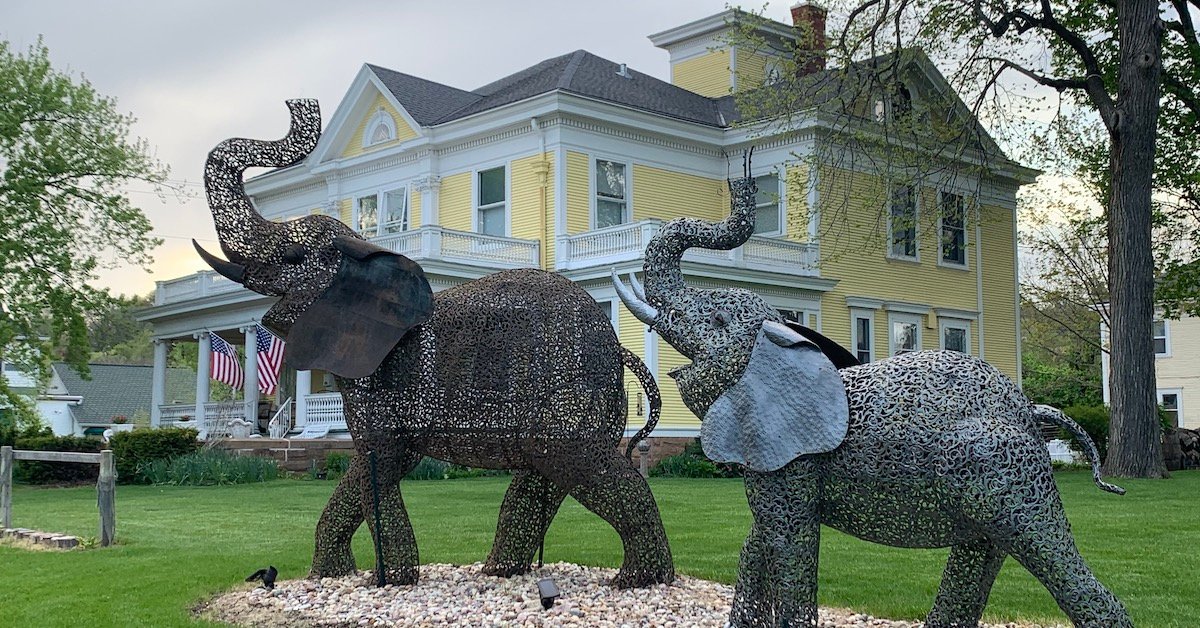 As kids, how many of us said we were going to run away to the circus? Well, perhaps a trip to Baraboo, Wisconsin, with its circus history is the next best thing! This lovely Wisconsin town is located on Highway 12 North of Madison and is near the Wisconsin Dells. Visitors can stay at a mansion where one of the Ringling Brothers lived and tour another brother’s mansion. You can visit the Circus World Museum or walk by the Al Ringling Theater. All over Baraboo, there are historical markers and remnants of Circus life in the Birthplace of The Greatest Show on Earth.

Baraboo was the winter headquarters for the Ringling Brothers until 1918. After they moved their winter headquarters to Sarasota, Florida, the Circus World Museum opened in their former home, so the circus history remains. If you plan to visit the Circus Museum, summer is the best time because they open in June. However, those that just want to walk past, and enjoy the historic markers will enjoy visiting in the spring and fall when the weather is favorable.

A bit of backstory: The father of the Ringling Brothers was August Ringling, a German immigrant and harness maker. August married French immigrant Marie Salomé Juliarco and together the two had seven sons and one daughter. Five of the seven Ringling sons started the Ringling Brothers Circus. In 1884, Alf, Al, Charles, John, and Otto Ringling started out, however, Henry joined the show in 1886, and in1889, the seventh Ringling brother, A.G. “Gus,” joined the show.

A Baraboo historic marker shares a bit of the story: “The Greatest Show on Earth was born and grew to maturity in Baraboo.” It continues, “When the five Ringling brothers gave the first performance of their Great Double Shows, Circus and Caravan, May 19, 1884, the main tent was 45 by 90 feet. There was no bandwagon, no menagerie. The menagerie was started in 1886, with a hyena advertised as the Hideous Hyena Striata Gigantium, the Mammoth, Midnight Marauding, Man-Eating Monstrosity.”

The marker goes on to explain, “After traveling in horse-drawn wagons for six seasons, the circus became the Ringling Bros. United Monster Railroad Shows. Moving to rail travel changed everything for the Ringlings, making the circus that much more accessible and bringing them great wealth. The marker ends, “Until 1918 the circus wintered in Baraboo, where many of the winter-quarters still stand. From humble beginnings, a little hallroom show became the mightiest and most spectacular organization in the entertainment world.”

The Ringling House Bed & Breakfast is a great place to stay with circus history. Located on 8th street in Baraboo, it is a lovely Canary yellow. Innkeepers Julie Hearley and Stuart Koehler offer six guest rooms. My husband Keith and I stayed in the Ella and Fred room! The house was built in 1901 by Charles Ringling, the fifth of the Ringling sons. He oversaw the production aspects of the circus. This is the house where he and his wife Edith lived until they moved to Sarasota. The house remained in the Ringling family for over 100 years.

Included in the stay at the Ringling House is a wonderful breakfast! Tours are also available with a stay. Note that this house does not have an elevator, so it is not handicap accessible.

Al Ringling was the oldest of the Ringling Brothers and the one who started the Ringling Brothers circus. According to the Sauk County Historical Society, the Al Ringling red stone mansion that he built is the largest house built in Sauk County, and it was constructed for the sum of $100,000. Al and his wife Lou lived there during their lives, and later, Al’s sister Ida Ringling lived in the home. The home is beautiful and open for tours. It is a wonderful mixture of circus history and historic home! Today, Joe Colossa is the proprietor of the Al Ringling Mansion.

Pro Tip: They Recently opened the Al Ringling Brew Co. in September of 2020 using a family recipe. This is a stop I’d like to make on a return trip!

The Al Ringling Theater is located on the square and is lovely to view even from the outside! Check to see when they will start offering tours again. Al Ringling built the theater in 1915 in the style of the French opera houses.

4. Historic Landmark On The Square & More

Downtown, stop at the Historic Landmark and read a little about the history of the Ringling Brothers and the 100-year anniversary celebrated on May 19, 1984. Also note the concrete wall surrounding the courthouse is decorated with circus animals and names of some of the circus businesses including Moeller Wagon Works. The square also sports the International Clown Hall of Fame.

Pro Tip: When looking for a place to dine, check out the Baraboo Burger Company. They offer a burger of the month and to-die-for cheese curds. Located on the square, this fun place provides comfort food in a casual atmosphere.

The Circus World Museum is a modern-day treasure. Whether you decide to walk through the exhibits on the first of June or wait until mid-June to attend during the live performance phase of the season, you will be glad that you visited. It is a great place to be a kid again!

The Circus World Museum was incorporated in 1954 by John Kelly, the Ringling Brothers’ attorney. He worked with the Gollmar Family circus, cousins to the Ringling family. Together they opened a historical and educational facility on the original winter grounds, where many of the structures are on the National Historic Register! A walk through the circus wagons, costumes, and posters alone is worth the visit.

Outside is a great visit as well, with signs on the buildings and a view of the Baraboo River. Circus history is unveiled with animal barns, railroad cars, and historic signs and posters.

6. Murals And Art In Baraboo

Take time to drive through town. You will find historic landmarks and murals that depict Baraboo’s circus history. Take time to talk to people to hear some of the stories and learn what it was like to grow up in a circus town. While staying at the Al Ringling Bed and Breakfast, one morning, we spoke with a couple. He had grown up in Baraboo and was one of the last graduating classes to have their ceremony in the Al Ringling Theater. He recalls seeing elephants. and animals walk through the streets as they came and went from the trains. He said it was a fun town to grow up in!

Pro Tip: While not a circus stop, think about including the International Crane Foundation as part of your Baraboo experience. The International Crane Foundation (ICF) is located on a 120-acre prairie and boasts 275 species of native flowers. The foundation is home to 15 different types of cranes from all over the world, including one of the most endangered, the whooping crane from the Southeast U.S., which you can learn more about here.

This is a great place to bicycle or walk. The Riverwalk connects multiple city parks together to include the Maxwell-Potter Conservancy, Kiwanis Park, Statz Park, Mary Rountree Evans Park, Lower Ochsner Park, Attridge Park, and Ochsner Park and Zoo.

These are the main stops for circus fun in Baraboo, Wisconsin. If you want to learn even more about circus history, plan a trip to Sarasota to see The Ringling. John Ringling built a beautiful home there along with his wife Mable. There is a circus museum and an art museum, and you can tour the amazing house there as well! There are also the gardens and the Wisconsin Railroad Car, the private car used by John and his wife to travel the country for business and pleasure.

You can’t run away to the circus, but you can run to circus history and immerse yourself in it for a few days in Baraboo!