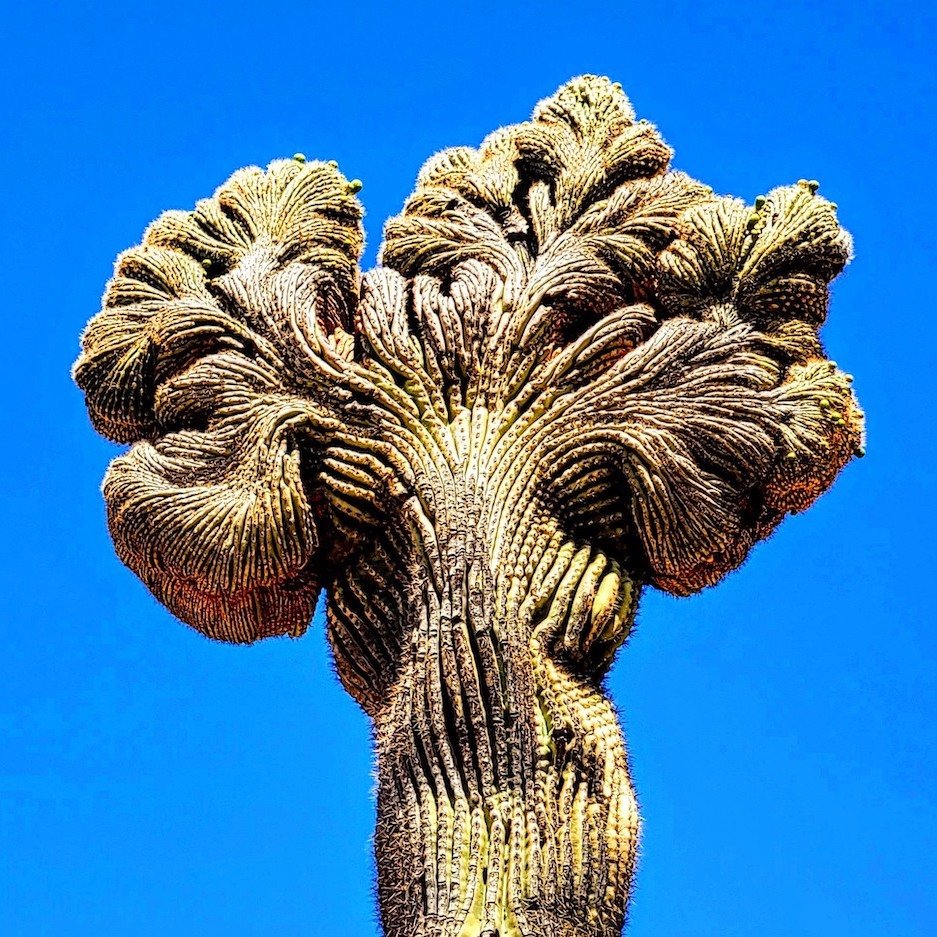 Arizona’s crested saguaros are quite a sight with their whimsical forms. I was so intrigued that, over recent years, I pursued a private quest to see them. In this article, I share with you my list of crested saguaro places that are quite accessible. I am not really a hiker, so I have chosen to see crested saguaros where you don’t have to walk a long way. They are in suburban towns, botanical gardens, and park visitor centers. If you are in either Phoenix or Tucson, take some time to see these fine examples of the crested saguaro — an anomaly of artistry in nature.

What Is A Crested Saguaro?

The truly iconic symbol of the Sonoran Desert is the slow-growing saguaro cactus. The Sonoran Desert covers around 100,000 square miles and is mostly in Arizona, part of the northern state of Sonora in Mexico, and some sections of the northern Baja peninsula. The oldest known saguaro lived up to 300 years and the tallest known saguaro grew to be 78 feet. Normal saguaros rarely grow in symmetry and can sometimes have as many as 50 arms.

Once in a while, a saguaro can produce a fan-like form, and then it is called a crested or cristate saguaro (PDF). “Crests” generally measure between three and five feet in diameter with convoluted patterns and folds. Biologists disagree as to why saguaros do this. Some speculate that it is a genetic flaw or a hormone imbalance. Others say it is the result of triggers like a lightning strike or freeze damage. The crests occur when the cells in a regular saguaro stem divide outward rather than continuing in their normal circular pattern.

Crested saguaros do not last long because of their shallower and more delicate root systems. In fact, a crested saguaro can be killed by excessive foot traffic at and around its base. So when you inspect one up close, please stay at least 10 feet away. Being more top-heavy, they are also vulnerable to strong winds. These factors also contribute to their rarity. That is why most of the surviving crested saguaros are tucked away in the interior of nature preserves. Over 2,200 have been documented by the Crested Saguaro Society.

Where To See Crested Saguaro Around Phoenix

Just 15 minutes from downtown Phoenix is the Desert Botanical Garden, one of the landmarks of the desert valley. This unique garden gives you a great overview of the treasures of desert plant life. And it has one crested saguaro (it used to have three). The remaining crested saguaro is quite tall; however, it’s not that easy to see the crest’s delicate intricacies up close. It is almost at the end of the trail of one of the garden’s five sections. Plan your visit and trek to see it accordingly.

Carefree, Arizona, is about 40 minutes from downtown Phoenix. It takes pride in its Carefree Desert Gardens, which is at the center of the small suburban town. It features the famous Carefree Sundial, which, at 90 feet, was once the largest sundial in the U.S. And, tucked in the southeastern corner of the garden plaza, near the children’s playground, is a group of plants that includes one young and tall crested saguaro.

Carefree has a twin town called Cave Creek, Arizona, whose landmark is the Cave Creek Regional Park and Frontier Town, an Old West shopping and entertainment area. It has a crested saguaro just off the road. From Carefree Desert Gardens, drive southeast on Cave Creek Road for about 14 miles, turn right in North Bartlett Dam Road, turn left after six miles on North Horseshoe Dam Road, and drive for a little over 3 miles. The road is paved except after Mile 3. Stop, look to your left, and you will see a very mature but beautiful single shield crested saguaro about 50 yards up the small hill.

My favorite crested saguaro stands at the entrance of the Arizonian RV Resort, just a few miles from the entrance of the Boyce-Thompson Arboretum, the largest botanical park in Arizona. This is in the town of Gold Canyon, only 20 minutes from major shopping malls and 45 minutes east of downtown Phoenix. It is a short and chunky saguaro, so you can easily marvel at the intricacies of its crest.

Where To See Crested Saguaro Around Tucson

Just 15 minutes northeast of downtown Tucson is the Sabino Canyon Recreation Area of the Coronado National Forest. Before reaching the visitor center and just after the separate building of rest areas, turn right on the walk that leads to the Bajada Loop Nature Trail. At the end of the short walk, turn left to go to the trail. About a quarter of a mile along the trail, you will find a magnificent new-growth crested saguaro. It stands right next to a same-size regular saguaro (without a crest) so you can compare the abnormal crested growth pattern to the regular saguaro growth pattern. There are a few others in the recreation area if you would like to view more.

About 30 minutes from downtown Tucson is the Arizona-Sonora Desert Museum. Right off the parking lot before you even enter through the outdoor museum gates stands a young crested saguaro with a crest that’s just three feet in diameter. It is the shortest on my list so far, and thus its whimsical form is almost eye-level — even for me. I had a ball taking pictures of this one.

About a mile or two beyond the museum is the entrance to the Tucson Mountain District of the Saguaro National Park. There are over two million saguaros in both districts of the park. It is estimated that there is one crested saguaro for every 10,000 regular ones. Thus, this park has the largest treasure trove of crested saguaros. At least 27 have been documented in the east (Rincon Mountain District) side and 30 in the west side. Most of them are accessible through hikes on trails but a couple can be viewed from the loop road around the park. If you love to hike, this is the best place to see them.

While saguaro crests do tend to be larger and more elaborate, other species of cacti are more than capable of developing similar mutations. At Carefree Desert Gardens, for example, we found a low organ pipe cactus that is crested just beside the crested saguaro. Such crests have even been noted in a variety of succulent plants, from agave to cholla to prickly pear.

Due to their appearance and scarcity, crested cacti are coveted by many ornamental plant collectors. This has led to the poaching of such plants. This practice still poses a threat to the known existing population today. But increased public awareness of their illegal removal has led to a drop in this problem. Still, remember that crested saguaros are fragile. In fact, many of those written about (in the Desert Botanical Garden, Tucson Botanical Garden, University of Arizona campus, and the Boyce-Thompson Arboretum) have already perished. If you want to see them, please do so as soon as you can.