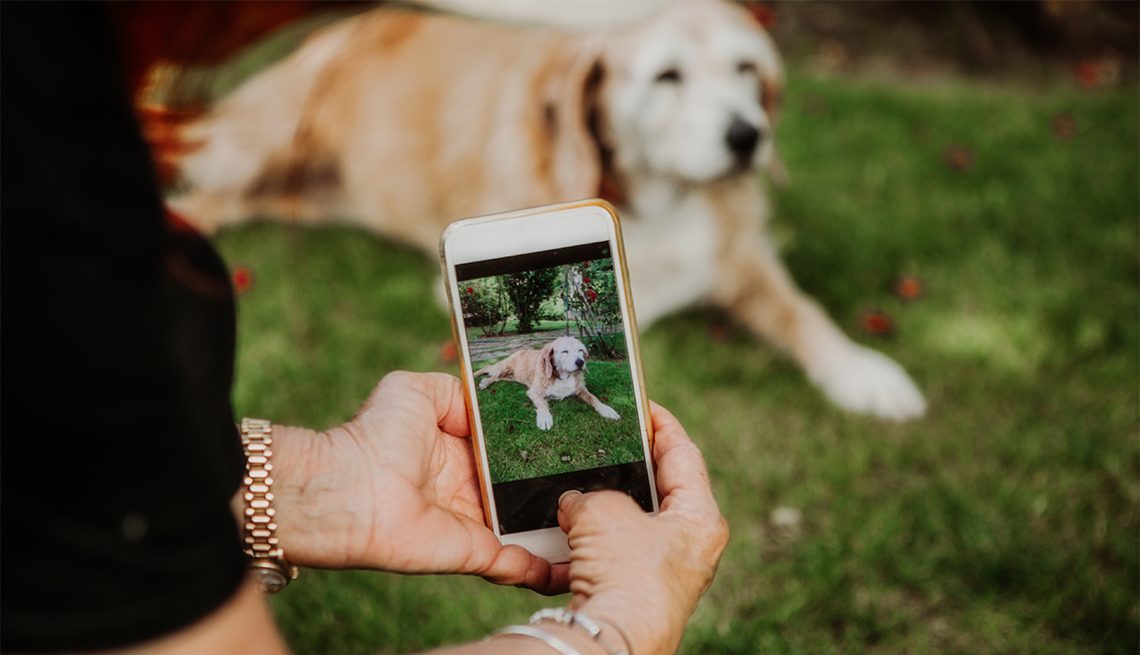 Natural light and a little delay from the phone camera’s timer make details of every hair on Jinx’s body stand out.

4. Use this timer trick

If you’re not trying to capture something that will move quickly, try a time delay.

“Your smartphone’s timer can be your best friend,” Graham says. A 3- or 10-second countdown, which are the usual options, is ideal for a couple of reasons:

Graham’s top tip for shooting video: Hold the camera as steady as possible. Many phones have optical image stabilization, which could help steady your shot. But you also can do your part to reduce the odds of a blur.

Put both hands on the phone or use your surroundings, for example, by carefully resting the phone on a railing outside or propping it against some books when conducting a video interview inside with a loved one.

“If you can, also pick up an inexpensive selfie stick or tripod,” he says. “It can be a great tool in your arsenal and go a long way to steadying your shots. As much as you try, it’s difficult to stop your hands from shaking after a few seconds of holding the phone.”

Instead of placing your subjects in the center of the frame all the time, move them to the left or right to make your photos instantly more powerful. Better yet, go in at an angle to add some extra energy to the shot.

To get people to smile naturally, Graham suggests asking them to laugh out loud and do it with them.

“A natural smile will emerge,” he says. “And you’ll have fun, too.”

Don’t always take photos of people posing for the camera. Their expressions can look forced and unnatural. Candid shots are great, but be sure to get your subject’s permission before uploading the photo or video to social media.

One last tip, an easy one: Take a ton of photos and videos — because you can.

Unlike film cameras and early digital cameras with limited memory cards, today’s smartphones have a ton of storage. The more photos you take, the better chance you have of finding a winner. That’s just in case you realize that someone is blinking or little Billy is giving his grandma rabbit ears.

Don’t delete the duds immediately either. You might see that you’ve taken a great shot after all when you look at it on a larger screen. You’ll waste your phone’s precious battery power by deleting when the device is away from its charger. And you might miss an amazing moment while you have your head down.

You can delete later. Concentrate on taking great pictures now.