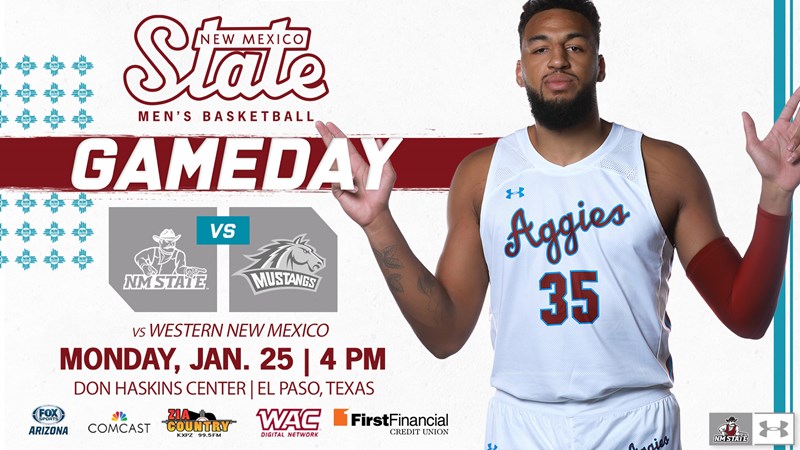 • Finally able to practice in their home state, the NM State men’s basketball team is taking part in its first game in nearly one month as the Aggies head to the Don Haskins Center in El Paso, Texas, to tangle with NCAA Division II foe Western New Mexico. Tip-off time has been set for 4:00 p.m. MT Monday (Jan. 25) afternoon.

• Adam Young and Rus Bradburd will have the call of the game on FOX Sports Arizona, Comcast New Mexico, The CW in El Paso and Las Cruces as well as the WAC Digital Network.

• Listeners outside of the Las Cruces area can access Nixon’s call on the Aggie Sports Network’s affiliate stations which include 103.5 FM KNMZ (Alamogordo), 1150 AM KNMM (Albuquerque), 1240 AM KAMQ (Carlsbad), 1380 AM KHEY (El Paso), 1230 AM, 94.9 FM KYVA (Gallup) and 107.1 FM KMDS (Las Vegas). Fans not in any of those areas can also find his broadcast via the TuneIn app which is available nationwide.

• Monday afternoon the Aggies will find themselves in a position they haven’t been in for over a year as they will try to bounce back from a loss. Fortunately, consecutive setbacks have been something of a rarity in the Chris Jans coaching era in Las Cruces.

• The Aggies are 15-2 (.882) in games coming directly after a loss under Jans’ watch and as a DI head coach, Jans owns an overall record of 24-4 (.857) in games directly following losses. Through his four-plus years as a DI bench boss, his teams have never had a losing streak longer than two games.

• NM State will be taking part in its first game since Dec. 28, 2020. The 28 days between regular season games represents the longest break between consecutive in-season showdowns in program history. Over 100 years ago in the 1912-13 season, NM State had a 27-day break between regular season games. The Aggies dropped a 45-9 decision at the El Paso YMCA squad on Dec. 21 and didn’t return to the court until Jan. 18, when they played at El Paso High School and scored 35-34 victory.

• The COVID cancellation circus has not spared the Aggies so far this season. As of this date, NM State has seen six of its non-conference contests canceled due to positive COVID-19 tests within its program or its opponents’ programs. Those games included at Santa Clara (Saturday, Dec. 5), at Cal Pol (Monday, Dec. 7), at Arizona (Saturday, Dec. 12), against Santa Clara (Thursday, Dec. 31) and two at UC Riverside (Friday, Jan. 2, and Saturday, Jan. 3).

• As a result of the numerous cancellations, NM State has played just three games thus far in 2020-21. That makes the Aggies tied with American and Loyola (Md.) for the NCAA Division I men’s basketball squads who have played the fewest games of the year thus far.

• Monday afternoon’s showdown with Western New Mexico marks the Aggies’ first neutral site game in the city of El Paso, Texas, since 1961. On Dec. 29 of that year, NM State scored a 67-54 victory over Baylor in the Sun Bowl Tournament.

THE RETURN OF THE AGGIES – KIND OF

• After spending 65 days hunkered down at the Arizona Grand Resort & Spa in Phoenix, Ariz., NM State received a colossal piece of good news courtesy of the lawmakers in its home state.

• In the late afternoon hours of Tuesday, Jan. 19, New Mexico governor Michelle Lujan Grisham loosened the state’s COVID restrictions when it came to intercollegiate athletics. That day, it was announced all college teams could hold full practices instead of the five-person sessions they had been held to since the COVID-19 pandemic began back in the spring of 2020.

• As a result, the decision was made on the night of Jan. 19 to return the Aggies to Las Cruces, N.M., so they could practice on their home court for the first time since November of 2020.

• Wednesday, Jan. 20, NM State packed up a bus and commenced the six-hour drive back to Las Cruces, N.M.

• Finally, on Saturday, Jan. 23, NM State got off of its latest COVID-19 pause and held a full practice in the Pan Am Center that afternoon.

• Though they’re able to practice back in New Mexico, playing games there is still out of the question. The state’s COVID-19 guidelines do not allow any intercollegiate teams to play games within the state, but NM State is currently exploring options to play its remaining “home” games in the state of Texas.

• The Mustangs come to El Paso from the state of Idaho where they played three games in the span of three days last Thursday, Friday and Saturday against Northwest Nazarene University.

• As it stands, NM State is the lone team in the WAC who hasn’t taken part in a league tilt in 2021. That will chance this coming weekend when the Aggies make a return trip to Phoenix, Ariz., to tangle with league foe Grand Canyon at the GCU Arena. The two-game series between the Aggies and Lopes will begin Friday night with a 7:00 p.m. tip-off and conclude with a 7:00 p.m. tilt Saturday night.