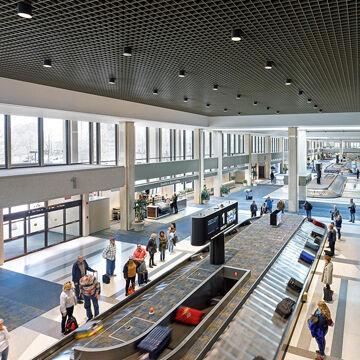 Over 1 million passengers have traveled daily since mid-March, according to Transportation Security Administration checkpoint numbers. Mother’s Day weekend saw the largest number of travelers since early March 2020. The total of passengers nationwide so far this year moving through TSA checkpoints is just over 40% of all traffic last year.

Virginia air travel is already picking up, according to several airports throughout the state. Robert Yingling, spokesman for the Metropolitan Washington Airports Authority, said numbers are low compared to 2019 but travel is increasing. He speaks on behalf of both the Washington Dulles International and Ronald Reagan National airports.

“Travel volumes at Reagan National and Dulles are still well below where they were at this time in 2019,” Yingling said. “We have seen gradual recovery since the pandemic.”

Troy Bell, the director of marketing and air service development at Richmond International Airport, said that air travel has increased as more people get COVID-19 vaccines and with the warming weather.

“March comes around and then all of a sudden we see about a 60% increase,” Bell said. “We’ve seen a true increase and we think this one’s going to stick.”

Air travel has increased daily at the Norfolk International Airport since January, according to Charles Braden, the director of market development.

“We had a big surge around the holidays; Christmas and New Year’s holiday,” Braden said.

“It’s not expected really to recover for several years to the levels that it were previously,” Braden said.

People are still traveling within the United States, however, to destinations where they can get outside and socially distance, Braden said.

“Even in the fall, a lot of the activity was to destinations that you could call open, and by that I mean places like beaches or mountains or deserts,” Braden said.

“People are traveling to places like Florida,” Bell said. “They’re also traveling to some of the mountain destinations where the perception is lots of space, lots of fresh air, lots of elbow room and few restrictions.”

Some of the most popular U.S. travel destinations are Orlando, Florida; Los Angeles; Denver; and Atlanta, according to Yingling.

There are going to be a number of changes in air travel trends according to Rick Hamilton, a senior distinguished engineer for Optum and a frequent business flier.

“I think that leisure travel is probably going to pick up faster than business travel because everybody has this pent up desire for a vacation or to go see distant loved ones,” Hamilton said.

Hamilton said that for the airline industry to recover, business travel needs to pick back up again, but it may resume more slowly than personal travel.

Even though businesses may have found an alternate method to traveling through the use of online tools, the prospect of better deals through face-to-face interaction could spark business travel once again, Bell explained.

Bell said once more companies start sending more representatives out to the field others will follow.

“As soon as that happens, you’re going to find that other folks make the adjustment to get out there, too,” Bell said.

After 15 months, Hamilton is ready to fly again and recently bought his first air tickets for leisure travel. He advises travelers to follow guidelines and get vaccinated.

“I’m not extremely excited about sitting next to a stranger, you know, next to me on a plane,” Hamilton said. “But I believe that once you’re vaccinated and follow all the normal CDC protocols, that it’s an acceptable risk to get life back to normal, or something resembling normal.”

The Centers for Disease Control and Prevention announced Thursday that vaccinated individuals don’t have to wear masks or social distance unless a law or regulation requires it. Passengers must still wear masks in airports and on planes, however.

Capital News Service is a program of Virginia Commonwealth University’s Robertson School of Media and Culture. Students in the program provide state government coverage for a variety of media outlets in Virginia.