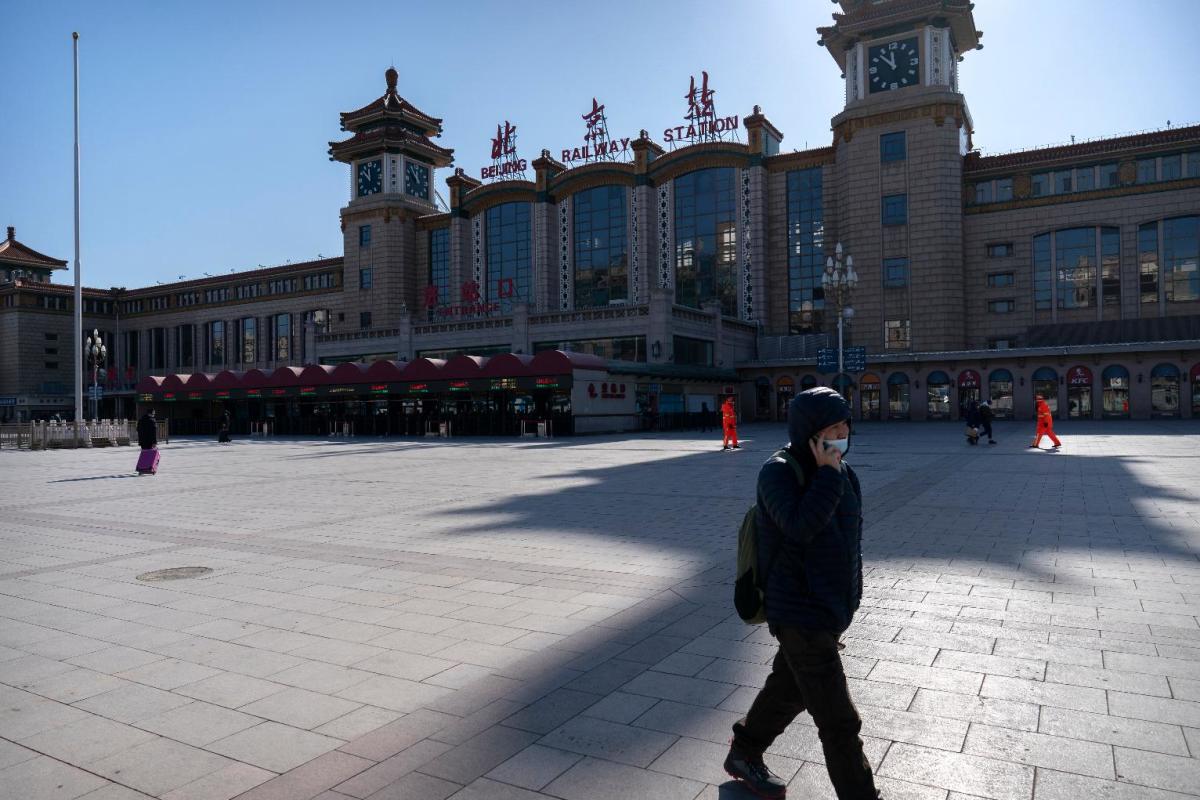 BEIJING (AP) — Efforts to dissuade Chinese from traveling for Lunar New Year appeared to be working as Beijing’s main train station was largely quiet and estimates of passenger totals were smaller than in past years.

Thursday started the roughly two-week travel rush ahead of the holiday that falls this year on Feb. 12, a time when trains and other transportation are usually packed with migrant workers taking what may be their only chance each year to travel home and see family.

At the Beijing station, only about five of 15 security gates were open and the usual lines at ticket windows and passengers camped on the central plaza were nowhere to be seen. China has in recent years upgraded systems along with building the world’s largest high-speed rail network, but passenger numbers have remained heavy.

Failure to restrict travel before the Lunar New Year travel period last year was blamed for the spread of the coronavirus, especially since the central city of Wuhan, where the first clusters of the illness were detected, is a key travel hub that was used by millions of passengers.

This year, authorities have offered free refunds on plane tickets and extra pay for workers who stay put to dissuade travel for the holiday.

Travelers must have a negative virus test within seven days of departure, and many local governments are ordering quarantines and other strict measures on travelers. A national health official had this message last week for Chinese citizens: “Do not travel or have gatherings unless it’s necessary.”

At a gated community in Beijing’s northeastern suburbs, domestic worker Tang Ying said returning to her hometown in the central province Henan was just too risky. “You could get sick or you could get quarantined or caught by other rules,” said Tang. “Most of the maids I know feel the same way.”

Officials are predicting Chinese will make 1.7 billion trips during the travel rush. That is down 40% from 2019. From some destinations, the numbers could be much higher, with departures out of Beijing and the southwestern metropolis of Chengdu down by more than 75% over the period, according to estimates from travel associations.

International arrivals are similarly affected, with virtually all foreigners barred from entering China.

The National Health Commission said Thursday that 41 new cases of domestic transmission had been reported over the previous 24 hours, down from 55 on Wednesday 69 the day before.

A total of 1,820 people were in treatment for COVID-19 and another 988 being observed in observation after testing positive but displaying no symptoms of the virus. China has reported 4,636 deaths from COVID-19 among 89,326 total cases.

— Vietnam has reported 82 new COVID-19 cases in two clusters, hours after counting its first new local cases in nearly two months. The Health Ministry said 72 are workers at an electronic company in Hai Duong province. One employee’s infection was confirmed earlier Thursday after her colleague was found to have the virus upon arrival in Japan several days earlier. The company was closed for disinfection, surrounding communities were locked down and over 3,000 people will be tested. In neighboring Quang Ninh province, 10 people tested positive a few hours after a worker at Van Don international airport was confirmed to be infected. No connection between the clusters has been reported. Vietnam now has counted more than 1,600 cases of COVID-19 with 35 deaths.

— Travelers returning to New Zealand will face stricter rules at quarantine hotels as health authorities investigate how up to three people were infected while they were staying at Auckland’s Pullman Hotel. The people were released before testing positive and were potentially contagious, but testing has shown no evidence the virus has spread in the community. New Zealand has managed to stamp out community transmission of the virus. COVID-19 Response Minister Chris Hipkins said Thursday that as an interim measure, travelers would need to stay in their hotel rooms for the final days of their 14-day mandatory quarantine, and would also face stricter controls around leaving their rooms at other times. Health authorities believe the three people caught the virus from another returning traveler at the hotel. Meanwhile, Australia has extended its suspension on quarantine-free travel from New Zealand for another three days. Australia is requiring New Zealanders to quarantine for 14 days in hotels upon arrival.