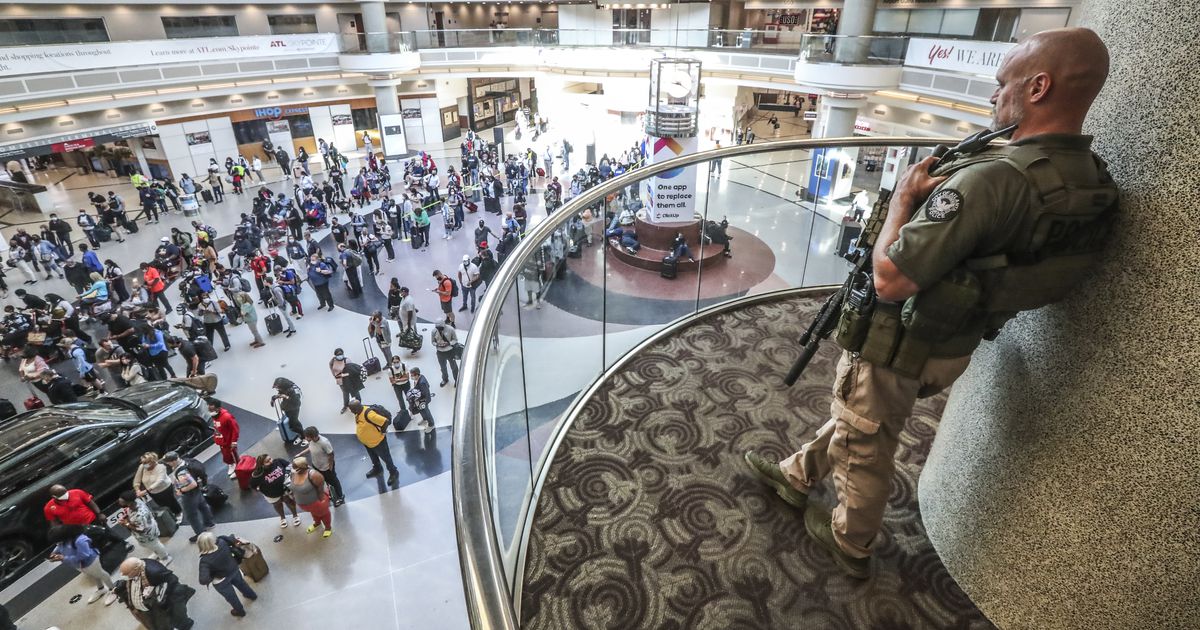 After more than a year of false hopes for a real recovery, the rapid return of hundreds of thousands of travelers streaming into the airport has overwhelmed some parts of the air travel industry that are now being shaken out of suspended animation.

That means there will be bottlenecks at the airport as travel comes roaring back for the busy summer season..

In addition to being in the terminal two hours early, travelers should allow extra time if they are parking, since some parking lots remain closed due to the pandemic and some lots that are open reach capacity during busy periods.

The parking lots start to fill up at Hartsfield-Jackson Atlanta International Airport Sunday, May 9, 2021. STEVE SCHAEFER FOR THE ATLANTA JOURNAL-CONSTITUTION

Parking and security aren’t the only pinch points at the airport. Lines for Southwest Airlines baggage check on Monday morning extended down a hallway inside the terminal, and a queue of travelers outside was waiting for Southwest’s curbside check-in.

Business travelers have been slow to return to the skies, but more people are venturing out for vacations and trips to see family. Since many business travelers don’t check bags, an increased share of leisure travelers typically means more passengers checking baggage.

Dallas-based Southwest said it is fully staffed at Hartsfield-Jackson with more than 600 employees, but acknowledged the long wait times Monday morning. The airline said its leadership team at Hartsfield-Jackson “is aware of (Monday) morning’s issues and remains committed to meeting the demands of the peak travel times as the airline welcomes back additional customers this summer.”

But elsewhere around the airport, airline and airport officials acknowledge that the labor crunch is causing staffing shortages.

Travelers lined up on one side of an airport hallway for the North security checkpoint, while more lined up on the other side of the hallway for Southwest check-in and baggage check.

Delta Air Lines is asking employees at its Atlanta headquarters to help clean and staff airport lounges because of a worker shortage.

The airline told employees its Sky Clubs in Atlanta, which have all reopened, are “severely understaffed,” by 115 people, due to a contractor shortfall.

In a memo, Delta asks employees in Atlanta to volunteer for a few hours to help with cleaning, wiping tables, running food and restocking food buffets.

Delta CEO Ed Bastian said during a CNN interview last week that his biggest concern was having enough workers “not just of our company — because we have our employees there — but the service contractors.”

While CARES Act funding for airlines came with stipulations that restricted carriers from laying off employees, that prohibition didn’t prevent thousands of layoffs and furloughs by aviation contractors, which make up a large part of the workforce at the airport.

“We have been down for about a year now. As you start to turn this big machine on, it takes some time,” Bastian said. “It’s going to be a little creaky for a while, to go from load factors of 40 to 50% to 80 to 90% almost overnight.”

Companies that operate Sky Clubs, restaurants and shops on the concourses also face some additional staffing challenges. Employees who work in areas of the airport beyond security checkpoints must go through extensive federal background checks. That means hiring and security clearances can take longer, and it is often more difficult for employers to find enough workers who can pass the vetting process.

Sodexo is hiring full-time janitorial workers, cooks, dishwashers, food service and wait staff and paying from $10.90 to $13 an hour, and its website touts sign-on and attendance bonuses of up to $2,000, and an employee referral bonus of up to $1,000.

“The service workers in the hospitality sector in the U.S. are straining for workers. But we’re doing what we have to do. We’re having to pay bonuses to bring people in,” Bastian said on CNN.

ExploreAhead of Memorial Day, air travel from Atlanta getting busier

Airport businesses are rushing to scale up operations as Memorial Day weekend approaches, the traditional start of the peak summer season when big crowds are expected.

Delta this month began filling middle seats again, and while the Centers for Disease Control and Prevention has relaxed its recommendations for mask wearing, masks are still required in airports and on planes.

Although the airport’s new South security checkpoint was built with lots of space for queueing, the line spilled out into a hallway.

Hartsfield-Jackson on Sunday reopened its international park-ride deck, and the domestic side of the airport has a new ATL West deck connected to the terminal via SkyTrain. That’s an option for travelers particularly when economy lots are full, since the airport-run park-ride lots at the domestic terminal have not yet reopened.

Airport officials are working on a plan for when to reopen those lots. The airport’s parking contractor ABM-Lanier-Hunt is hiring cashiers, shuttle drivers and supervisors to accommodate the increased demand.

Business reporter Kelly Yamanouchi covers airlines and the airport including Atlanta-based Delta Air Lines, one of the world’s largest carriers, and Hartsfield-Jackson, ranked for years as the world’s busiest airport. She has covered airlines for more than 15 years, graduated from Harvard and has a master’s degree from Northwestern.