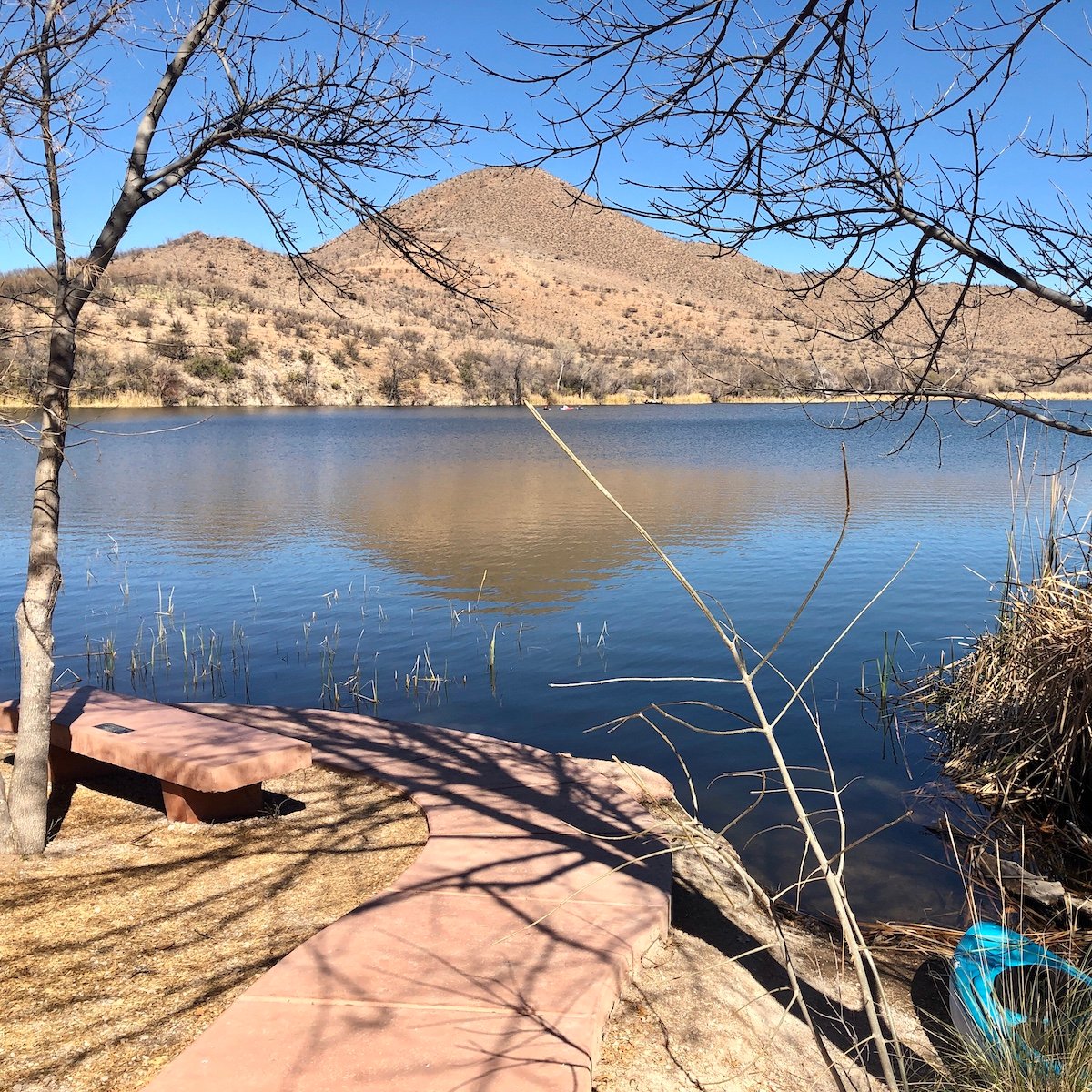 It may come as a surprise to some, but southern Arizona is not only about saguaro cacti and desert sunsets. Somewhat unexpectedly, the arid region also features several pretty lakes and wetland areas teeming with migratory birds. Add in majestic mountain ranges and fascinating historic sites, and you have the makings of a wonderful southern Arizona state parks road trip.

In all, Arizona has 31 state park units. While much of the tourist attention goes to high-profile spots like Sedona’s Red Rock State Park and the Phoenix-area Lost Dutchman State Park, the parks near the southern Arizona community of Tucson, along with those in the southwestern corner of the state, shine brightly as well.

I recently road tripped through the southern reaches of the state and camped at Arizona’s state parks along the way. I was surprised to find a number of southern park beauties that seemed to be fairly unknown to the rest of the state. I especially love the notion of oases in the desert and gravitated to the lakes set amidst the harsh landscape. The historic parks, with their stories of early military feats, also piqued my interest.

Based on my travels and information from Arizona State Parks & Trails, here are seven gorgeous state parks to visit in southern Arizona.

Beaches in Arizona are admittedly few and far between, and for a sandy little swimming beach less than a half-hour drive northeast of the Arizona/Mexico border town of Nogales, locals flock to Patagonia Lake State Park.

Considered a hidden treasure of southeastern Arizona, Patagonia Lake is a manmade body of water created by the damming of Sonoita Creek. The 265-acre lake cuts a vivid blue swath through the region’s brown and amber hills.

Along with swimming, which is popular throughout the warm-weather months, Patagonia Lake offers boating, fishing, waterskiing, picnicking, and bird-watching. Its unique arched bridge that rises over a lake channel is a great place to spot birds in the reeds along the shoreline, or just enjoy the warm breeze.

For a unique place to stay in the area, the park features a 105-site campground and seven camping cabins with beautiful views of the lake. Information on the park admission fee is available here.

Pro Tip: For other things to do in the area, see How To Spend A Day In Quirky Patagonia, Arizona and The Best Things To Do In Historic Nogales, Arizona.

Located downstream from Patagonia Lake along the lower Sonoita Creek, the Sonoita Creek State Natural Area is its own entity within the Arizona State Parks system and has an identity of its own as a world-class birding area.

The lower Sonoita Creek, a perennial tributary of the Santa Cruz River, has a well-developed riparian forest that fosters a great diversity of birds and other wildlife. The Sonoita Creek State Natural Area consists of thousands of acres and includes a trail easement that connects it to Patagonia Lake State Park.

The Sonoita Creek State Natural Area has been designated an Important Bird Area by the National Audubon Society. “If you are a bird watcher you may hit the jackpot here,” the state’s website says. During the spring migration from late January through early April, a guided bird walk could yield sightings of more than 60 species, and the complete bird list consists of more than 300 species. A list of recently sighted birds (as of March 2021) is available here. One of the most sought-after birds is the elegant trogon, which might be seen between November and March. Ducks, rails, raptors, and flycatchers are commonly sighted.

Other animals in the area include creek squirrels, coatis, raccoons, skunks, deer, snakes, javelina, jackrabbits, and an occasional bobcat or mountain lion.

Pro Tip: The Sonoita Creek State Natural Area’s visitor center is located within Patagonia Lake State Park, and entry fees for the lake include the use of the natural area.

A water experience of a different sort is available near the southwestern corner of Arizona at the stunning Buckskin Mountain State Park. The southernmost of the string of state parks along the Colorado River Corridor, Buckskin is known to command one of the finest views along the Parker Strip, an 18-mile stretch of river between Parker Dam and Headgate Dam.

At Buckskin, the stretch of blue Colorado River water is bordered by rugged mountains on both the Arizona and California sides. The park offers mountain hiking, boating, waterfront camping, picnic areas, and basketball and volleyball courts. Entry to the park requires a fee.

With the Santa Catalina Mountains beckoning in the distance, and canyons and seasonal streams dotting the landscape, Catalina State Park provides a delightful respite in the Tucson area.

The park’s 5,500 acres provide miles of equestrian, birding, hiking, and biking trails that wind through the park and into the nearby Coronado National Forest.

Located within minutes of the Tucson metro area, Catalina State Park makes a convenient place to camp while exploring the city and its iconic national park, Saguaro National Park. The state park features 120 campsites that have electric and water and are either tent or RV ready. The campground is located in the shadow of the Santa Catalina Mountains and offers spectacular dusk and dawn views.

Pro Tip: To learn more about car camping in Arizona’s state parks, see my article Car Camping At Any Age: 11 Things You Need To Know.

The story of New Spain’s presidios (forts) is a unique one, according to the park’s website, and Tubac’s primary purpose is to preserve the ruins of the oldest Spanish presidio in Arizona — San Ignacio de Tubac, established in 1752. Tubac is one of few such sites that remain, and its “historic significance is heightened by the rarity of presidio sites,” the website says.

Today, a walk through the Tubac Presidio State Historic Park includes not just the history of the New Spain fort but also of the people who came afterward to live and work in the region. Along with the ruins of the fort, the park preserves one of the oldest territorial schoolhouses, and it exhibits the hand press used to print the first newspaper of Arizona, The Weekly Arizonian, published in Tubac in 1859.

The park website notes that over the centuries, six governments have existed at Tubac: New Spain, Mexico, the United States, the New Mexico Territory, the Confederate States, and the Arizona Territory (State of Arizona).

Pro Tip: The Tubac Presidio State Historic Park is just one aspect of the artsy community of Tubac. For other things to do there, see Art And History In Tubac, Arizona.

For most, the name Tombstone conjures up images of the Wild West and the gunfights that occurred there. Certainly, Tombstone is known mostly as the site of a bloody gunfight that occurred at the O.K. Corral Livery & Feed in 1881, killing three and wounding three others. The legend of the shootout has lasted through the centuries and spawned numerous Hollywood movies.

But a deeper understanding of the town and the region is available at the Tombstone Courthouse State Historic Park, housed in the 1882 structure that served as the Cochise County Seat for decades before the seat was moved to nearby Bisbee in 1931.

The handsome red-brick courthouse, with its cupola-style observation tower and lacy gingerbread cresting, changed hands a number of times before it was converted into a museum in the mid-1950s. It was then transferred to the state as one of Arizona’s first operational state parks in 1959.

Today, the old courthouse houses information on the gunfight at the O.K. Corral, but it also has artifacts from Tombstone’s mining past, including a saloon and gaming room, a period sheriff’s office, and a period lawyer’s office and courtroom. Outside in the courtyard is a reproduction gallows — “the site where many convicted murderers met their fate,” according to the park’s website.

Pro Tip: For more on Tombstone, see The Best Things To Do In Historic Tombstone, Arizona.

Located in the far southwestern corner of the state, the Colorado River State Historic Park near Yuma commemorates the site of an old U.S. Army supply depot that operated between 1864 and 1883. The purpose of the depot was to store six months’ worth of supplies for the forts in the area, according to the park’s website.

Although the depot site has been used by other government agencies over the years, five original buildings remain on the park grounds. Four of the historic buildings contain exhibits on military history, as well as the history of the Bureau of Reclamation’s construction of major irrigation works in the Yuma area during the early 1900s. The park’s visitor center features an exhibit on the military history of the Yuma Quartermaster Depot and includes a model depicting the depot’s appearance in 1872. Park admission information is available here.

Pro Tip: For other Arizona state parks worth checking out, see my article 8 Arizona State Parks That Belong On Your Bucket List.