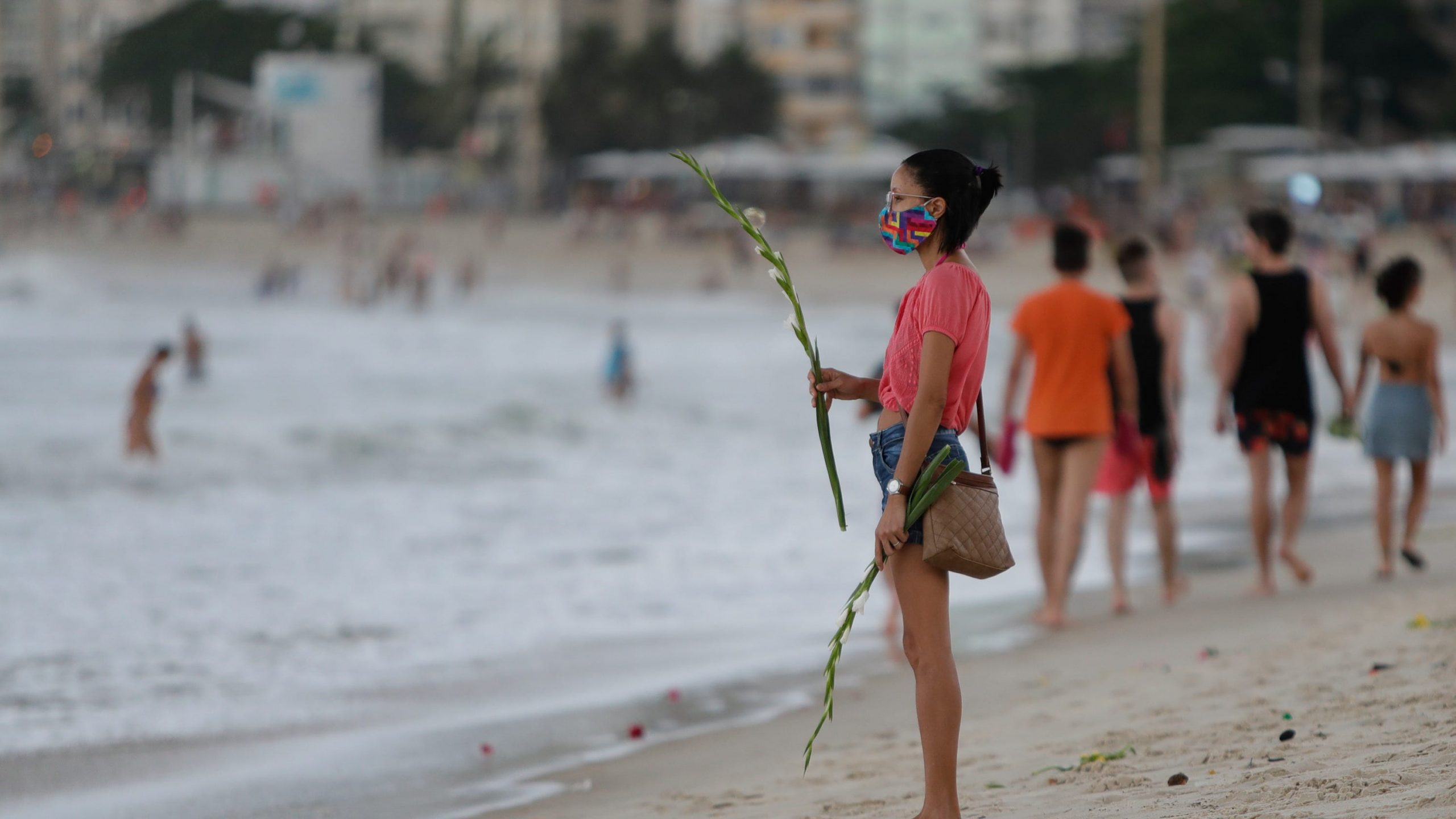 Brazilian President Jair Bolsonaro may think the COVID-19 pandemic isn’t that big of a deal. But don’t tell that to a Rio taxi driver whose son succumbed to the disease (Dec. 16)

SAO PAULO (AP) — The night before New Year’s Eve in Rio de Janeiro, thousands of revelers clad in their bathing suits crowded onto the iconic Ipanema beach to have some seaside drinks. It was one of many open-air parties occurring along Brazil’s vast coastline since the summer heat set in, and as the COVID-19 death toll climbed higher.

“It was so packed, you couldn’t set foot on the beach,” said a maintenance worker at a luxury apartment building across the street. “And it wasn’t just at night; the beach was packed during the day, too. And no one wears a mask!” he added, insisting on not being quoted by name out of worry the building’s owner would punish him for speaking to a reporter.

The explosion of celebrations came just ahead of a pandemic milestone: Brazil passed 200,000 deaths Thursday, rising 1,524 in the previous 24 hours to a total of 200,498 for the pandemic, according to data released by Brazil’s health ministry. It’s the second highest toll in the world, behind the United States, according to Johns Hopkins University’s database.

Many Brazilians have been straining against quarantine for months, going to bars or small gatherings with friends, but massive blowouts had been few and far between since the pandemic began. Festivities kicked off after the Southern Hemisphere’s summer started on Dec. 21.

While many countries imposed new restrictions to limit the spread of the virus in mid-December, the administration of Brazil’s President Jair Bolsonaro gave its blessing for holiday fun in the sun. Tourism Minister Gilson Machado told radio station Jovem Pan that gatherings of up to 300 people were perfectly acceptable. The decision to impose restrictions is the prerogative of local governments; some that did so saw their rules ignored.

A prominent YouTuber organized a party near a river beach for hundreds of people in Alagoas state, in the country’s northeast region. Days later, local media reported that 47 people, among unmasked guests and staffers contracted COVID-19. At least two were admitted to intensive-care units.

A five-day New Year’s bash drew 150 people near the property owned by soccer star Neymar outside Rio, although he denied any association with the VIP event.

Outside Sao Paulo, Bolsonaro kicked off 2021 by jumping off a boat and swimming towards a throng of unmasked, cheering supporters.

And cops in the city of Bertioga on Sao Paulo’s coast used tear gas to disperse a celebration in the early hours New Year’s Day.

“Right before the parties, the situation was already getting bad. But this week or next, it will get even worse,” Domingos Alves, an adjunct professor of social medicine at the University of Sao Paulo, told The Associated Press this week.

Intensive-care units in many cities are once again slammed with COVID-19 patients. The mayor of Amazonas state’s capital Manaus — which one local study speculated may have reached herd immunity after its brutal first wave — declared a 180-day state of emergency Tuesday and suspended all permits for events. State authorities prohibited all nonessential activities for 15 days in most of the city

The city of 2.2 million has recorded 3,550 deaths since the start of the pandemic, and the number of COVID-19 burials has surged. Outside at least one graveyard, cars lined up filled with people waiting to bury their loved ones.

Vanda Ortega, a volunteer nurse in Manaus’ Community of Indigenous Nations, told the AP the city had adopted a hands-off approach toward the virus, first during November local elections with large rallies and long lines of voters.

“Then we had the holiday season, with a lot of secret parties,” said Ortega, who belongs to the Witoto ethnicity. “We live in an area where rich people have cabins. They have parties every week.”

Images of traffic jams and packed beaches, with crowds largely unmasked, were so jarring that European Union commissioner Paolo Gentiloni expressed his disbelief on Twitter, saying “I saw shameful images from Brazil.”

And Bolsonaro — who has consistently downplayed risks of the virus despite catching a case himself — signaled with his New Year’s swim that he will continue to ignore protective measures observed in most countries.

“I dived in with a mask on so I wouldn’t catch COVID from the little fish,” he joked a few days later outside the presidential palace.

Even some Brazilians who consider themselves cautious are letting down their guards. Soccer fan Ricardo Santos, 46, says he covers his face each time he goes out, carries hand sanitizer in his bag and observes social distancing. But on Wednesday, he and a dozen of other Palmeiras fans hit a bar in downtown Sao Paulo to watch their team play.

“I spent New Year’s with only two friends who live in the same building. I take precautions. But sometimes you have to accept a little risk to preserve your mental health, too,” Santos said.

Back on Rio’s Ipanema beach, Joao Batista Baria, 57, said he blamed authorities for not protecting its poorest residents.

“Everyone is talking about these beach parties, but crowding also happens on the bus, on the subway,” Baria said while cleaning the foldable chairs tourists and residents rent to soak up the summer sun. “People come to the beach because they choose to. I need to take the bus to get to work.”