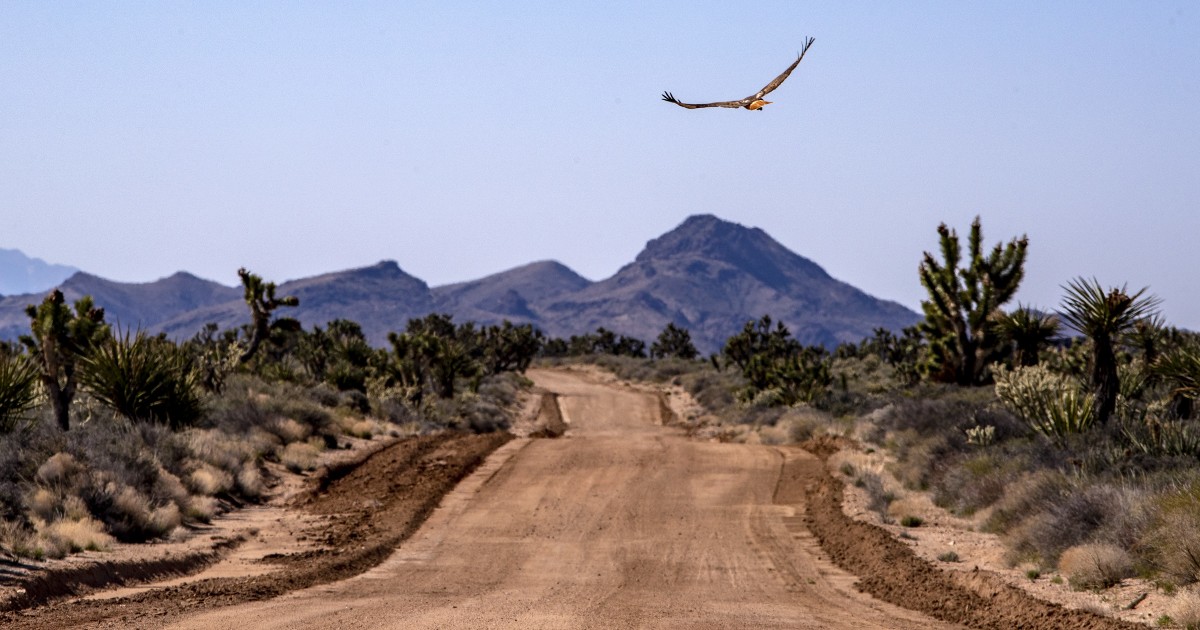 Just minutes into our trip along California’s storied Mojave Road we encountered the first obstacle — some 20 yards of water between us and the way forward.

I walked the weedy stretch of the Mojave River, testing the depth with a stick. Two feet here, three there. Could the Jeep Wrangler make it?

I jumped back inside.

“The secret is to keep the wave moving in front so it doesn’t stall us out,” I told Brian, my traveling companion.

There was a certain romantic irony to drowning in the desert, but the reality didn’t appeal to me.

Still, we were embarking on a major road trip and, barring a less exciting detour, this was the way ahead.

We slipped slowly into the river. A wave formed near the hood and moved in front. So far, so good.

Then it got deeper. We tilted alarmingly left; it felt as if we were floating. The Jeep stabilized and seconds later we lumbered up the other side of the river into the desert.

We had passed the first test, but more were on the way.

The Mojave Road is considered one of the nation’s best backcountry journeys. The rugged former wagon trail is a drive through history and some of the best desert landscapes in America, stretching roughly 140 miles from the Colorado River near Fort Mohave, Ariz., through the Mojave National Preserve, before petering out past Camp Cady east of Barstow.

It began as a trade route for the Mojave people, following watering holes as it linked trails leading to the coast. The Spaniards and the U.S. military later used it. The ruins of Ft. Piute and Camp Cady can be found today along the road.

I had wanted to drive the Mojave Road for years but was intimidated by the obstacles and the prospect of getting lost in one of the remotest spots in California. Last spring I was ready. I had a rented Jeep with 10 inches of clearance and packed it with 10 gallons of water, a four-pack of stout, jerky, three Sumo mandarins, umpteen granola bars, instant coffee, tent, map, shovel, flashlight and a companion well versed in off-roading.

Many do the road east to west, but for logistical reasons we went west to east. We took Interstate 15, exiting on Afton Road some 35 miles east of Barstow. The dirt road ran past a campground and then hit the water. We crossed and entered Afton Canyon, sometimes called the Grand Canyon of the Mojave for its size and geological wonders.

We were immediately surrounded by dun-colored mountains shot through with caves and slot canyons. The Mojave River, which rarely appears above ground, meandered along the canyon floor lined with pale green reeds.

We were now on the Mojave Road, following a set of railroad tracks. A slot canyon appeared on the right. We stopped and went inside. The sunlight faded as we walked farther in, eventually hitting a rock wall. You could spend days exploring these canyons, but we had a lot of road to cover. And something was weighing on my mind.

Soda Lake, the dried alkaline ghost of ancient Lake Mojave, loomed ahead. Recent winter rains had turned it muddy. We could detour or cross it and risk getting mired in corrosive muck.

I still had a few hours to worry. For now, we were motoring across sandy washes and beneath railroad trestles. We crossed the river again. It was shallow here. Side roads appeared and vanished. We occasionally drifted off course.

I cursed myself for not buying Dennis Casebier’s classic `”Mojave Road Guide: An Adventure Through Time” before leaving.

I had interviewed him in 2008 when he was creating a library and amassing the Mojave Desert Archives in tiny Goffs, Calif., on the edge of the Mojave National Preserve.

Casebier, now 86, used old maps to locate the Mojave Road. By 1983, he and a group of intrepid volunteers had turned it from a defunct wagon trail into a four-wheel-drive dirt track. They erected rock cairns along the way, which remain invaluable to route-finding today.

We burst out of Afton Canyon into a stunning white-sand desert of dunes and chocolate brown mountains. A series of jarring hummocks kept our speed low as we entered the Mojave National Preserve. Just ahead, the white, chemical belly of Soda Lake gleamed in the sun.

First we stopped at a massive rock pile known as the Travelers Monument. Tradition holds that every traveler contributes a rock to the pile. The Mojave Road is rife with such eccentricities. In one place, sojourners drop a penny into a can hanging from a tree. Elsewhere, a collection of toy frogs and gnomes has sprung up.

I stood on the narrow road across the lake. It felt solid. We could probably make it if we kept moving and didn’t veer off. So we went for it.

The Jeep bounced maniacally. The center of the road thumped against the undercarriage. White clouds of dust billowed behind us. We slipped and swerved, but in about four miles we reached the other side.

This was a world of extinct volcanoes and ancient lava flows. We crossed Kelbaker Road and drove up Aiken Mine Road to see the remnants of a lava tube. A ladder led down into a dark cave illuminated by a broad shaft of late-afternoon sunlight.

After exploring a bit, we headed off to find a camping spot. Then we came across another oddity of the road, the Mojave Mailbox, placed here in 1983 by Friends of the Mojave Road, a volunteer group. Travelers sign in and detail road conditions. Many leave things.

We found a Soundgarden CD, a can of chili with beans, half a toilet paper roll and a doll dressed in a Valvoline oil shirt. The nearby American flag was swiped recently and replaced with the flag of Lichtenstein. The Mojave Desert Heritage & Cultural Assn., which helps preserve the road, swiftly put it back.

That night, we camped near a tower of rocks. It was windy and cold. Coyotes yelped, night birds chattered. At dawn I scaled the mountain before us and looked over the vast Eastern Mojave — parched, desolate, utterly lonesome. Beautiful.

By 8 a.m. we were back at it. We had covered maybe 75 miles the first day. The road was better here and the views stunning. The New York Mountains stood ahead, fronted by vast alluvial fans.

And the Joshua trees were no longer just here or there. They were everywhere.

We had entered a massive Joshua tree forest. The spiny giants, arms dangling, crowded both sides of the narrowing road. We hopped out and walked among a lush landscape of sharp yuccas, prickly cholla and clusters of barrel cactuses. Jackrabbits and quail zipped past.

We crossed Kelso-Cima Road, picked up smooth Cedar Canyon Road, and hopped back on the Mojave.

The deeply rutted road led us out of the Lanfair Valley and down into Piute Valley. Portly barrel cactuses with reddish spines studded the scrubby hillsides. A pair of Land Rovers approached. The drivers waved as they went past. In two days, we had seen just three vehicles.

It was getting late, so we decided to end our journey where the road meets Highway 95 north of Needles rather than drive the final leg to Ft. Mohave.

I now understood why the Mojave Road inspired such a following. It promises solitude to the desert rat, excitement to the off-roader and camaraderie to those seeking adventure together.

The older I get and the shorter life becomes, the more I crave such experiences. I can’t wait to do it again.