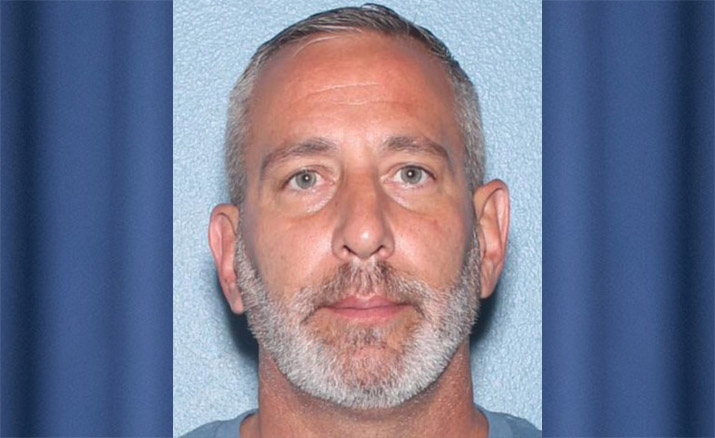 Editor’s Note — Continuing through Jan. 22, Yavapai Silent Witness will be running its 47th annual Catch 22 program. During this period, the Courier will assist local law enforcement in highlighting one fugitive each day to garner the public’s assistance in locating these individuals so law enforcement can take them into custody. Since the Courier prints five days a week, look for two entries in the Friday and Sunday editions and online at dCourier.com.

On Sept. 23, 2020, around 8 a.m., deputies went to a home in the 27000 block of East Grandview, Congress, regarding a vehicle spotted that was involved in an ongoing trespassing/vehicle theft case. As deputies approached the home, they saw 47-year-old Brian Aurelio look at them and run. Aurelio exited the home by smashing through a closed window and apparently injuring himself evident by a pool of blood nearby. Deputies saw Aurelio jump a fence and enter a travel trailer parked on the property.

As they neared the trailer, deputies heard a woman yell, “He’s got a gun.” Aurelio told the deputies he was not going to jail and intended to kill himself. As deputies attempted to talk with Aurelio, he came out of the trailer holding the woman around the neck as a hostage and indicating he was armed. Aurelio was able to access a quad vehicle parked nearby and took off with the woman as his passenger.

With the help of air support from a DPS Ranger crew, an extensive search for Aurelio continued throughout the day. Although he was not located, the woman he left with was found by Wickenburg Police just before 3:30 p.m. on Highway 93 at Scenic Loop Road. She told officers she had convinced Aurelio to let her go and was unharmed otherwise.

A short time later, the quad was located about a mile in from Highway 93 on Scenic Loop Road. It had been abandoned and Aurelio was not found.

As a result, Aurelio has several charges pending to include Kidnapping, Endangerment and Resisting Arrest. There are additional charges for Aurelio in unrelated cases which include three counts of Burglary, Possession of Stolen Property, and two counts of Vehicle Theft.

Aurelio is also wanted on a myriad of other warrants, including a fully extraditable no-bond warrant out of Idaho for resisting/obstructing, Carrying a Concealed Weapon, Escape, two counts of Burglary, and Grand Theft; a warrant out of Coconino County for Burglary with a $5,125 bond; a warrant out of Mohave County for Interference with Criminal Proceedings; a warrant out of Pinal County for Driving Under the Influence of Drugs; and finally, two warrants out of Maricopa County for Larceny and a Probation Violation. Aurelio is known to abuse drugs and to be an escape risk.

Aurelio is described as a white man 5-foot-6, 175 pounds, with gray hair and green eyes. His most recent address is on 136th Lane in Peoria, Arizona. He may have a substantial scar on his left arm from the above, local incident. Aurelio may be armed.

Due to the seriousness and pattern of his criminal activity, a reward of up to $650 is being offered for information leading to Aurelio’s arrest. To earn the reward, you must call Yavapai Silent Witness at 1-800-932-3232 or submit a tip at www.yavapaisw.com. All tips are anonymous. You never have to give your name.