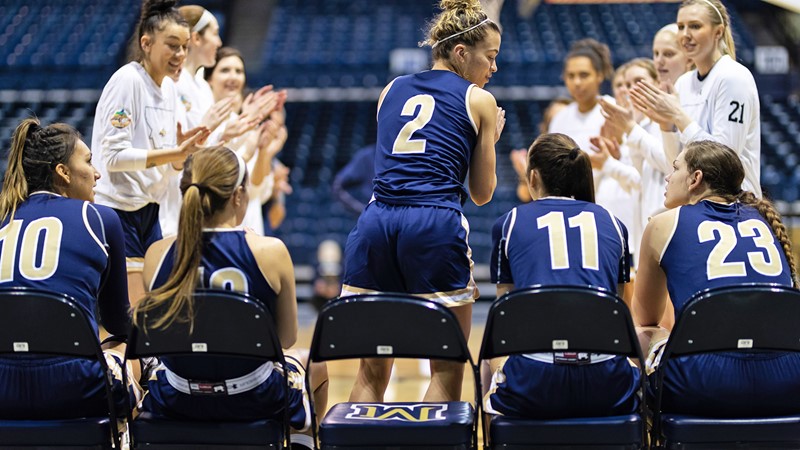 ON A ROLL:  The Bobcats will look to extend its current six-game win streak when it plays a weekend series at Eastern Washington on Thursday and Saturday in Cheney, Wash. Montana State will face the Eagles, Thursday, Feb. 11 at 7:05 p.m. (MT) at Reese Court. MSU and EWU will conclude the series on Saturday, Feb. 13 at 1:05 p.m. (MT).

BOBCAT PLAYER OF THE WEEK:  Sophomore Darian White was named the Bobcat Player of the Week for her efforts as Montana State swept Weber State in Worthington Arena last weekend. The Boise, Idaho product averaged a team-best 15.5 points, 3.5 rebounds, 2.0 assists and 1.5 steals, while averaging just 19.3 minutes of action. Additionally, White shot 62% from the field, connected on 4-of-6 from long distance and shot 77.8% at the line. She had her best offensive game on Thursday with 17 points, shooting 60% from the floor and 75% from the stripe.

STATISTICALLY SPEAKING:  The Bobcats strength this season has been its balance and depth. Of the 15 players that have seen action this season, twelve have posted at least one double-figure scoring game. Darian White leads the team with 14 double-digit scoring games, followed by Tori Martell (9), and Gabby Mocchi (6).

THE SCOUTING REPORT:  Eastern Washington – The Eagles enter Thursday’s contest 6-11 overall and 5-7 in Big Sky Conference play. Last weekend, Eastern Washington dropped a pair of games to Idaho, losing 79-69 in Cheney, and 85-56 in Moscow.  In its Thursday night loss to the Vandals, EWU was led by Grace Kirscher with 24 points. The 6-0 junior forward from Sandpoint, Idaho connected on 10-of-17 from the field, including three 3-pointers. Aaliyah Alexander and Maisie Burnham were also in double-digits with 16 and 10 points, respectively. On Saturday, Burnham posted 14 points and Kirscher 10 to pace EWU. On the season, four Eagles average double-figures led by Burnham (14.4 ppg), Alexander (11.9 ppg), Kennedy Dickie (11.6 ppg) and Kirscher (11.1 ppg). Under the boards, Eastern Washington is led by Dickie and Burnham, who average 5.9 and 5.8 rebounds per game, respectively. EWU is under the leadership of Wendy Schuller, the longest tenured coach in the Big Sky Conference, who is in her 20th season in Cheney.

PRESEASON ACCOLADES: Montana State sophomore Darian White was named to the preseason all-Big Sky team voted on by BSC head coaches and media members. White, a product of Boise, Idaho, was the 2020 Big Sky Freshman of the Year, after helping the Bobcats to a 25-6 overall mark, a dominating 19-1 league ledger and a Big Sky title. In what was arguably one of the best inaugural campaigns in MSU history, White collected 394 points, 150 rebounds, 104 assists and 76 steals. She played and started in all 31 games, averaging 12.7 points, 4.8 rebounds, 3.4 assists and 2.5 steals per game. White, who recorded 25 games in double-digit scoring, notched a season-high 23 points in MSU’s win at Eastern Washington connecting on eight-of-15 from the field and six-of-six at the line. She finished 25th in the nation in steals and 31st in the country in steals per game. In MSU’s two victories at the Big Sky Tournament, White averaged 19 points, 4.5 rebounds, 2.5 steals and 2.0 assists.

A LITTLE BIT OF TORI:  Tori Martell, a product of Somerset, Wis., moved up the all-time Montana State three-point made chart. Martell has 187 career 3-pointers, which ranks third all-time. Ahead of her on MSU’s all-time list are Katie Bussey (254), and Hannah Caudill (231).  Martell’s career 36.7% shooting from beyond the arc ranks eighth all-time at Montana State.  Her eight 3-pointers against North Dakota on Dec. 6, 2020 broke the MSU school-record of seven previously held by Amy Meckling (Jan. 2, 2000), Brandi Lewis (Feb. 13, 2003) and Hannah Caudill (Jan. 28, 2017). Martell’s total is tied for third most in the nation this season. She is currently second on the team in scoring, averaging 12.3 points per game. Martell has been in double-digit scoring on nine occasions this season, including a career-best 26 points against North Dakota.

DARE TO BE:  Sophomore Darian White has picked up where she left off last season. The preseason All-Big Sky Conference selection leads the Bobcats and is fifth in the Big Sky averaging 14.8 points per game. She’s been over the 20+ point mark on three occasions, with a career-best 24 points in MSU’s win at Portland on Dec. 17. White, a graduate of Mountain View High School in Boise, Idaho, also leads the team in assists (64), steals (41) and free throws made (76). In addition, White is averaging a team-best 5.1 rebounds per game. She recorded a career-high 11 rebounds at Portland.

ALL JACKED UP:  Madison Jackson, who was sidelined for seven games, returned to action against Northern Arizona on Jan. 21. The Parma, Idaho product has seen her minutes increase since her return. Last weekend against Weber State, she averaged 6.0 points, 2.0 rebounds and 1.5 steals per game. In Thursday’s win over the Wildcats, Jackson notched eight points, which included a 2-of-2 effort from long distance. Jackson had her best game of the season at BYU on Dec. 10. She tallied 11 points, her first double-digit output since notching a career-best 15 points at Eastern Washington last January. At BYU, she connected on a career-best nine-of-nine from the line.

KUDOS TO KOLA:  Sophomore Kola Bad Bear has played and started in all 16 games to date. The 6-2 product of Billings Senior is averaging 5.6 points and 2.6 rebounds per contest. Bad Bear had her best outing of the season at Portland State on Jan. 14 posting a career-high 16 points, connecting on seven-of-10 from the field. She has been in double-digit scoring on three occasions. Bad Bear pulled down a season-best six rebounds at BYU on Dec. 10. On the season, she is fourth on the Bobcat squad shooting 80% at the free throw. Bad Bear has converted 24-30 charity tosses. Her 24 makes are second highest on the squad.

EASY PEASY:  True-freshman Katelynn Limardo has started all 16 games for the Bobcats to date. The 6-2 product of Silver City, N.M. (a town where lawman Harvey Whitehall was the first to arrest Billy the Kid, known at the time under the alias Henry Antrim in 1875) is averaging 5.8 points per game. Limardo had her best game of the season at Utah Valley scoring a team-high 15 points. Against the Wolverines, she connected on 6-8 from the field and was 3-5 from long distance. Limardo also chipped in four rebounds, two assists, a steal and a block in the win. On the season, she’s averaging 4.6 rebounds per game. Limardo had a season-best eight rebounds in MSU’s win at Portland State. Last week, she averaged 8.5 points and 5.0 rebounds per game.

THE PRIDE OF ROSEMOUNT:  True freshman Taylor Janssen has played in all 16 games, including three starts. She is averaging 15.1 minutes per contest. The Rosemount, Minn., native is averaging 5.8 points per game. Janssen posted a season-high 14 points in MSU’s 102-53 win over Weber State on Thursday night. For the game, she connected on 4-7 from the field, 2-3 from 3-point range and 4-4 at the line.

LAUDING LEXI:   Lexi Deden has played in all 16 games. The 6-1 freshman forward from Missoula is averaging 7.4 points and 4.4 rebounds per contest. Deden recorded a season-high 22 points in MSU’s win over Northern Arizona on Jan. 23. For the game, she connected on 10-14 from the field. Deden finished the NAU weekend averaging 15 points and 7.5 rebounds per game, while shooting 66.7% from the floor. The Deden name is familiar in Montana basketball circles. Deden’s mother Dawn (Silliker) Deden played for Montana from 1984-88. At Montana, she was a 1,000-point scorer and was an all-Mountain West pick. In addition, Lexi’s aunt and head coach at Sentinel High, Karen Deden, was a standout at Washington and is in the Husky Hall of Fame. Last week against Weber State, Deden averaged 8.5 points and 4.5 rebounds per contest.

MENTIONING MOCCHI:  Junior Gabby Mocchi has played in 15 of MSU’s 16 games, including starting the last 10 outings. The 6-1 forward from Champlin, Minn., saw limited minutes early in the season, but had a breakout performance at Utah Valley with 13 points. Mocchi is averaging 9.3 points per game, while shooting 45.2% in Big Sky action. She recorded a career-high 18 points at Portland State on Jan. 16.

SKYE’S THE LIMIT:  Skye Lindsay, who sat out last season after transferring from Pepperdine, has seen action in eight games and is averaging 3.8 points and 3.1 rebounds per game. The Orem, Utah product posted a season-best 11 points in MSU’s win at Portland. Lindsay played her first Big Sky games of the year against Montana and notched six points and four rebounds in MSU’s 70-60 win over the Lady Griz.

DON’T MESS WITH TEXAS:  Leia Beattie, a product of Midland, Texas, posted a season-best 14 points in Montana State’s win over Northern Arizona on Jan. 23. For the game, she went 5-of-7 from the field, including three 3-pointers. Beattie also has familiar Montana basketball pedigree. Her mother, Kelly (Pilcher) Beattie was a two-time All-Big Sky selection for the Lady Griz and is 6th all-time in assists. In addition, her 15 assists vs. Boise State and No. Arizona still rank first in single-game history. Beattie’s aunt/coach at Midland Christian Academy, Carla (Beattie) Cunneen, is also a former Lady Griz and was the 1996 Big Sky Sixth Player of the Year.

ASHLEY’S ACCOLADES:  Junior Ashley Van Sickle has averaged 5.0 points per game over the last seven outings and has connected on 9-14 triples (64.3%) from long distance during that same time frame.