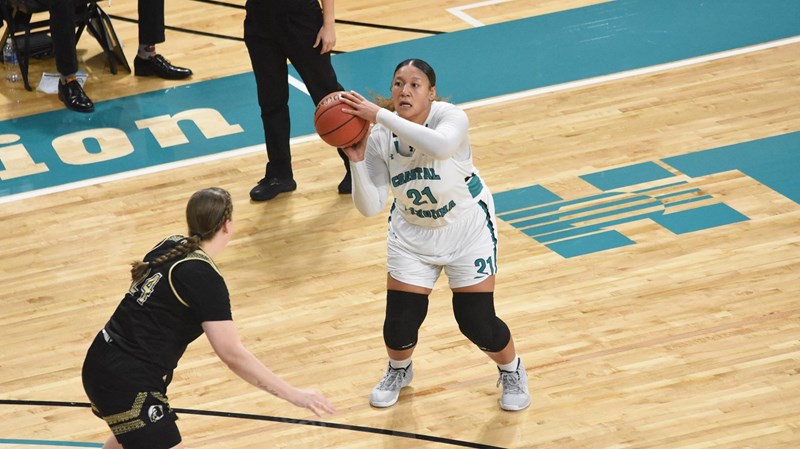 CONWAY, S.C. – Coastal Carolina’s women’s basketball team will travel to Mobile, Ala., this weekend for a two-game series against South Alabama to open Sun Belt Conference play.  The Chanticleers and Jaguars will tip-off at 5 p.m. ET on Friday, Jan. 8, in the first of the two games with the second set to tip-off on Saturday, Jan. 9, at 5 p.m. ET.

Coastal (3-1) will be taking the court for the first time since Dec. 11, 2020.  The Chants have had three games canceled and two more postponed due to COVID-19 protocols and procedures.  The two postponed conference games against Georgia State, originally scheduled for Jan. 1-2, have not yet been rescheduled.

The Chanticleers are led by preseason All-Sun Belt selection Aja Blount.  The junior forward leads Coastal in scoring and ranks fifth in the Sun Belt with 17.8 points per game and is tied for the team lead and ranks seventh in the conference with 8.0 rebounds per game.  Alana Denson is averaging 10.3 points for the Chants and leads the conference with 4.0 steals per game.

South Alabama (4-4, 1-1 SBC) opened conference play this past week, splitting a two-game series at home against Georgia Southern.  The Jaguars are led by Mahogany Vaught’s 13.9 points per game.  Antoinette Lewis and Devyn Lowe score 13.0 and 12.6 points per game, respectively for USA while Lewis also pulls down 8.1 rebounds per game.

Both games will be broadcast live on ESPN+, the Chanticleers Sports Network at 105.5 Hank FM, and online at www.GoCCUsports.com.