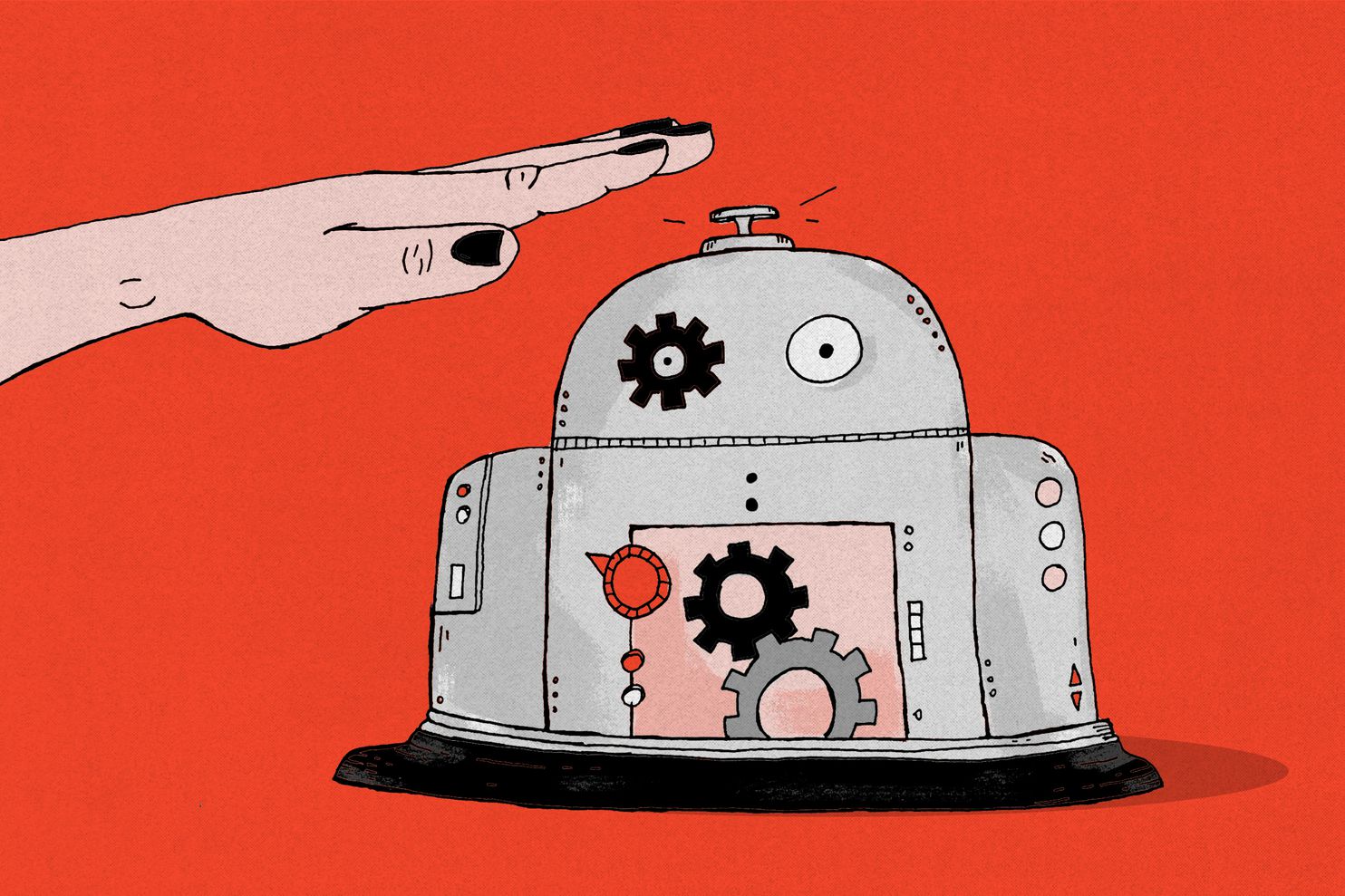 One day last summer, the newest member of YOTEL Boston’s housekeeping team pulled up to work in a big crate.

“It was an imposing box,” recalled general manager Trish Berry, who watched as a team of robotics professionals then unpacked the employee, a tall cleaning bot nicknamed “Vi-YO-Let.” After getting programmed to understand the property’s floor plan, Vi-YO-Let (pronounced like “violet”) began roaming like a germ-zapping Roomba — becoming, in the process, one of the first ultraviolet bots to arrive in a United States hotel.

While Vi-YO-Let, the product of a partnership with Denmark-based UVD Robots, might play cute tunes and light up as she moves, she has a serious job: disinfecting the air and surfaces around her. And she does so remarkably well: Her array of UV lights, which look like a bundle of lightsabers, kill more than 99 percent of viruses and bacteria, including the coronavirus.

“It gave me a little peace of mind that I could offer something extra for our guests,” Berry said, and it seems to give travelers the same. More and more guests are requesting the robo-cleaning package, currently a complimentary add-on. “Cleanliness is now the new luxury,” Berry said.

[This is everywhere you should be sanitizing in your hotel]

The cleaning routines at most busy airports and hotels had remained relatively unchanged for decades. But as the pandemic rages into its second year, major brands are increasingly turning to the world of high-tech disinfection to strengthen their cleaning protocols. It’s a trend that’s slowly transforming housekeeping — and accelerating the pace of automation in hospitality.

Welcome to the ‘pathogen-free sanctuary’

Until recently, only health-care workers would frequently interact with disinfecting bots, which cost upward of $125,000 each. It’s a steep investment, but if it boosts travelers’ confidence, it’s worth it, said Morris Miller, CEO of Xenex, one of several leading companies in UV robotics.

When an epidemiologist founded the San Antonio-based firm in 2008, “the robots were designed and typically used in hospital settings,” Miller explained. But starting last spring, Xenex found rising demand in other sectors, and has raced to keep up since.

The appeal to the hospitality sector of virus-slaying UV light is obvious. Hospitals have found Xenex’s patented machines kill “22 times more pathogens” when compared with a room cleaned to CDC standards alone, Miller said. “The robots [are not] dependent on housekeeping,” he added, framing their consistency in cleaning as a scientifically backed “competitive advantage” travelers can trust.

Claims about the rigor of robot cleaning routines have recently become rather surreal marketing campaigns. Take the Beverly Hilton in Beverly Hills, Calif. The iconic hotel, famous for hosting the annual Golden Globe Awards ceremony, boasts in one promotional video that its Xenex robot staff “zaps every inch before your arrival,” leaving you a “pathogen-free sanctuary” where you’ll “rest assured you’re sleeping in the safest room possible.”

[What to know about getting tested for the coronavirus to travel]

Today, travelers might stumble on UV bots anywhere from five-star hotels and convention centers to train stations and cruise ships. Upscale Hilton and Marriott hotels, airports such as Heathrow and Key West International, London’s St. Pancras train station, and convention centers in Oklahoma City and San Antonio are only a few of the notable hospitality hubs that have hired disinfecting robots, according to spokespeople for several major robotics companies.

In Odense, the “robot capital” of Denmark, the rise of cleaning bots in hospitality has led to a “big increase” in sales for UVD Robots, said PR coordinator Camilla Almind Knudsen. And she predicts the pandemic is only the tipping point.

“We expect the market for autonomous cleaning robots to grow in hospitality as well as other sectors,” Knudsen wrote in an email. She cited a May 2020 forecast from Verified Market Research that projects the market for UV disinfecting bots will grow to more than $5.5 billion by 2027. A fresh class of cleaning bots unveiled at this year’s virtual CES — including a more affordable model from LG — shows how many tech firms believe the robots are here to stay.

A new wave of automation

This is not the first time robots have beeped and booped their way through hospitality.

Aloft Hotel in Cupertino, Calif., rolled out two of the world’s first robotic butlers in 2014. A 2016 partnership between Hilton and IBM led to a trial of Connie, a novelty robot concierge. Before the 2018 Winter Olympics, South Korea’s Incheon International Airport unveiled robots that could help travelers find their gate, among other tasks. And Japan’s famous Henn na Hotel has claimed to be the first hotel staffed by robots, though in 2019, the hotel fired about half of its 243 bots for underperforming (and, alarmingly, potentially exposing guests to hackers and peepers).

But the new wave of pandemic-era robots stands out from such predecessors, both because of the bots’ wider adoption and the more practical jobs they fill. Some robot makers refer to these kinds of bots as “cobots,” a portmanteau of “collaboration” and “robots,” because they’re intended to work alongside people rather than replace them. And while current bots like Vi-YO-Let may not compete with housekeepers, experts say such a future now seems more likely than ever.

[Robot cleaners are coming, this time to wipe up your coronavirus germs]

Back in 2017, spatial economist Johannes Moenius, a professor at the University of Redlands in California, co-authored a report that predicted more than 60 percent of jobs in hospitality-dominated cities like Las Vegas could be automatable by 2025 — job losses that would exacerbate income inequality and disproportionately harm women of color.

At the time, he reasoned that certain hospitality jobs, those where face-to-face customer service is a key part of the experience, were less vulnerable. “If you had asked me a year ago how likely it is we would see a robot waiter, I would say, ‘Yeah, in Tokyo,’ ” Moenius said with a laugh. “That [analysis] has entirely changed now.”

He’s joined in that appraisal by a growing number of experts, who argue the pandemic is likely to accelerate the automation of jobs in sectors like hospitality. “Some share of the population now seek out places where human interaction is avoided,” Moenius said. “That was pretty much impossible for me even to conceive, to imagine, a year ago.”

Where do people go if the robots come for our jobs? It’s a question labor leaders in hospitality have been grappling with for some time.

“I’ve been focused on [the rise of automation] for four years. Candidly, I got focused after going to the CES show here in Vegas in ’17,” said D. Taylor, international president of the Unite Here union, which represents workers in hotels, casinos, food service and more. “If they can develop driverless cars, if they can develop the whole variety of different things I saw there, certainly the jobs in our industry are going to change.”

Elected officials continue to underestimate the economic threats of automation in sectors like hospitality and tourism, Taylor says, which is why Unite Here negotiates “extensive technology language” into its labor contracts. This helps ensure that workers can retrain for new skills, transition to other roles or at least receive severance pay if their jobs are automated out of existence.

But the union also acknowledges the reality: Even as new technologies create new roles, some types of jobs may go away for good. “We’re not a bunch of Luddites. We want to collaborate, not be run over by technology,” Taylor said. That will require hospitality brands not to “disregard the workers that, frankly, got them to the dance in the first place.”

Rest assured, self-sufficient androids like Rosie from “The Jetsons” still seem a far way off. In the nearly six months since starting her new job, Vi-YO-Let has acquired no new skills in folding sheets or fluffing pillows — that isn’t what she was made to do. She has, however, created some new work for the staff.

A few team members at YOTEL Boston have become certified to drive Vi-YO-Let through the hotel’s smaller, harder-to-navigate rooms. “It’s kind of like playing video games,” Berry said. For now, even a state-of-the-art robot sometimes requires the delicate human touch.

The U.S. is requiring covid-19 tests for international entry. Experts say the approach is flawed.

Hitting the road? Here’s what to know about your rest-stop risks.

Will cruises require vaccines? One line just set a standard.