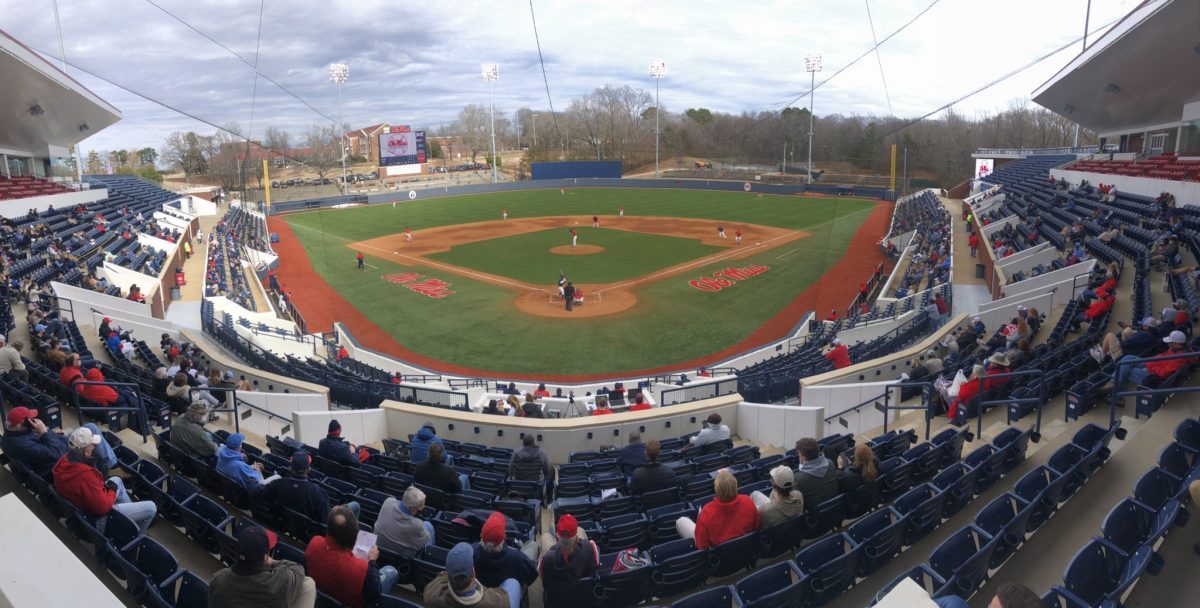 On the weather conditions in Texas and Mississippi causing problems for the upcoming trip to Arlington:

“It does throw a little bit of a curveball to our travel and ops people trying to figure out how we’re going to get there. The good news is we’re going to play. It’s a dome, (but) we just need to get there. They’re getting some weather on Wednesday; we’re getting it on Wednesday as well. One of our biggest issues is getting the buses that have the gear on it, getting them there. That’s probably the biggest obstacle right now.”

On the tournament schedule and his conversation with the Rangers’ representatives:

“They said they will do whatever they need to do to make the tournament and the games go on, even if we had to change the schedule a little bit as far as who plays who on a certain day.”

Bianco did say it is still a little early in the week to determine exactly when the Rebels will depart Oxford.

“I don’t think there will be a doubt we’ll play. At least at this point, I feel very confident in that. But there’s a possibility the schedule could change and even push back, if there’s travel delays, and (we could potentially) play Saturday, Sunday and Monday.”

Even in spite of less than desirable weather conditions in Oxford this past weekend, Coach Bianco was pleased with what the Rebs accomplished during intrasquads.

“All the starters had thrown. We got all the relievers out on the mound at some point to throw an inning or two. Really proud of our guys the way they handled it. Just terrific. They just showed a lot of toughness, a lot of great body language, great energy, and really gutted it out for a couple of days.”

Bianco also talked about the success of the hitters thus far. “We have really swung it well,” he noted. “I’m really proud of the guys. Not always the best weather, but the hitters have been very business-like. They have really dominated the three weekends.”

Coach Bianco was quick to point out that the team’s hitting prowess has not come as a result of poor pitching. “It’s not to say we haven’t pitched well. Gunnar (Hoglund) has hit 95 (mph) every day out. Nikhazy has pitched really well, along with McDaniel and Broadway and others.”

On Sunday, although the weather was not amenable for all players to be able to travel to campus, some of the pitchers were able to get throwing work in and position players who were able to make it in also did some limited weight room work.

Coach Bianco indicated plans for this week are up in the air given the travel conditions in Oxford.

Wes Burton: On the injury front, Coach Bianco reports that Wes Burton is scheduled to throw a bullpen on Tuesday and throw long toss on Saturday. He has been rehabbing with shoulder soreness.

Trey LaFleur: Following an injury to his non-throwing shoulder, LaFleur will be out the first weekend but could be back in the near future. “LaFleur got off to a great start, but got in a collision at first base,” Bianco explained.

“He will miss the first weekend. It’s one of those day-to-day things. He’s done really well in his rehab. He’s farther along than I thought he would be at this point.”

One player currently out with COVID-19

As of Monday, one player has tested positive for COVID-19 and will not travel to Arlington. The next round of COVID testing will take place Wednesday. It has been widely speculated that Cael Baker is the player who tested positive; however, Bianco reiterated coaches are not allowed to say which players have tested positive.

Individual institutional and state guidelines will govern how dugouts, locker rooms and meeting rooms are handled when it comes to COVID restrictions and protocols.

Coach Bianco said some schools might resort to putting players in the stands to reduce crowding in the dugout; however, the Rebels’ skipper said Ole Miss will not be doing that because they do not want to take away any more seats from fans.

He did indicate the Rebels would use the bullpen differently this year because of COVID, much like a pro team would, sending up to 10 pitchers to the pen, where they will sit with chairs spread out to minimize virus transmission. There will be a timer set for 8 – 10 minutes after which players will rotate.  “We’ll have a bit of musical chairs going on in the dugout,” Bianco quipped.

On matchup against TCU:

Ole Miss opens up against TCU in the State Farm College Baseball Showdown Friday. Coach Bianco was asked about the Horned Frogs.

“They have so many older, veteran guys in the line-up,” he said.

“They always pitch well. (Head coach) Jim Schlossnagle does a terrific job. This team is a little scary just in how old they are — a team that went to four college world series in row.  Although that has been a couple years removed, I think, there is the tradition and the belief of those when they get to that program that they are going to be one of the best programs in the country. When you look at this (TCU) team, they have a couple of aces that could start on Friday night and also have a veteran line-up. When you have a guy that could start on Friday night and match-up with anybody and then you have a veteran line-up, it’s a tough match.”

Barring any changes due to weather, the Rebels and Horned Frogs are set for first pitch at 3:00 p.m. Friday.