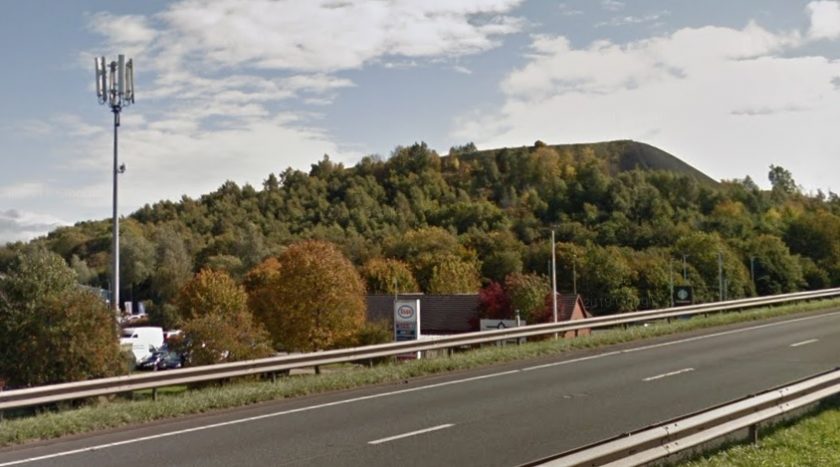 A company has launched an appeal after plans to remove a landmark colliery bank in Wrexham by using the material to make concrete blocks were rejected.

Bersham Glenside Ltd (BGL) was granted permission in 2010 to flatten the Bersham spoil tip, near Rhostyllen.

The decision was made despite opposition from members of the local community, who view it as an important part of the area’s industrial history.

The firm initially intended to take nearly six million tonnes of shale away from the site next to the A483 by lorry.

However, last summer it outlined proposals to create a factory to make concrete building products near the tip itself to reduce carbon emissions.

Officers from Wrexham Council refused the application in October as they said it represented a “significant material change” to the existing planning permission, which was renewed in 2015.

BGL has now appealed to the Planning Inspectorate in an attempt to have the decision overturned after a consultant acting on its behalf said the scheme would deliver “significant benefits” for the area.

In an appeal statement, planning executive Joe Nugent said: “The principle of the reclamation processes has been established by the extant planning permission.

“This is not creating a new land use; it is making an extant land use and process more efficient and able to reclaim the spoil tip in a timelier manner.

“The socio-economic and environmental benefits of the uses delivers significant benefits outweighing the potential effects arising for the development.”

Bersham Colliery closed down in 1986, putting 300 miners out of work.

The local authority originally refused permission for the tip to be removed by BGL, but it was granted on appeal by an inspector appointed by the Welsh Government.

Since then, concerns have been raised by community leaders about the lack of progress made at the site.

Wrexham Council leader Mark Pritchard, who represents Rhostyllen, said last year that there had been several “false dawns” over the project.

He said: “We did meet with the owners of the bank on numerous occasions and they did promise community gains which they’ve reneged on.
“We’ve had lots false dawns on it and lots of false promises on it.

“The last time we had lengthy discussions, they promised us that it would be removed by the Olympics (London 2012).

“They said it was because they wanted the spoil from it for infrastructure and roads for the Olympics.”

A decision will be made on the appeal by a planning inspector at a later date.

Get notified about
news from across North Wales