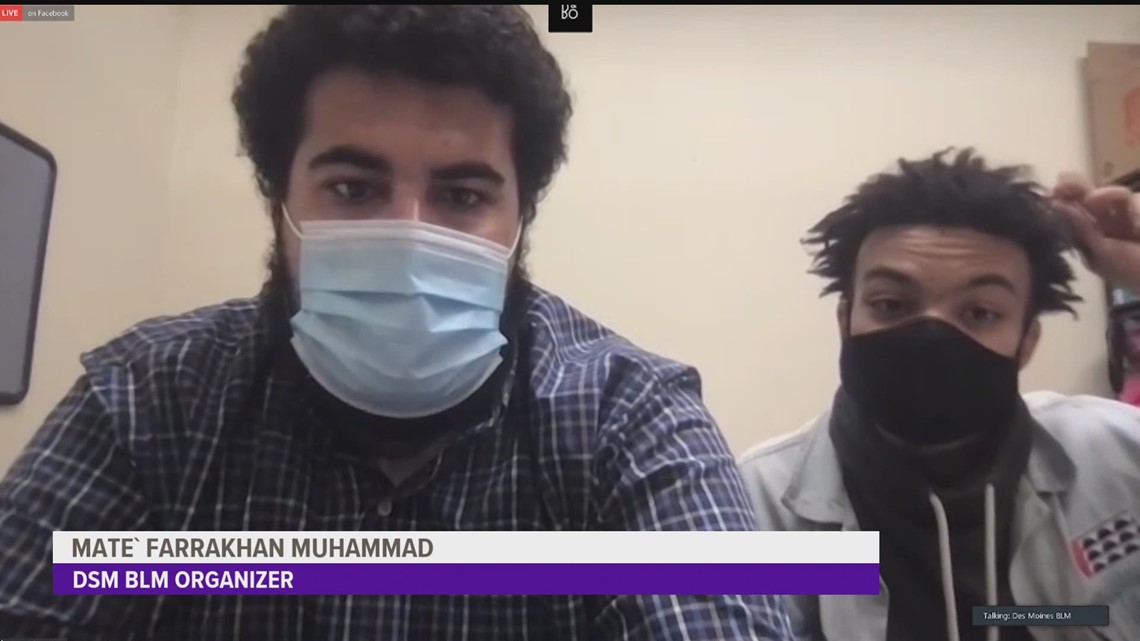 The #BlackEmergencyIA advisory is set to go into effect Saturday ahead of the President-elect Joe Biden’s inauguration Jan. 20 in Washington.

DES MOINES, Iowa — Starting this weekend, a travel advisory reissued by the Des Moines Black Liberation Movement (DSM BLM) will go into effect for all Black Iowans and other people of color.

The Iowa Coalition for Collective Change (ICCC) is also helping with the advisory, which is scheduled to go into effect on Jan. 16-27.

“So last Wednesday, January 6, we all saw as white supremacists attacked the US Capitol,” said Jaylen Cavil, chair of DSM BLM’s advocacy department. “For many, we heard that this was a surprise, but for us at the Des Moines Black Liberation Movement, this was business as usual.”

“Here we are again and I’m tired of doing these press conferences, but unfortunately they are a necessity,” ICCC Executive Director Luana Nelson-Brown said. “The violence that we’ve seen over the past few months continues to escalate.”

“As many are aware, authorities and other outlets are putting out warnings saying that in all 50 [states] and this nation’s capital there will be white supremacist violence that is being planned in the coming week surrounded around the inauguration of Joe Biden,” Cavil said.

That is why DSM BLM is reissuing the advisory.

These are our travel recommendations for Black Iowans during #BlackEmergencyIA. https://t.co/IOQTLMSGkU

The organizations teamed up with DSM Street Medic Corp to activate a hotline—515-850-2395—for anyone who needs a ride or basic necessities delivered to their home from Jan. 16-27.

The hotline can also be used to submit tips on white nationalist or white supremacy activity.

Field Operations Director Matè Farrakhan Muhammad, formerly known as Matthew Bruce, said those who call the hotline can expect someone who is ready to help.

“You’re going to come into contact with somebody that immediately is looking out for your safety. So, it will be very similar to a 911 call except for they won’t send an armed soldier to you,” Muhammad said. “We will send someone to you that is trained in de-escalation practices. We have people that are certified in Narcan distribution.”

Muhammad noted workers are CPR and deep-wound trained and in the field of behavioral psychology and therapy.

“We’re going to just be trying to find out what danger people are in,” Muhammad said. “If they’re in danger, what are their needs? Helping them calm anxieties, helping to put away paranoia and fears.”

The validity of tips and calls will be vetted. Information from the tips won’t be sent to the public due to concerns for public safety.

Watch the full press conference below:


Since the U.S. Capitol riot, ICCC has received reports of other incidents that have happened against the Black community, according to Nelson-Brown. She said they expect the reports to continue.

Those who have experienced violence are advised to contact the coalition to make fill out an application for compensation.

“You have a right to get compensated for a ton of expenses,” Nelson-Brown said. “So please let’s take advantage of that a lot of people in our community in the Black community don’t know that it exists.”