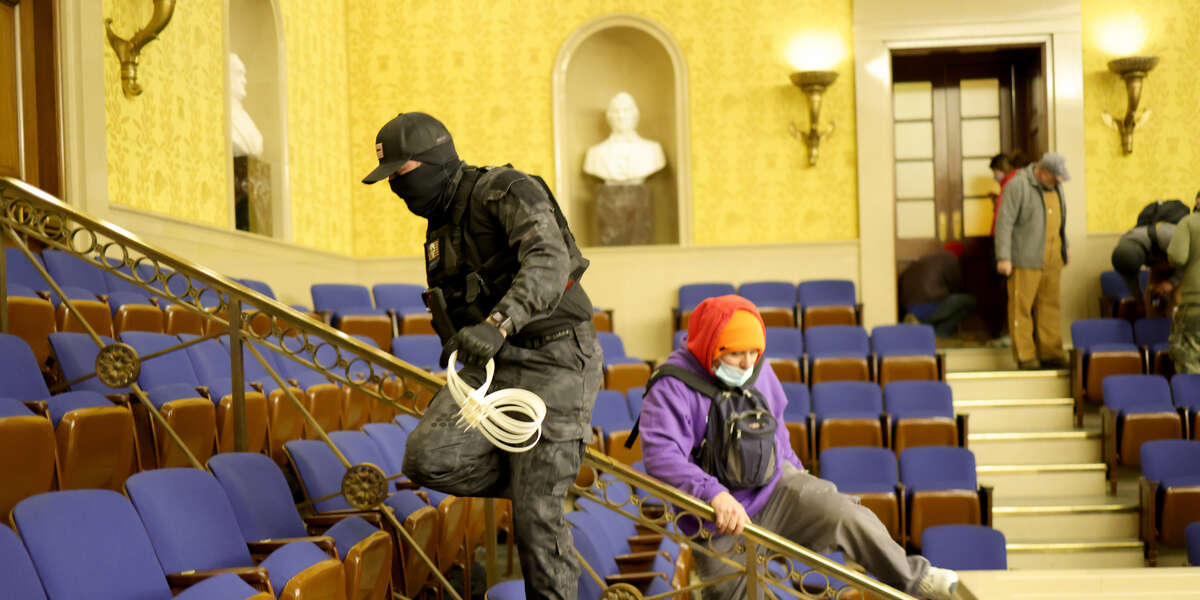 “We’re looking at significant felony cases tied to sedition and conspiracy charges related to the most heinous acts that occurred in the Capitol.”

Officials from the U.S. Federal Bureau of Investigation and Department of Justice gave their first public briefing Tuesday about the deadly pro-Trump riot that left five people dead in Washington, D.C., nearly a week ago.

Federal law enforcement officials have opened at least 160 cases related to the U.S. Capitol attack on January 6, which FBI Washington Field Office ADIC Steven D’Antuono called “just the top of the iceberg.” Officials expect to open “hundreds” of cases related to the riot and have filed charges in at least 70 so far, according to Acting U.S. Attorney for Washington, D.C., Michael Sherwin.

Officials have collected more than 100,000 pieces of digital media during their investigation; they will also look into attacks against reporters and members of the media who were covering the Capitol siege, Sherwin later said.

Despite short and evasive statements from the president and White House press secretary following the riot, the U.S. government has not held a formal briefing on the domestic terror attack until Tuesday. The DOJ did put out a statement on January 8 announcing some initial charges and describing the attack as “lawless destruction.”

The briefing came the same day as news reports suggested that the FBI warned other officials of the threat of violence at the U.S. Capitol a day before the pro-Trump rioters violently broke into the building, forcing members of Congress and their staff to go into hiding.

D’Antuono said Tuesday that the FBI knew “a number of individuals” were planning to travel to the D.C. area “with the intentions to cause violence” ahead of the attack. He said that the FBI “immediately shared that information, and action was taken,” and pointed to the Metropolitan Police arresting Proud Boys leader Enrique Tarrio on January 4.

D’Antuono’s statement directly contradicts Metropolitan Police Chief Robert Contee’s claim one day after the riot that “there was “no intelligence that suggested there would be a breach of the U.S. Capitol.” The attack was discussed and coordinated on social media platforms.

Additionally, Capitol Police Chief Steven Sund resigned from his position the day after the riot. Other lawmakers, including House Speaker Nancy Pelosi (who called for Sund to resign), swiftly condemned how law enforcement responded.

Sherwin said Tuesday that law enforcement is looking at crimes including trespassing, theft of mail, theft of digital devices inside the Capitol, theft of national security or defense information, assault on local and federal law enforcement, felony murder, and civil rights excessive force.

“Just the gamut of cases and criminal conduct we’re looking at is really mind-blowing,” he said.

Sherwin added that initial charges that federal officials have filed are likely to be lesser than final charges, saying, “this is only the beginning, not the end.” He pointed to some of those seen in widely shared imagery, including Eric Gavelek Munchel, who was arrested Sunday after he was allegedly seen inside the Senate chamber wearing tactical gear and carrying zip ties, as well as Richard Barnett and Adam Johnson, whom federal officials arrested last week after they broke into Pelosi’s office. Johnson was seen carrying Pelosi’s lectern.

“We’re looking at significant felony cases tied to sedition and conspiracy charges related to the most heinous acts that occurred in the Capitol,” he added. Some of those cases, if they result in conviction, could carry sentences of up to 20 years in prison.

He continued: “People are going to be shocked with some of the egregious conduct that happened within the Capitol.”

The Washington Post reported Tuesday, hours before the federal officials’ briefing, that an FBI office in Virginia warned officials that extremists were planning on attacking the Capitol and engaging in “war” with lawmakers. Meanwhile, the FBI has also reportedly issued a warning to all state legislators to brace for potential violence and armed protests at each of their state capitals, as President-elect Joe Biden’s inauguration is about one week away.