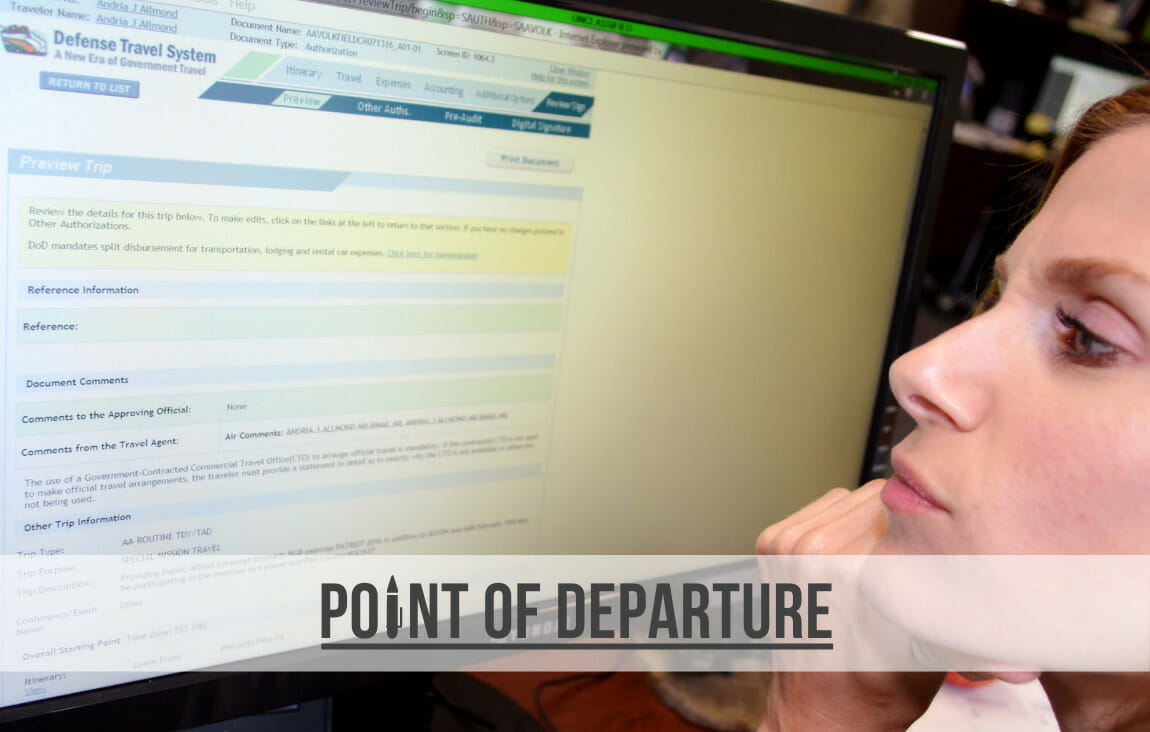 There’s a memorable scene toward the end of the 1989 film, Field of Dreams, where a recently aged Archibald “Moonlight” Graham makes his way through a ghostly cast of baseball legends toward the mysterious abyss in the corn field just beyond the outfield warning track. Just as he prepares to cross into the great unknown, “Shoeless” Joe Jackson calls out to him, “Hey, rookie!” Moonlight turns back for a moment, and Shoeless Joe responds, “You were good.” A slight hint of a smile crosses Moonlight’s face, then he steps into the corn and vanishes.

The Defense Travel System started as a well-intentioned effort to reduce waste and improve efficiency. But, like a lot of Department of Defense initiatives, the system couldn’t deliver on its promises. Since its inception in 1998, the Defense Travel System has been a nightmare: for users, for travel managers, for everyone and anyone who ever had to interact with the platform. Human error still reigns supreme, and where human interface is present, inefficiency soon follows.

Nobody likes the Defense Travel System. Navigating the antiquated and quirky system is like taking a midnight swim in the La Brea Tar Pits. Even when I was traveling so frequently that the process became rote, my travel was often subject to random acts of terror that consumed hours of madhouse phone calls in desperate attempts to avoid getting stranded on a taxiway in Cleveland at midnight (that happened once, actually). It was common to have my government travel card inexplicably deactivated during travel, usually at the most inopportune moments. Return flights would be cancelled without notice or rescheduled to add additional, unnecessary legs. But none of this came close to the migraines caused by the voucher process.

Mistakes to Avoid with DTS

Official travel itself remains a relatively simple process; as long as you stay on schedule, you can usually avoid any direct interaction with the Defense Travel System (the last thing you ever want to do during travel is to remind the system that you’re away from home station). Know what expenditures are authorized, save your receipts, and avoid using your government travel card in places that might create issues for you when you eventually file a voucher. Uneventful travel is good travel.

However, once you enter the post-travel phase, the cursed beast awaits. This is your swim back through the tar pits, and it’s long and often tortuous. Assuming you retained your receipts—and didn’t make the mistake of running up a tab on your government travel card at the Cica Cica Boom club—creating a voucher is honestly not that difficult. Getting that voucher approved, though, is a different matter. For example, federal travel regulations don’t require travelers to submit receipts for expenditures below $75; in many organizations, not doing so will only slow—or stop—the approval process (pro tip: submit receipts for any expenditures you claim). Get everything right and your voucher goes into the approval queue. How long will that take? It’s no coincidence that DTS and DMV have the same number of letters. It might be a while.

DTS REplacement on Its Way

So, when it was announced recently that the Pentagon is preparing to sole-source the contract to replace the Defense Travel System (a process that began three years ago), you might expect a rousing roar of approval from the masses. Masses, worth noting, that have been subjected to three decades of a system so convoluted and capricious that it was euphemistically known to many as the “Don’t Travel System.” But most of us who spent those decades with the Defense Travel System also understand that any replacement—even Defense Travel Modernization—is still going to be subject to the same arcane travel regulations and the same human error. That translates to a fairly high likelihood that even though the system itself might be a significant improvement over its Quasimodo-like predecessor, many of the frustrations common to official travel will remain.

Not even Shoeless Joe is going to save us from this field of nightmares.