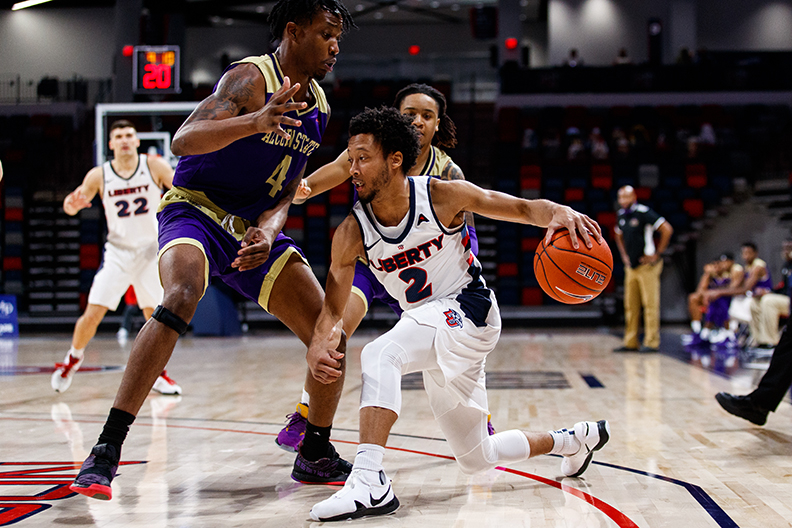 Liberty University’s men’s and women’s basketball teams open ASUN Conference play on New Year’s Day and Jan. 2, respectively, at Lipscomb University — which the Flames defeated in the past two ASUN Championship games — and at home against the Lady Bison.

In the new COVID-19 schedule format, the Flames and Lady Flames will conclude their two-game series the very next day against the same teams at the same locations — with the men playing Jan. 2 at Allen Arena in Nashville, Tenn., and the women hosting Lipscomb on Jan. 3 in the sparkling new Liberty Arena, adjacent to the Vines Center.

The Flames men closed out 2020 by eclipsing the century mark for the first time since 2013 in last Tuesday’s 108-65 win over Alcorn State at home. Their fourth win in a row concluded their non-conference schedule and raised their record to 8-3, while extending their home winning streak to 29 games.

Liberty’s men’s team will be without Head Coach Ritchie McKay for both games at Lipscomb following his testing positive for COVID-19, which was announced Tuesday. McKay is experiencing mild symptoms and expects his coaching staff and players to continue their success in his brief absence.

“I have complete faith in our coaching staff to lead our team through my absence,” McKay said. “Throughout our season our players have been great in dealing with these challenging times and I am confident that they will persevere.”

After staging groundbreaking wins over SEC members Mississippi State on Nov. 26 in Melbourne, Fla., and South Carolina on Nov. 28 in St. Louis, the Flames have won their last four games, all in the cozy confines of Liberty Arena, by an average margin of 44.3 points.

The victory over Alcorn State featured the most points Liberty has scored in one game since Jan. 2, 2010, when it outgunned host VMI, 110-102. All five Flames starters reached double figures in scoring, paced by junior guard Darius McGhee’s 20 points.

McGhee, who was the ASUN Newcomer of the Week award winner four times last season and earned his first ASUN Player of the Week honor on Nov. 30, leads the Flames in scoring (14.5 points per game) and blocked shots (6) and ranks second in rebounds (44) and steals (10). He ranks first in NCAA Division I in 3-pointers made (37-for-92), shooting 40.2 percent from beyond the arc, which is only slightly better than the team’s 40.0-percent average (134-for-335).

Senior forward Elijah Cuffee is the Flames’ second-leading scorer (11.0 ppg) and leader in 3-point accuracy (26-for-49, 54.9 percent), while senior guard Chris Parker ranks third in scoring (9.1 ppg) and first in assists (54) and steals (14), and redshirt sophomore forward Blake Preston is fourth in scoring (8.5 ppg), shooting a team-high 76 percent from the floor, and first in rebounds (66), including 24 offensive.

Before the Lady Flames’ tip off in Saturday’s 2 p.m. series opener against Lipscomb, Liberty Athletics will honor and remember Athletics Hall of Fame Class of 2013 inductee Brenda Bonheim, who founded both the volleyball and women’s basketball programs in the mid-1970s. Bonheim, wife of Flames football assistant and founding men’s wrestling Head Coach Bob Bonheim, died in September after a short battle with cancer.

Next weekend, Liberty’s men will host Florida Gulf Coast University (FGCU) on Jan. 8-9 while its women travel to play the same perennial ASUN power in the Alico Arena in Fort Myers, Fla., Jan. 9-10, in a rematch of the past two ASUN Championship games. Last season’s championship game was canceled by the onset of the pandemic and the Lady Flames, who closed the season on an eight-game winning streak, and defending tournament champion Lady Eagles were deemed co-ASUN champs.

FGCU (7-2) and Liberty (4-3) are projected to finish first and second again this season. The Jan. 10 rematch will be broadcast live at 6 p.m. on ESPNU, marking the first time for an ASUN women’s contest to be aired on national television.

After opening the season by losing three of their first four contests, the Lady Flames have won three in a row, capped by a 76-66 victory at former Big South Conference foe High Point on Dec. 16, before having last Tuesday’s scheduled trip to William & Mary in Williamsburg, Va., canceled due to COVID-19 protocols. Liberty is led in scoring by redshirt senior guard/forward Emily Lytle (17.0 ppg), senior guard Ashtyn Baker (12.0 ppg), and senior forward Bridgett Rettstatt (11.0 ppg).