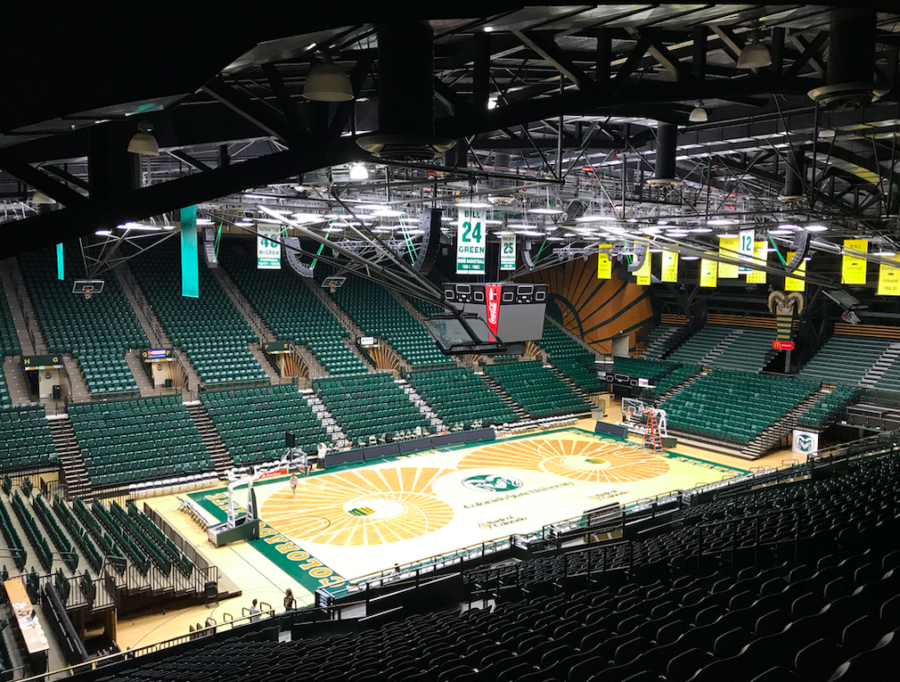 Moby Arena in Fort Collins, Colo., was ready to host a New Mexico-Colorado State men’s basketball game Tuesday night,. But within the hour before its scheduled tip, it was called off because of COVID concerns originating in the Lobo program. (Geoff Grammer/Journal file photo)

At 6 a.m., less than 10 hours after they were pulled off the Moby Arena court as they warmed up for a scheduled 9 p.m. tip-off against host Colorado State, the team boarded a bus – after first being cleared of having any COVID-19 symptoms – and embarked on their 515-mile trek south from Fort Collins on Interstate 25 back to the Pit.

Their welcome home gift after about eight hours on the road was another round of PCR nasal swab tests, for which the university expects to have all results on Thursday morning, before deciding what the team will do next. That would include how to proceed with the program’s next scheduled series against the Wyoming Cowboys on Feb. 17 and 19 in games the Journal has reported will be played at the U.S. Air Force Academy outside Colorado Springs.

All members of the travel party are under quarantine until the test results are available.

UNM is not, nor has it been since the season started, on a “COVID pause” from basketball activities due to a positive test within the program. But 49 other Division I programs are on one this week, according to weekly data compiled by college basketball analyst Jeff Goodman. UNM (5-11, 1-11 Mountain West) did last week, however, choose not to play a two-game series with San Diego State due to concerns it says were COVID-19 related, but not actual positive cases in the program.

As of Wednesday afternoon, nobody in the Lobos travel party had displayed any symptoms or tested positive for COVID-19.

On Tuesday night, Larimer County, Colo., health officials nixed what had originally been an agreement between UNM and CSU to proceed with their late night, FS1-televised Mountain West Conference game after it was discovered on Monday that Lobos assistant coach Scott Padgett had been in contact with somebody over the weekend in Albuquerque who later tested positive for COVID-19. That test result that came after the Lobos were already in Fort Collins.

Padgett and the entire Lobos travel party – players, coaches, training staff, etc. – all took PCR nasal swab tests on Sunday, which came back negative before they flew commercially to Denver on Monday afternoon.

At 8 p.m. Monday, Padgett was told the contact in question had displayed symptoms and tested positive for COVID-19. Padgett immediately isolated from the rest of the Lobos travel party.

Around 5 a.m. Tuesday, the medical teams for both UNM and Colorado State began communicating and the entire UNM travel party was again tested with PCR nasal swab tests. Those results were back well before game time and since again all were negative for the virus, UNM said Tuesday afternoon, the game was still on.

“Then, the more we discussed it and the more we went into the circumstances of what was going on, we felt it in the best interest to make sure that we communicated with their county,” UNM athletic director Eddie Nuñez said. “And once their county, ultimately, took all the information in, their recommendation was that we postponed (Tuesday and Thursday’s games) for precautionary reasons.”

Padgett was deemed by county officials a presumptive positive due to contact tracing.

In a Wednesday tweet, CSU athletic director Joe Parker called it a “(c)ollaborative decision last night factoring in all information.”

UNM senior deputy athletic director David Williams said Wednesday that there have been discussions with Wyoming and Air Force – UNM’s next two opponents – over the matter, and a determination on next week’s series at the Academy will be made after all test results return Thursday.

Either or both games with CSU can be made up if there are mutual schedule openings between now and the Mountain West tournament in March. The same can be true of last week’s missed San Diego State games. If those aren’t made up, the league has not yet said if those games will be counted as UNM forfeits or no-contests.