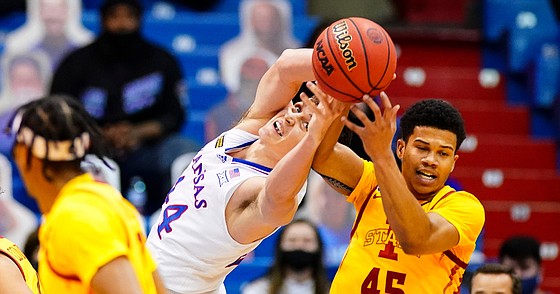 It’s hard to beat a team by 33 points one night and then turn around and play them two days later and expect the same result.

But that should absolutely be the mindset the Jayhawks take into the rematch with Iowa State.

That does not mean that the KU players should leave Ames with their heads hanging if they only win by 20 points. It does, however, mean that they should approach the game with that as the expectation.

Clearly, KU has proven that it can be 33 points better than the Cyclones. And that even came on a night when the Jayhawks still did some things wrong and were hurt by certain things the Cyclones were able to do. KU coach Bill Self mentioned one specific action that ISU ran on offense that worked five or six different times.

“I think we got crushed on it five times,” said Self, who did not point out the specific play. “They only made like six or nine points off of it, but we’ve got to make an adjustment there or something. But, for the most part, we’ll do the same thing, just like they will, too.”

Doing the same thing in terms of sticking to the scouting report and the offensive and defensive game plans does not guarantee the same result.

But, as the team that had the clear advantage in the first matchup and left that one feeling good about itself, the Jayhawks should go into this one with more confidence than they’ve had in weeks.

Whether they turn that confidence into another convincing victory will be determined by how well they execute and how hard they play.

2. Be careful relying on 3-pointers

Kansas was sensational from behind the 3-point line in Game 1 against Iowa State, knocking in 12 of 26 shots from behind the arc, with six different Jayhawks making at least one 3-pointer.

While this team needs to continue to fire away and get hot from 3-point land to reach its ceiling, it should not expect things to come quite as easy in the rematch.

And there are a couple of reasons why.

For one, KU’s 12 3-point makes were the second most the team has hit in a Big 12 game this season (16 vs. West Virginia is the most) and tied for the third highest total all season.

Beyond that, Iowa State’s defense is not usually quite as generous to opposing 3-point shooters.

The 12 makes and KU’s 46.2% clip were both season highs against the ISU defense.

In fact, the Cyclones have allowed just one other opponent (Iowa, with 11) to reach double-digit 3-point makes in a game this season. And only one other opponent (Mississippi State at 42.1%) has shot better than 40% from 3-point range against the ISU D.

Taking things one step further, the Iowa State offense’s five 3-point makes on Thursday night were just one off its season low.

All of this combined means that if KU’s shooting comes back to the averages that the ISU defense typically allows and the ISU offense makes a few more 3-pointers, the game gets much closer in a hurry.

Iowa State made just 3-of-14 (21.4%) from 3-point range in Thursday’s first half and two of 11 in the second half. If that first-half number had been closer to the team’s season average of 34%, ISU would’ve had roughly six more points in the first half and been down by just six at the break instead of 12.

Kansas scored 50 points in the paint on Thursday night against the Cyclones and just 12 of them came from big man David McCormack, who hit five field goals in 10 attempts.

Self applauded KU’s ability to get those points in the paint by driving the ball downhill and running in transition. And one fo the biggest reasons the Jayhawks were able to do either was their defensive activity and intensity.

KU’s active hands and fly-around style led to all kinds of deflections, steals and loose-ball situations. And those often led to easy points at the rim.

While Self and his players have preached defensive improvement in recent weeks as one of the keys to Kansas getting back on track, this area, where defense turns into easy offense, is the dream scenario.

“If we’re going to get to the point where we are good, we need to score off of deflections and steals and long rebounds,” Self said. “We’re not gonna be the type of team that gets the rebound and the point guard goes back to meet the ball and then we go score because we’re not great at that. We’ve got to create some deflections and some loose balls in order to become a good transition team. And I thought we did that in the second half (Thursday night).”

Doing more of that in this game not only will bode well for KU’s chances at pushing its winning streak to three in a row, but also could go a long way toward created the kinds of defensive habits that will serve them well against tougher teams down the road, as well.

Kansas out-rebounded Iowa State by 12 (44-32) on Thursday night, and that was without its two big men, David McCormack and Mitch Lightfoot dooing much of the damage.

McCormack finished with six boards in 18 minutes, but got four of them in the first 2:25 of the game. And Lightfoot, who played 18 minutes off the bench, finished with three rebounds.

KU’s rebounding edge included an 11-9 advantage on the offensive glass, which led to 17 second-chance points for the Jayhawks and just two for ISU.

This is nothing new for the Cyclones, who have been out-rebounded by their opponents all season long. In fact, ISU entered this week’s double-dip with Kansas giving up an average of 39.4 boards per game while getting just 30.6 for a negative rebounding margin.

The Jayhawks, meanwhile, have out-rebounded their opponents, 38.4-30.7, with the KU backcourt contributed nearly just as much as the bigs on the glass.

That was certainly the case on Thursday night, when Jalen Wilson led all players with 11 rebounds (4 offensive), while Christian Braun, Bryce Thopmson, Ochai Agbaji and Marcus Garrett combined to grab 15 boards.

Even if you took away Wilson’s contributions, the Jayhawks still would’ve out-rebounded the Cyclones by one.

ISU is 1-14 in the rebounding battle so far this season, with its lone victory on the glass coming in a win over Jackson State in Game 6, when the Cyclones grabbed 43 boards to JSU’s 35.

KU, meanwhile, is 13-2 this season when winning the rebounding battle and 1-5 in games when it has lost on the boards.

It’s all about momentum for the Jayhawks right now and Kansas is in position to add to its feel-good week by picking up its third consecutive victory. The Jayhawks have not won three straight since early December.

Instead of flying to Ames from Topeka, KU was scheduled to take two buses so the team and staff could practice proper social distancing on the trip. Had they done so by flying, the Jayhawks would have had to take a bigger plane and flown to Des Moines and then drove to Ames anyway.

“You’re not really saving that much time,” Self said Thursday night. “It becomes probably a three-hour trip as opposed to a four-hour trip by bus.”

In addition, the Jayhawks plans called for skipping Friday’s practice in Lawrence and instead doing some kind of light workout and walk-through when they got to Ames on Friday evening.

“That’s the only thing that’s different,” Self said of KU’s practice schedule. “We’re going to stay off our feet until we get there and then we’re going to go practice at Hilton.”

After Thursday’s victory, Self said he hoped, by now, that his team had grown accustomed to playing in half-empty arenas and bringing its own energy to the building on game night.

No place will that be more important — or seem more strange — than ISU’s Hilton Coliseum, which has become known as one of the toughest road venues in the country and given KU all sorts of fits throughout the years.

The Jayhawks, who lead the all-time series with Iowa State 185-66, own a 26-22 record inside Hilton Coliseum, but will be playing in front of just 1,200 or so people when they tip this one off.

“It certainly won’t be like the Hilton Coliseum that we’ve seen many times, when they welcomed us with open arms,” Self joked after Thursday’s victory.

According to oddsmakers in Las Vegas, the Jayhawks, who were 15-point home favorites on Thursday night, are 13-point favorites on the road against the same ISU team.