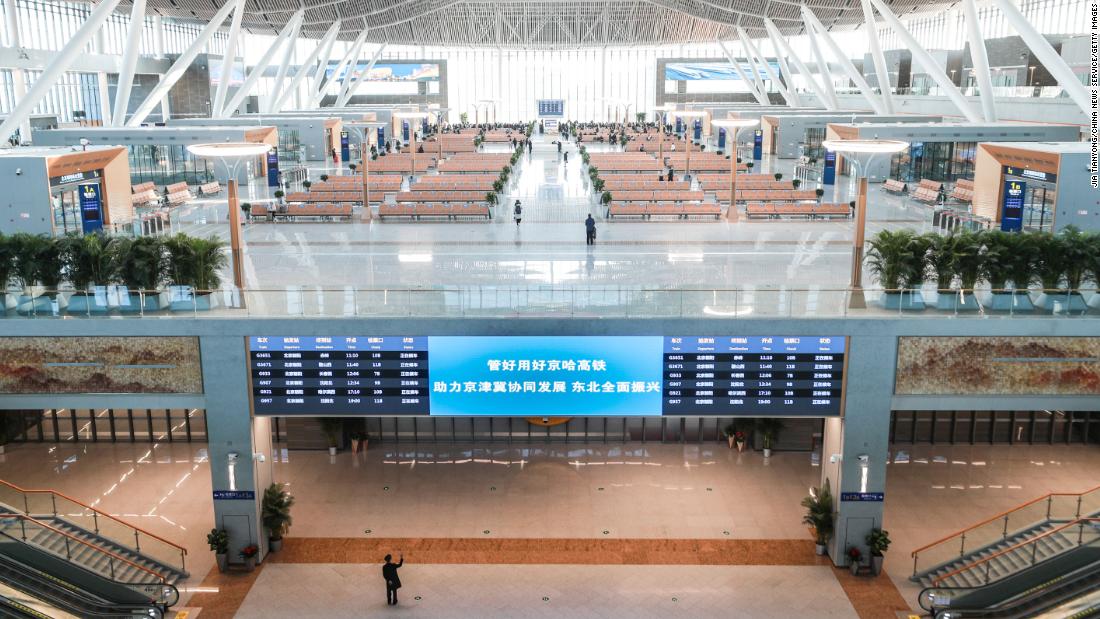 (CNN) — Normally at this time of year, hundreds of millions of Chinese people would be packing highways, trains and planes on homebound trips to celebrate the Lunar New Year with their family.

But this year, the largest annual human migration on Earth has been put on hold, following the Chinese government’s call to avoid “nonessential” trips during the holiday period to prevent a resurgence of the coronavirus.

That is a lot to ask. The Lunar New Year, also known as Spring Festival in China, is the most important holiday in the Chinese calendar — the equivalent of Thanksgiving, Christmas and New Year’s Eve combined.

For many Chinese who left their hometowns for better job opportunities in big cities, it is the only chance they may get to see their families this year. Parents who left children behind in villages so they could work may face another 12 months without them.

Travelers wait in the main hall of the Shanghai Hongqiao Railway Station in Shanghai, China, on January 30, 2019.

To discourage people from traveling, China’s National Health Commission has imposed new rules that require people returning to rural areas to produce a negative Covid-19 test taken within the previous 7 days, and to spend 14 days in “home observation” upon arrival.

Some local governments have added their own, stricter rules. For example, in some places, returnees need to spend two weeks in a government-approved quarantine hotel, instead of remaining under observation at home with their families.

The new restrictions have provoked fury on social media, with some questioning the government’s policy at a time when many people had hoped to go home.

“I would like to ask, did you seriously think about it and look into it before making this policy?” one person posted on Weibo, China’s Twitter-like service.

“Do medical conditions in the vast rural areas allow everyone to have an coronavirus test every 7 days? Doesn’t the gathering for coronavirus tests bring a bigger risk of infection? In addition, the state only gives us 7 days of statutory holiday, and now you ask returnees to be isolated for 14 days. What are your brains made of?”

For months, state media has celebrated China’s success in taming the coronavirus, contrasting its speedy, effective measures with the chaotic approach of some Western governments.

But this year has brought fresh challenges. In January, more than 2,000 positive cases were detected in China’s northern provinces, the worst resurgence of the virus since March.

Given the virus’ rapid transmission, Beijing recognizes the need to move quickly, as do the Chinese people, but that doesn’t mean they’re happy about it.

It’s the second year in a row that the Lunar New Year, which begins on February 12 this year, has been overshadowed by the coronavirus pandemic that has claimed more than two million lives worldwide.

Last year, Beijing’s main train station was overflowing with travelers before the Lunar New Year, as Chinese authorities had not yet announced the coronavirus was transmittable from person to person, or admitted that it was already spreading outside of Wuhan, the epicenter of China’s initial outbreak.

Wuhan was eventually locked down two days before Lunar New Year’s Day, but millions of people in the central Chinese city had already traveled back to their hometowns in the weeks leading up to the holiday, accelerating the spread of the virus.

After the holiday, many were stuck in their hometowns, as new travel restrictions prevented them from returning to the cities where they worked.

A Chinese flag hangs over an empty departure hall at Beijing Chaoyang Railway Station on the first day of the Spring Festival travel rush on January 28, 2021.

This year, the departure hall at the Beijing train station remains largely empty in the lead up to Lunar New Year. The government’s call for people to stay put in the cities where they work has apparently worked.

On the first day of the 40-day Spring Festival travel rush, or “chunyun,” which fell on January 28 this year, Beijing Capital International Airport saw an 86% drop in departing passengers compared with the same period last year. Across the country, the drop in air passengers on the first day of chunyun was 71% compared with last year, according to the Civil Aviation Administration of China.
The Ministry of Transport estimates that 1.15 billion trips will be made during the 40-day Lunar New Year travel period this year, 61% less than in 2019 and 22% less than last year.

If the predictions are correct, it will be lowest number of trips made during Lunar New Year since the government began publishing records in 2003.

China’s plans for Lunar New Year stand in stark contrast to the last major holiday in October, when crowds packed public transport and tourist attractions around the country for Golden Week.

Then, China had not reported any locally transmitted symptomatic case since mid-August, and both the government and the people were confident in keeping the virus under control.

Pictures of domestic tourists cramming the Great Wall were featured prominently in state media, as proof of China’s success in containing Covid-19.

Chinese tourists crowd a bottleneck as they move slowly along the Great Wall of China during the Golden Week holiday in October, 2020.

This time around, Chinese state media is unleashing a very different propaganda campaign, exalting people’s decision to stay put as an act of fulfilling their responsibility to the country — but the praise has not been uniformly welcomed.

“Every Chinese has their special Spring Festival memories. But this year, the Spring Festival will be different from before … Tens of thousands of people have chosen to stay for the Lunar New Year. Their sticking around is for a better reunion in the future,” it said.

The post was soon flooded with angry comments. “Don’t thank them. They all want to go home. It’s true,” read a top comment, which generated more than 4,400 likes in less than three hours.

“The government has set countless barriers for (people who) want to go home to pay a price. They hurt the interest of home returners to achieve the result the government wants. It’s shameful that the government feels proud about this,” another top comment reads.

By the next morning, all critical comments had been removed. The People’s Daily published another Weibo post along similar lines, but it was also inundated with criticism.

“As state media, can you bend down to hear the people’s voice? Is your propaganda work only for pleasing the leaders? We all know we can’t go home for the new year, and are feeling miserable about it, but you keep sensationalizing it and keep talking about it. Who really wants to hear your ‘thank you’?” said a comment, which was later also deleted.

The central government has banned people from or with travel history to high-risk areas from traveling. Those in medium-risk areas are also not allowed to travel unless they obtain special approval from local disease control authorities and present a negative coronavirus test taken within 72 hours. Residents in low-risk areas are encouraged to stay put, but are not banned from traveling.

However, on Weibo, users also complained that local governments in their hometowns had imposed extra requirements on returnees, despite Beijing’s order that no excessive requirements should be added by local authorities.

“I think the policy is too harsh,” said Dan Di, a 21-year-old student from the southern city of Guangzhou, who requested to use a pseudonym to avoid repercussions for criticizing the government.

He has just finished 21 days of quarantine — two weeks at a hotel in the nearby city of Zhuhai and one week at home in Guangzhou — after returning from Hong Kong, where he is studying film at university.

Dan Di considers himself lucky to be able to spend time and money on quarantine and coronavirus tests — but he noted that it would be out for reach or many of the country’s nearly 300 million migrant workers.

“The spring festival is the only chance, and the most important chance for them to go home, to stay with their family,” he said.

Last Friday, the Ministry of Civil Affairs issued a guideline for local officials to enhance “care and service” for the 7 million or so children who won’t see their parents this Lunar New Year.

It instructs parents to use “phone calls and video calls to conduct ‘heart to heart’ talks with their left-behind children.”

After a difficult 2020, many Chinese people had looked forward to seeing their families. However, the outbreak in the north threatens to undo the work Beijing has done so far to contain the virus.

Unsurprisingly, local officials have thrown their support behind the central government’s campaign. They’re not only imposing onerous requirements for tests and isolation — they’re even handing out subsidies and benefits to encourage people to stay put.

The city of Hangzhou in eastern China, for example, is offering a cash handout of 1,000 yuan ($155) for every migrant worker. Other cities are providing shopping coupons, discounted rent and even early access to coronavirus vaccines, according to Chinese media reports.

A worker hangs traditional red lanterns for the upcoming Spring Festival in a usually busy commercial and tourist area on February 3, 2021 in Beijing, China.

Tian Qimeng, who runs an engineering consulting company in the port city of Tianjin in eastern China, said his company is handing out 300 yuan ($46) of cash to non-local employees who choose to stay for the holiday.

“I originally wanted to go home, too, but eventually decided against it as I wanted to make a good example for everyone,” he said.

The 49-year-old didn’t return to his hometown in Shaanxi province last year due to fears over the coronavirus. The last time he didn’t return home for Lunar New Year for two years in a row was more than two decades ago, when he had just graduated from university — he was too busy working as a technician and he spent those holidays on a construction site.

Tian says he “respects and understands” the restrictions imposed on travel.

“They’re all professional (health) experts, if you ask me to made (policies) I can’t come up with better ones. So why not just follow theirs? It’s the best for everyone to do what they’re good at,” he said.

Others are also following official guidance.

Vicky Wang, a internet company employee based in Shanghai, would normally fly back to her parents in northern Shaanxi province a week before the Lunar New Year.

Instead, this year the 25-year-old is stocking up on her favorite snacks — rice crackers and chocolate — as she prepares to hunker down to spend the most important festival of the year alone in her apartment, more than 1,200 kilometers (745 miles) away from her family.

Wang said she understands the government’s suggestions and concerns.

“We have to live our life in a safer way. We have to cut off all the possibilities for the virus to spread. We have to make a little bit of sacrifice for everyone to keep us safe,” she said.