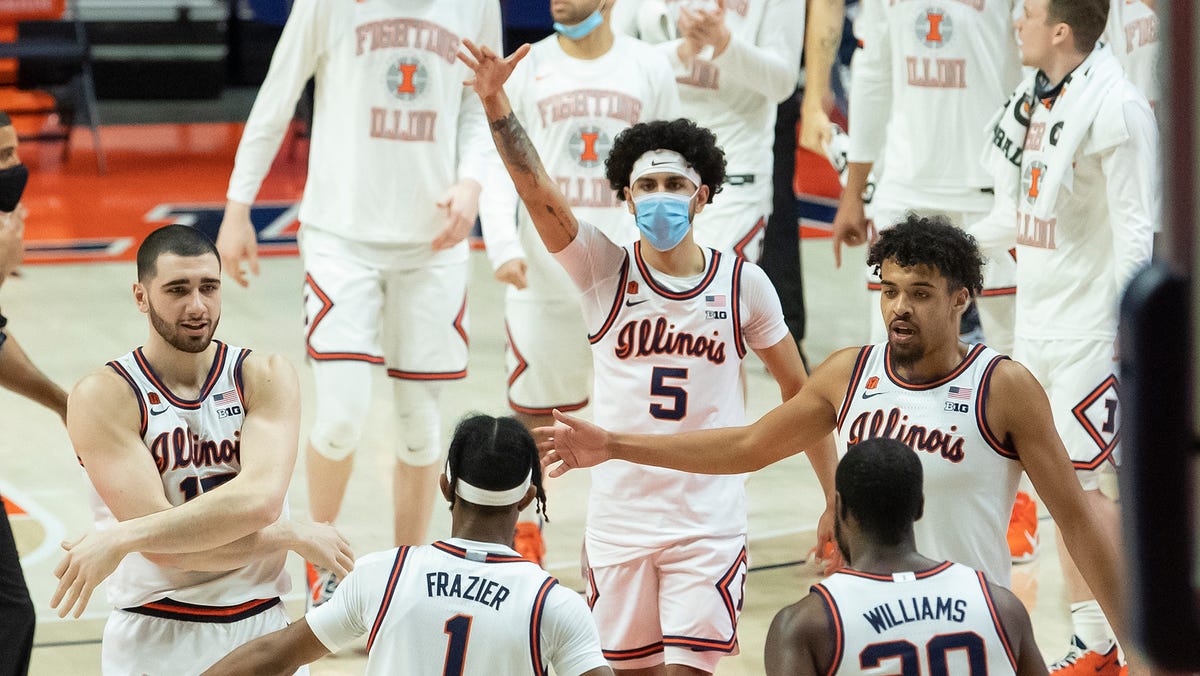 But this season coach Brad Underwood reminds his sixth-ranked team to pack something else besides a change of clothes and a toothbrush.

“We’ve spent a lot of time talking, heading into the postseason and Big Ten Tournament, about taking gaming systems,” Underwood said. “There is nothing worse than sitting in a hotel room.”

Video games are one of the few escapes for players as they pass time awaiting tipoffs on the road  while restricted from interacting much with teammates or enjoying a new city.

Players, coaches and staff are mostly contained to their hotel rooms and arenas during road trips because of COVID-19 protocols to help mitigate exposure to and spread of the virus.

Battling boredom, figuring out logistical puzzles, enforcing mask-wearing and social distancing, rising at dawn for COVID-19 tests — despite a lack of fans at most arenas, road games never have felt like more of a disadvantage than this college basketball season.

“It’s the hardest thing I’ve ever had to deal with,” Minnesota coach Richard Pitino said. “There’s nothing even a little bit normal to what it is we’re doing right now. I’m appreciative to play the games, but the road has been really unique.”

Not that home games aren’t challenging. Not that life doesn’t feel like a never-ending maze of complications for the non-athletes among us in this 11th month of a pandemic.

That’s understood among players and coaches. Navigating a schedule that includes frequent travel can feel like tiptoeing through a minefield.

“It is the most uneasy time of my day,” Underwood said of awaiting daily test results, a strict Big Ten requirement. “Every time my phone rings and I don’t have the results, I’m literally praying it’s not our trainer. You’re not just responsible for yourself. There’s 30 people in our Tier 1 group, and anyone can trigger it.”

More than 175 Division I college basketball games have been postponed or canceled this season. Reports haven’t revealed contact tracing between teams.

Teams already have made numerous adjustments — some at the behest of their conferences and some via creative thinking by their athletic departments. Or simply by learning on the fly.

Traveling parties are significantly smaller; Wisconsin said it has cut back its crew by 20%.

For Minnesota, that means bringing only one student manager on the road, with coaches helping out more with rebounding during shootarounds and other staff members pitching in to unload buses.

Most teams have eliminated night-before-game shootarounds at arenas, and minimizing the length of stay on road trips has become a priority. Instead of busing to Illinois and flying home after the game in Champaign like most seasons, Iowa bused back to Iowa City.

Indiana uses a larger charter plane this season that allows more space between players. Like other teams, Purdue’s radio crew no longer flies with the team. A few trips used to allow big donors to hop aboard, but those have been scrapped too.

Want a snack on the team bus? Sorry, masks must be kept in place.

Different states have different rules and protocols as well, which also can make road life tricky.

In Michigan, Pitino said his team could not gather even in a hotel conference room to study game film.

“We ended up watching a lot of film before we left (Minnesota),” Pitino said. “Ideally, you try to do it closer and closer to the game to keep it fresh. But we didn’t have the opportunity to do that at the hotel. We watched some of it at the arena before the game, which we don’t always do because some of those locker rooms are small. You just have to adapt and adjust.”

Some states allow eating meals in a large room together, while other state guidelines suggest taking grab-and-go boxed lunches to the rooms. Some teams opt to do that no matter the guidelines.

During the nonconference schedule, Illinois traveled with nurses to  administer COVID-19 tests to ensure players weren’t positive before playing. Big Ten schools are staffed with testers for  visiting teams during conference play.

Sometimes that can create other inconveniences. Illinois opted for a morning shootaround at Rutgers.

Traditionally, road trips breed team bonding and chemistry — a time to get away from distractions. Enduring the wait until tipoff can be the most trying part of road games.

“We might watch an NBA game together,” Bezhanishvili said. “Nobody wants to be alone.”

Yet, he noted, this season teammates are the only ones who see each other for the most part — home or away, at games or at home.

Coaches emphasize not breaking their social “circle”  so they don’t risk infecting themselves and the team, possibly derailing postseason goals as well as creating health risks.

“We know it spreads through traveling and going places,” Bezhanishvili said. “So just being very, very careful. Always make sure not only you have a mask on, but also have your teammates accountable. We are playing for something very big and we’re trying not to catch COVID and sit out for however long it might be.”

Illinois sometimes brings its own workout equipment on the road because hotel exercise rooms are often closed.

Underwood, who has become a devoted exerciser during the pandemic, takes long walks on game days rather than watch movies in his room.

The postseason will heighten these long days of feeling trapped in hotels. The excitement of the conference and NCAA tournaments will be muted without the typical throngs of fans, sightseeing and media appearances.

Pitino said he struggles with what to advise his players to do on the road — other than win.

What’s allowed? What’s safest? What decisions get you to the end of the season?

“We’re a lot like the rest of the population,” he said. “We try to be informed but not sure we all know, to be honest.”