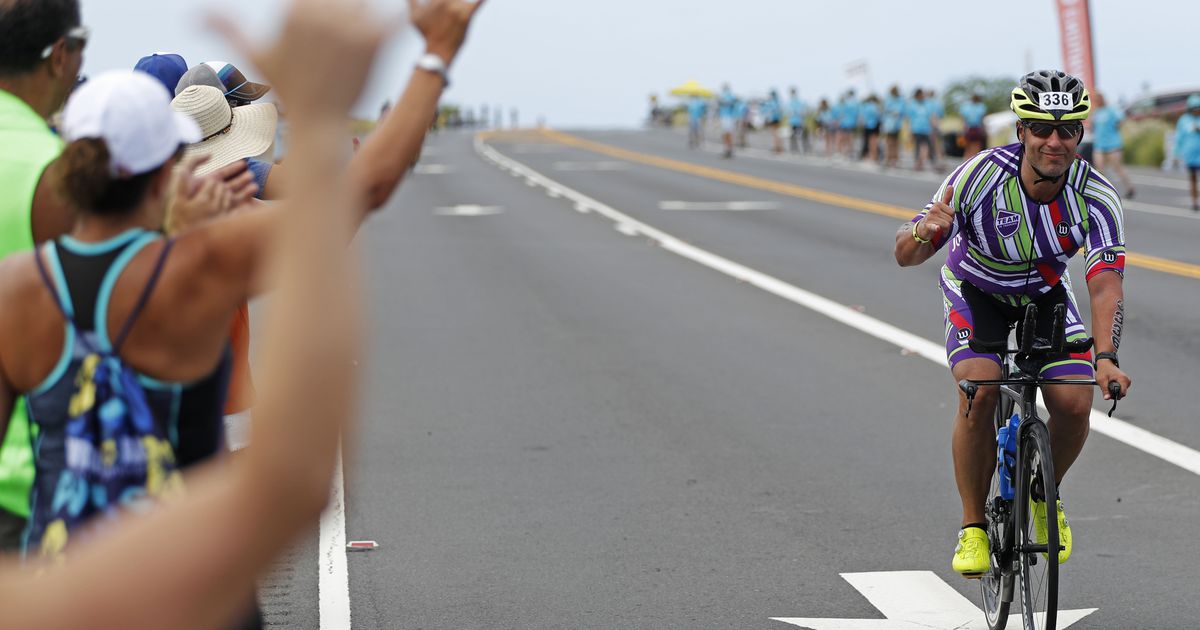 Kevin Lewis has a hot tip for spectators at Saturday’s Ironman World Championship in St. George: You might think that after spending from sunrise to sunset on the course in the sun and wind and sometimes sleet — not to mention generating the energy to swim 2.4 miles, bike 112 miles and run 26.2 miles — the last thing racers in Saturday’s Ironman World Championship in St. George would want to do is party.

And that’s where you’d be wrong, noted Lewis, director of the Greater Zion Convention & Tourism Office.

“Get down there at 11 o’clock at night, watch the end of the race,” he said. “It’s the only sport I know where the last person who crossed the finish line may get more applause than the first.”

This will be the first time Ironman’s marquee event has been held outside of Hawaii in its 44-year history. And the course is unlike any other Ironman, full- or half-distance, that St. George has hosted. So, keeping track of athletes and knowing where and when to watch the action — or how to avoid it — will be new for everyone.

Enter our spectator’s guide. Whether you’re watching from the couch, the computer or in the crowd on-site, these are the key facts you need to know.

FIRST, SOME BASIC FACTS AND HISTORY

This will be the 43rd running of the Ironman World Championship, a race that started with a couple handfuls of people in Oahu, Hawaii, before it was moved in 1980. Kona, which has become synonymous with the race, has been its home ever since — well, until the islands’ stringent COVID-19 policies forced the relocation of this race.

This year’s race will be considerably bigger. The biggest yet, in fact. Because of fewer space constraints and because athletes have been qualifying since 2019, Diana Bertsch, the vice president of world championship events for The Ironman Group, said she expects between 3,000 and 3,500 racers Saturday. The previous biggest was 2,385 entrants in 2018.

Some of those racers got in simply because they signed up for the annual St. George 70.3 before it was converted to a world championship. Most, however, had to earn their spot by doing well in a qualifying race, by racing 12 or more Ironman triathlons or by winning an eBay auction.

Each racer has 17 hours to finish from the time they start. Go beyond that, and they officially do not finish. Each leg also has its own cutoff. It’s 2 hours, 20 minutes for the swim, 10:30:00 for the bike and whatever is left of those 17 hours for the run.

BUT WHO IS GOING TO WIN THIS THING?

Frodeno, who won three of the past five championships, will miss Saturday’s race after partially tearing his Achilles. Men’s favorites, then, include the likes of defending Olympic gold medalist Kristian Blummenfelt of Norway, Lionel Sanders of Canada and former St. George 70.3 champions Alistair Brownlee of Great Britain.

Ryf won four straight from 2015-18 and will be trying to regain her crown after Anne Haug of Germany won in 2019. Haug also returns as a favorite. Germany’s Laura Philipp, the top-ranked athlete in the Pro Triathlete Organization, meanwhile dropped out Monday after testing positive for COVID. Another contender, Lucy Charles-Barclay, withdrew with a stress fracture in her left hip. That could leave the door open for Salt Lake City’s own Skye Moench. Moench, rated No. 8 in the world, will be making her world championship debut but has five St. George races in her repertoire and recently set the American women’s Ironman record.

(Francisco Kjolseth | The Salt Lake Tribune)Triathlete Skye Moench seems pretty well adjusted for a pro Ironman racer (ranked No. 8 in the world) and a CPA, as she trains in Salt Lake City on Thursday, April 28, 2022.

The winners each receive $125,000 for their efforts. Second garners $65,000. But that money will be hard earned on the St. George course that Ryf told a triathlon website she expects “will destroy everyone.” The bike has 7,374 feet of elevation gain and the run adds 1,413 feet of climbing. That makes it only slightly less grueling than the first three full Ironman races held in St. George from 2010-12, before it was shortened to a 70. 3 because it was considered too hard.

Click these links for maps of the swim, bike and run courses.

HOW TO WATCH THE IRONMAN FROM HOME

If the answer is yes, your options are to cue up Facebook or YouTube and tune into the live webcast via the Ironman Now page or channel. The webcast will cover the event from tip to tail. When Ironman debuted this feature in 2018 (previously NBC’s coverage didn’t air until a few weeks after the race), an estimated 20 million viewers tuned in. Organizers expect twice that many this year.

Just interested in the pros? Then tune in via NBC’s Peacock app. Coverage there will start at 6 a.m and continue until the end of the elite competition.

The Tribune will also be in St. George reporting on the action. For that coverage, follow @julie_jag and @trenthead on Twitter or @julie_jag.sltrib and @trent.photo on Instagram.

Another handy app to have on your phone while watching, whether you’re doing so in person or during your kid’s Saturday soccer game, is the Ironman Athlete Tracker. Available for Apple and Android, it does just what it sounds, so you can follow your favorite pro or age-grouper around the course without even picking up your feet (consider checking in on No. 179. That’s Kyle Brown of Kaysville, who will be in a race against the clock to become just the second person with Lou Gehrig’s disease to compete in a world championship).

HOW TO WATCH THE IRONMAN FROM ST. GEORGE

Whether you decide to make the drive on a whim or have been planning it since the world championships announcement last September, prepare to immerse yourself in triathlon if you travel to the St. George area. Also prepare to be detoured, turned back and delayed by the myriad road closures.

Definitely check out this interactive map before you go. Some road closure signs will have QR codes on them directing drivers to alternative routes. However, the Greater Zion tourism office also suggests downloading Waze as one of the ways to help navigate traffic and detours.

A few items of note both for people following the race and those who may just be passing through or in the area for non-Ironman-related sightseeing.

Another word of advice: Watch the weather. It is currently expected to be hot and dry, with a forecast high of close to 90 degrees and humidity peaking at 15%. But, this being St. George, that could change any minute, so come prepared with sunscreen as well as a rain slicker.

And if you can manage it after the early start, make sure to go — or at least tune in — to the finish-line mayhem at midnight as athletes race against the cutoff time. Bertsch, the Ironman Group VP, agrees it’s the best part of the vast and exhausting event.

“It’s pretty spectacular,” she said. “The finish line of an Ironman race, it definitely gets into your soul. There’s a piece of it you take home with you.”