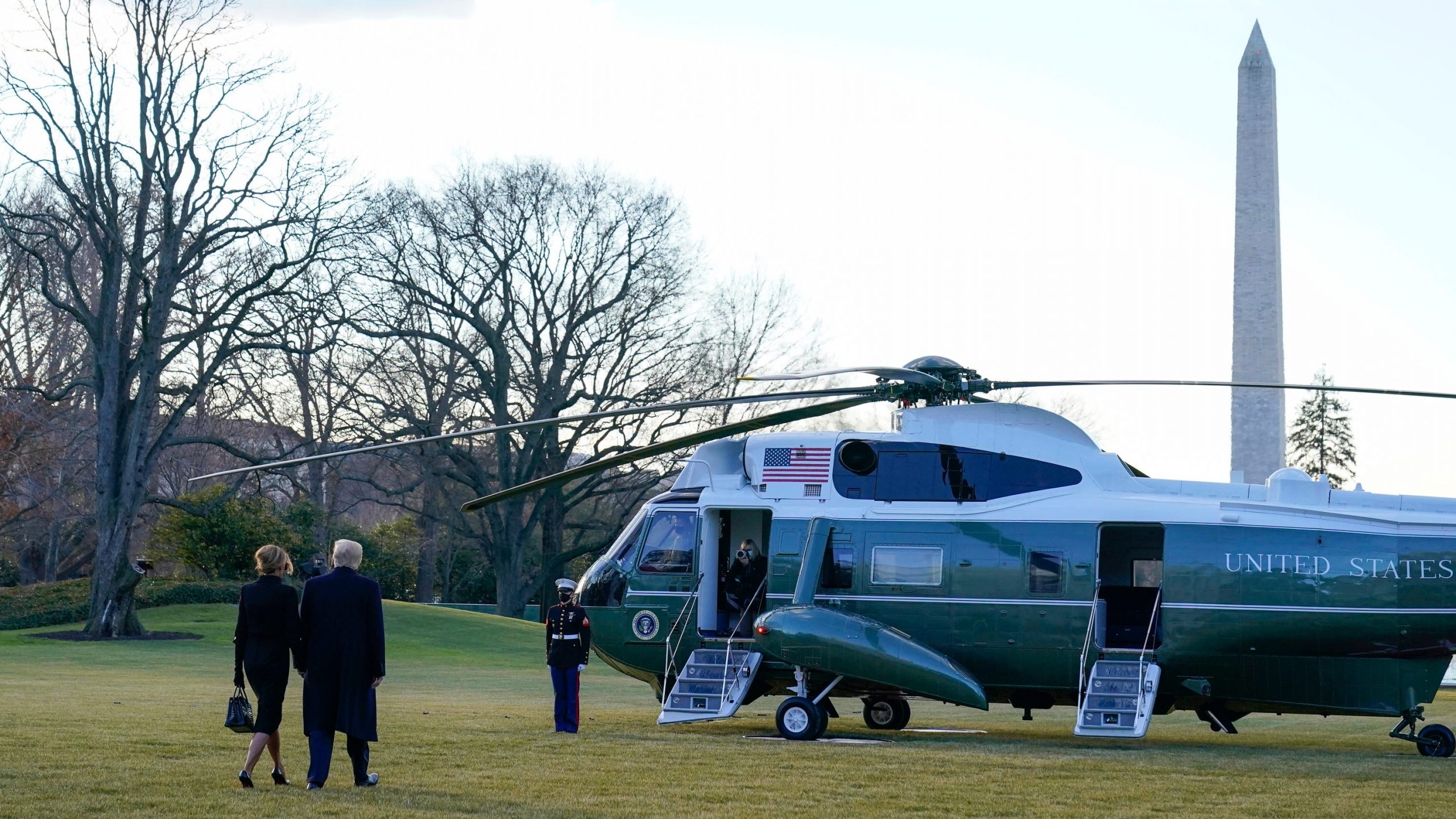 Now that he’s out of office, former President Donald Trump faces a daunting challenge: rehabilitating his brand after it’s been tarnished by a tumultuous presidency that ended with riots at the U.S. Capitol and a second impeachment.

The good news for Trump: More than 74 million Americans voted for him and might be willing to stay at his hotels, golf at his resorts and buy his products, such as shirts, golf accessories and jewelry.

The bad news: Business experts say many companies are expected to keep him at a distance, treating him as bad for business – especially financiers that view the former president as a risky bet, given his history of defaulting on debts and not paying his bills on time.

“There’s a swath of businesses (for which) his brand is just radioactive,” said Erik Gordon, a business and law professor at the University of Michigan.

It’ll be especially hard for Trump to break through if he faces criminal charges over his conduct in office, such as those tied to his alleged role in provoking the Capitol insurrection.

“He is seen as a criminal and, in fact, is one,” said Lisa Gilbert, executive vice president at Public Citizen, a watchdog group that has criticized Trump for profiting off of the presidency.

President Donald Trump and first lady Melania Trump walk to board Marine One on the South Lawn of the White House, Jan. 20, 2021, in Washington. Trump is en route to his Mar-a-Lago Florida Resort. (Photo: Alex Brandon, AP)

About a week after the insurrection, New York City moved to terminate its business contracts with Trump, including deals to operate two ice skating rinks and a carousel in Central Park. Major companies in the business world in which Trump made his name are cutting off campaign funds from lawmakers who supported his challenge to accepting the certified Electoral College votes electing Joe Biden.

And the National Association of Manufacturers called for his potential ouster, while The New York Times reported that Deutsche Bank, Trump’s primary lender for two decades, was no longer interested in doing business with him. Even the New York chapter of the Girl Scouts is reportedly aiming to exit a long-term lease at the Trump Building in Manhattan’s Financial District.

For Trump to succeed financially, he may have to carve a new path for himself because a significant portion of his previous business strategy – real estate development, casinos and golf resorts – but might a dead end, experts said.

There are already signs that some of his partners are done doing business with him. The PGA of American recently announced it was pulling the 2022 PGA Championship from his golf course in New Jersey.

What’s more, the type of elite, wealthy consumers who have historically been able to afford to indulge in Trump’s luxurious properties – such as the Trump International Hotel in Washington, D.C., or the Trump National Doral golf resort in Miami – have increasingly come to view his brand as distasteful.

“I think amongst the traditional Trump target audience or demographic the brand is tarnished for them,” said Peter Jaworski, a Georgetown University professor who teaches business ethics and ethical leadership. “In order to be successful, I think he needs to shift gears toward red states – the people who continue to admire Donald Trump almost to a fault.”

That could prove easier said than done.

Recent efforts by his company, the Trump Organization, to launch a brand of affordable hotels geared toward budget travelers in middle America fell apart. The company blamed political opposition for the plan’s collapse.

The Trump Organization and the White House, while Trump still occupied the Oval Office, did not respond to requests seeking comment.

Trump, however, has signaled he plans to remain firmly in the public eye.

“We’ll be back in some form,” he said Wednesday morning in his going-away speech.

Will anyone lend to Trump?

Part of the trouble for Trump is that financiers may not be willing to extend the type of loans that he would need to invest in a major new enterprise.

And that’s particularly problematic because he could face a cash crunch if he doesn’t quickly reinvent himself, experts said. He owes $300 million in loans over the next several years, according to a New York Times investigation.

But his debts might not be as much of a hurdle as they first appear, said Charles Elson, a professor of finance at the University of Delaware.

In other words, Trump’s creditors may have an incentive to help him work out a payment plan rather than tip him into bankruptcy, a legal process he has used several times to help escape debts and kick-start a comeback. If Trump or his companies file for bankruptcy, their creditors would almost certainly not receive what they’re owed in full.

Still, for lenders to extend financing to him, they may want to see proof of strong cash flow at his current operations. And the reality is that the types of businesses he operates – namely destinations that rely heavily on travel spending – have suffered during the COVID-19 pandemic. To be sure, if the economy comes roaring back as vaccines take effect, travel spending could quickly rebound – but will Trump’s properties reap the benefits?

Event planners, for one, are likely to stay away even after the pandemic eases, Gordon said.

This is why the consensus among business analysts is that Trump’s best option is to capitalize on his following by launching a TV or streaming video enterprise of some type. Before his presidency, Trump was the long-running star of the NBC reality show, “The Apprentice.”

“He certainly has appeal to a large segment of the population, like it or not,” Elson said. “He’ll find another vehicle.”

Having been banned in recent weeks from Twitter and suspended from Facebook, Trump has lost his principal way of communicating with the public, which could limit his ability to entice viewers or listeners.

“But we expect him to find ways to be on TV quickly,” Gilbert said. “That’s the most obvious pathway for him to take from here.”

Another possibility is conservative radio, which was one of the first media to become highly politicized. Will it be enough to satisfy his desire to remain in the spotlight? At least 15 million people listen to one of the top 15 talk radio shows on a weekly basis, the “overwhelming” share of which are conservative, according to the Cato Institute.

“Trump could start with a very large audience. So I think that’s a possibility,” Gordon said. “And I think that will be appealing to him because he has stuff to say.”

As most ex-presidents have done, he could hit the speaking circuit or write books. Speaking fees – if he finds organizations willing to pay – and book deals could be worth millions or tens of millions a year. Trump has already proven himself as a best-selling author, including his first book, “The Art of the Deal.” But books and speaking fees may not be enough to supplant the income he’s historically enjoyed from his business ventures.

“The Trump brand was enormous before he came to office,” Jaworski said. “So for him, going on the speaking circuit would be, in a way, a step down.”

Former President Barack Obama and first lady Michelle Obama received a book deal worth some $65 million after leaving office, according to the Financial Times, while former presidents can command speaking fees on the order of hundreds of thousands of dollars.

But his opportunities to give speeches or do business deals could be limited by the fact that many companies will need to be careful about associating themselves with Trump if such a relationship could anger their workers, said Jaworski, the Georgetown business ethics professor.

Even brands associated with Trump have taken a hit. Trump loyalist and MyPillow CEO Mike Lindell said this week that Kohl’s and Bed Bath & Beyond had decided to stop selling his brand.

“A lot of the branding of companies is about attracting certain kinds of people to come work for you,” Jaworski said. There’s also “a rise in young people being socially conscious, socially aware and being really attuned to the kind of brands they’re purchasing and dealing with.”