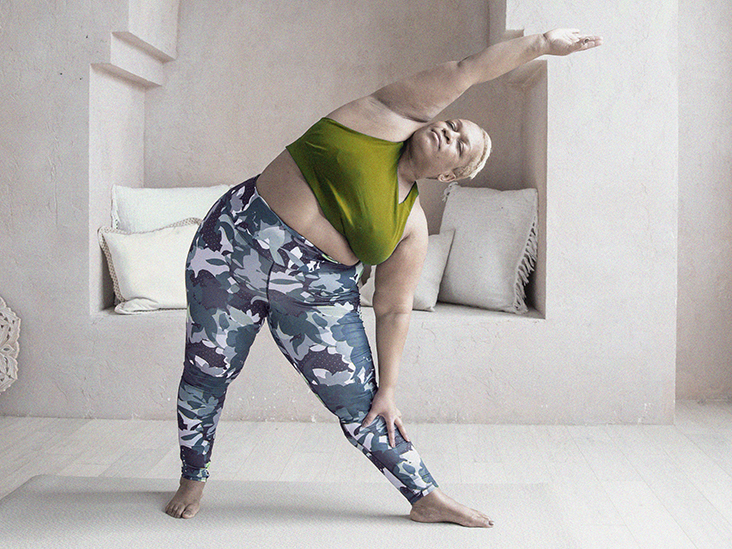 For anyone who has had to spend more time at home as a result of the coronavirus pandemic, news that simple stretching exercises can help reduce blood pressure may come as a pleasant surprise.

“When you’re relaxing in the evening, instead of just sitting on the couch, you can get down on the floor and stretch while you’re watching TV,” says Dr. Phil Chilibeck, Ph.D., professor of kinesiology at the University of Saskatchewan in Saskatoon, Canada, and co-author of the new study.

However, walking was associated with more significant reductions in the participants’ waistlines.

With this in mind, Dr. Chilibeck emphasizes that people who already walk to reduce their high blood pressure should continue to do so. However, he recommends that they consider incorporating stretching sessions into their daily routine.

“I don’t want people to come away from our research thinking they shouldn’t be doing some form of aerobic activity,” he says. “Things like walking, biking, or cross-country skiing all have a positive effect on body fat, cholesterol levels, and blood sugar.”

The study appears in the Journal of Physical Activity and Health.

The Centers for Disease Control and Prevention (CDC) report that 45% of adults — equating to 108 million people — in the United States have hypertension. They also note that in 2018, hypertension was a primary or contributing cause of nearly half a million deaths.

According to the National Heart, Lung, and Blood Institute, undiagnosed or uncontrolled hypertension can lead to cardiovascular disease, chronic kidney disease, eye damage, and vascular dementia.

Doctors usually recommend aerobic exercise to reduce blood pressure. However, previous research has suggested that stretching could lower blood pressure by reducing the stiffness of arteries and improving blood flow.

To gauge the extent of any benefit, researchers at the University of Saskatchewan conducted one of the first studies to compare the effects of stretching and walking on blood pressure.

They randomly assigned 40 males and females to 30 minutes of either stretching exercises or brisk walking. The participants did their allocated exercise on 5 days of the week for a total of 8 weeks.

The stretching program comprised 21 stretching exercises, and the participants performed each stretch twice, holding it for 30 seconds, with 15 seconds of rest between stretches.

The researchers asked the participants in the walking program to monitor their pulse and increase their walking pace if it fell short of 50–65% of the maximal heart rate for their age.

The researchers measured all of the participants’ blood pressure at the start and end of the 8-week exercise program, using three different methods:

In total, the team took 12 different measures of blood pressure for each participant. Compared with brisk walking, stretching was associated with larger reductions in blood pressure across five of the 12 measurements.

The remaining seven measurements revealed no difference between walking and stretching.

Chilibeck notes that stretching may have several advantages, including:

“Everyone thinks that stretching is just about stretching your muscles,” he explains. “But when you stretch your muscles, you’re also stretching all the blood vessels that feed into the muscle, including all the arteries. If you reduce the stiffness in your arteries, there’s less resistance to blood flow.”

The authors note that research suggests that yoga and Pilates, which involve a lot of stretching, also reduce blood pressure.

However, they point out that these practices involve other types of muscle contraction. In addition, yoga sometimes incorporates breath control and meditation, which researchers have shown to reduce blood pressure in their own right.

In the future, the researchers would like to conduct a larger study. In addition, they could investigate the possible physiological mechanisms behind stretching’s effect on blood pressure, such as:

For now, people with hypertension may wish to introduce stretching to their daily routine.