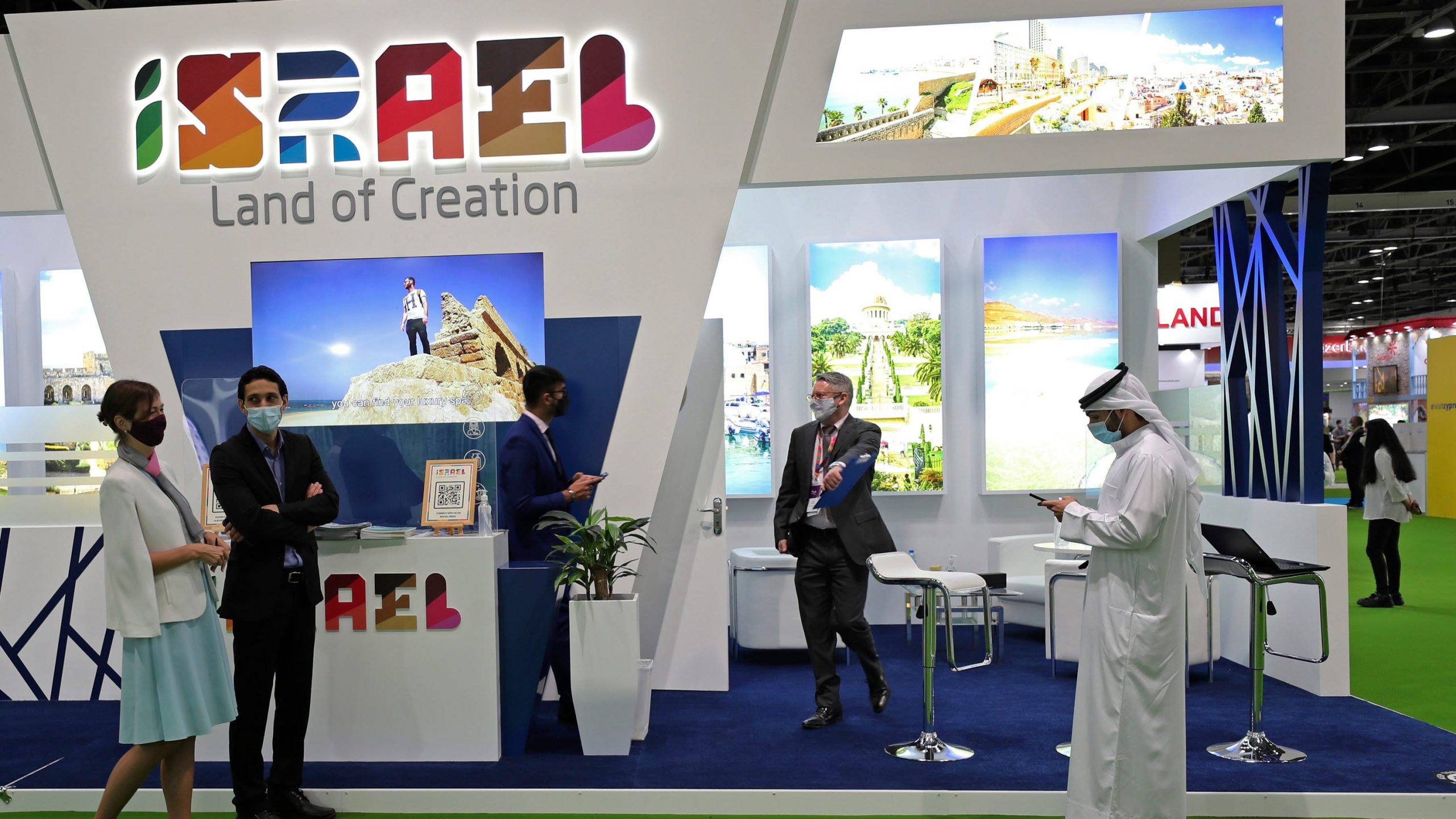 Fighting between Israel and Palestinians in Gaza escalated on Wednesday, Israel launched dozens of airstrikes in a matter of minutes just after dawn, while Palestinians continued a barrage of rocket fire toward Israel. (May 12)

DUBAI, United Arab Emirates — As violence flares within Israel and on a day in which Israeli airstrikes on Gaza City killed at least 42 people, it was business as usual for a senior Israeli tourism official in Dubai as she promoted the country as a must-see destination for Muslim visitors.

It might seem an odd proposition at an odd time given that major airlines have suspended flights to Israel amid the flare-up in violence and while the spread of coronavirus remains a threat.

But at Dubai’s Arabian Travel Market on Sunday, billed as the first travel and tourism event to happen in person since the global coronavirus outbreak, a small Israeli booth — tucked behind Slovenia’s — marketed the country as the “Land of Creation.” Promotional videos advertised Israel’s vegan culinary scene, its beaches and urged: “Book Your Trip Now” to Tel Aviv.

Israel, Gaza and the US: Biden has yet to reverse many of Trump’s pro-Israel policies he labeled ‘destructive’

And the devastating airstrikes on Gaza leading the world’s television news?

The presence of Israel at the travel and tourism event in Dubai highlights the United Arab Emirates’ business-first approach and demonstrates how rapidly ties with Israel have developed since the UAE and Israel signed an accord to formalize ties in September. It also signals how even the most brutal conflicts between Israel and the Palestinians are no longer viewed by some Gulf Arab leaders through a prism of Muslim or Arab solidarity, but as part of a wider calculation in a region gripped by multiple threats.

Israeli exhibitors receive visitors at their stand on the opening day of the Arabian Travel Market exhibition, in Dubai, United Arab Emirates, May 16, 2021. As violence flares within Israel, it was business as usual for a senior Israeli tourism official in Dubai as she promoted the country as a must-see destination for Muslim visitors. (Photo: Kamran Jebreili, AP)

Israel’s tourism minister was scheduled to attend a panel at the conference on Gulf-Israeli tourism, but the panel was quietly renamed, and her visit to Dubai did not transpire. Israeli tourism officials say the minister’s visit was never approved by the prime minister and the cancellation had nothing to do with the current fighting.

The first plane of Israeli tourists to the UAE landed in November. Since then, the UAE has welcomed tens of thousands of Israelis to its sandy beaches and marbled malls, with most flocking to Dubai.

Kobiakov said the hope is that Emirati citizens and foreign residents of the UAE will visit Israel in return and help its tourism sector rebound when the country is open again to tourists.

“We came here to show Israel as a new destination for the UAE and Gulf countries, as a very colorful, exciting destination that is open,” Kobiakov said.

In all her discussions with tour operators, airlines and others in Dubai on Sunday, the focus was on tourism and not politics, she said. There was no discussion of the current flare-up in violence in Israel and the Palestinian territories.

A plan to open visa-free travel between the two countries was delayed due to Israeli quarantine rules. The UAE and Israel, which have had some of the world’s most successful vaccination drives against the coronavirus, are on track to sign the visa-exemption agreement July 1, Kobiakov said.

The current round of violence could impact Israel’s plans to lure back tourists, particularly its effort to appeal to Emirati and Bahraini citizens and not just potential investors or officials from these countries. Violence around the Al-Aqsa mosque in east Jerusalem drew rare rebuke of Israel by both countries, which signed accords recognizing Israel last year.

At least 188 Palestinians have been killed in Gaza, including 55 children and 33 women, with 1,230 people wounded since long-simmering tensions erupted on Monday. Eight people in Israel have been killed, including a 5-year-old boy and a soldier. Violence has also roiled across Israeli cities between Jews and the country’s Palestinian Arab citizens, as well as in the occupied West Bank.

In its airstrikes, Israel has leveled a number of Gaza City’s tallest office and residential buildings, alleging they contain Hamas military infrastructure. Among them was the building housing The Associated Press office and those of other media outlets.

The UAE’s foreign minister stopped short of directly criticizing Israel in the most recent statement issued Friday. Sheikh Abdullah bin Zayed instead called “on all parties to take immediate steps to commit to a ceasefire, initiate a political dialogue, and exercise maximum restraint.”

On the sprawling premises of Dubai’s tourism event, Kobiakov’s schedule of back-to-back meetings affirmed the long-view approach to bilateral ties the UAE and Israel have taken.

“People don’t feel safe to travel now to Israel. It’s understandable. But this escalation, it will finish one day,” she said. “We know that all the conflicts are coming and they are going. Tourism is staying forever,” she added.