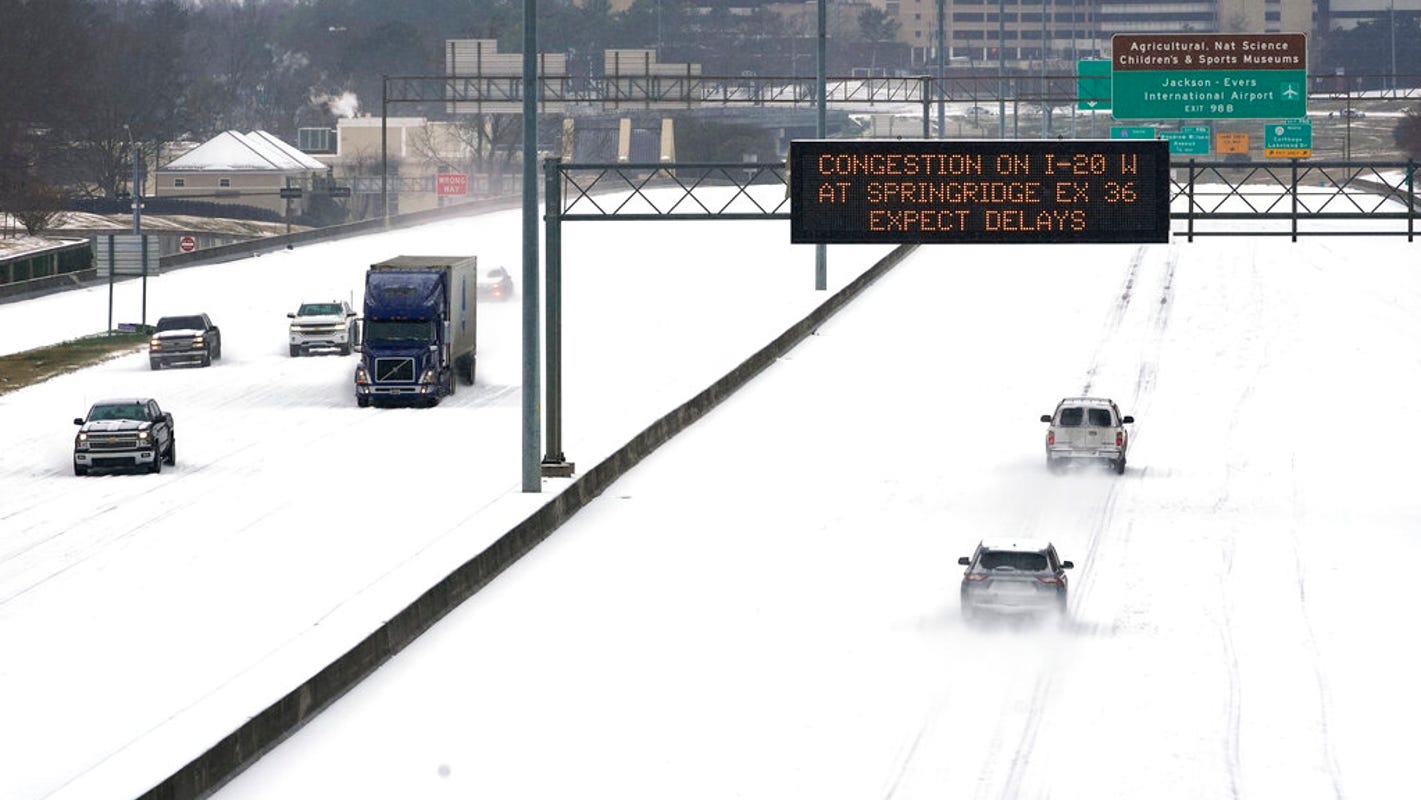 A snowplow clears a road in Mississippi as a storm system brings ice, snow and frigid temperatures to the state.

Editor’s note: The Clarion Ledger is making this severe weather story free for everyone to read as a public service. We can’t continue to do this important work without your support. If you don’t already, please subscribe today at https://cm.clarionledger.com/specialoffer.

The city of Jackson has issued a boil water advisory until further notice for roughly 43,000 customers after freezing temperatures have affected water production.

According to a news release issued Tuesday afternoon, the record cold temperatures that have gripped the region have affected equipment at the city’s water treatment plants and they can no longer maintain adequate water pressure. Some residents may experience low to no pressure when using faucets or appliances until the issue is resolved.

The city advises that all water should be brought to a rolling boil for one minute before use for the following:

City officials said residents will be notified when the boil advisory has been lifted.

Hazardous travel conditions have been an issue since the winter storm moved in on Sunday and according to the Mississippi Department of Transportation, conditions won’t improve much for days to come.

“We are treating right now, as much as we can, all of our interstates,” Jas N. Smith, MDOT deputy director of Public Affairs. “We’re using salt and snow plows to clear the roads.”

But even with salt, snow plows and crews working 12-hour shifts, the department can’t get ahead of what it’s being dealt.

“It’s a pretty unprecedented event. We have Mother Nature working against us. We’ll be starting all over again.”

The hardest-hit counties lie in a northeasterly line from Pike County to Kemper County. Counties in the northwestern part of the state have experienced significant numbers of outages as well.

Roads and bridges across most of Mississippi are covered in ice and snow, creating a dangerous situation for motorists and leaving some roads impassible.

According to the Mississippi Highway Patrol, state troopers have worked 695 weather-related calls between Sunday and 6 a.m. Tuesday morning.

Due to continuing hazardous conditions, the Jackson Municipal Airport authority has extended the suspension of service at Jackson-Medgar Wiley Evers Airport and Hawkins Field.

Both airports are expected to reopen at 11 p.m. Wednesday, but if conditions worsen the closure may be extended.

The Mississippi Department of Transportation is reporting Tuesday morning that all west-bound lanes of I-20 are closed in Vicksburg due to multiple disabled vehicles. Motorists are advised to find an alternate route.

All lanes of I-20 are closed in both directions from the Lake/Norris Road exit 96 to the Newton/Philadelphia Exit 109 due to hazardous conditions.

Also, travel on US 80 between Mississippi 489 and Mississippi 15 in Scott County is delayed due to multiple disabled vehicles.

Thunder, snow, sleet and lightning: Even meteorologists admit this Mississippi storm was one for the ages

All operations at post offices in those areas are also suspended Tuesday.

For updates on changes in operations, customers are advised to check https://about.usps.com/newsroom/service-alerts/.

More winter weather on the way

According to the National Weather Service in Jackson, more winter weather is on the way.

Residents across Mississippi are dealing with below 20 and some singe-digit temperatures with subzero wind chills Tuesday morning as a late winter storm continues to wreak havoc on the region.

The National Weather Service in Jackson has issued a wind chill advisory for the Jackson metro area until 9 a.m. Temperatures dipped into the single digits in North Mississippi during the overnight hours and wind chill factors are anticipated to go below -5 degrees at times Tuesday morning.

According to the National Weather Service, hypothermia is likely with prolonged exposure and frostbite can affect people exposed to those temperatures within 30 minutes.

A hard freeze warning is also in effect for the region until noon Wednesday.

COLD: Temperatures will not warm up above freezing for most today. Cold again tonight.

WINTRY WEATHER: Another round of wintry weather is expected Wednesday through Thursday, especially across the Delta where additional ice and sleet accumulations are likely. pic.twitter.com/SkxAlGHT5z

Due to continued hazardous conditions, the Mississippi Department of Transportation is asking people to stay off the roads.

Ice on roads and bridges continues to be a major problem for most of Mississippi resulting in accidents, disabled vehicles and road closures.

Downed power lines are also creating travel problems in some areas as well.

We urge you not to drive if you don’t have to. Sliding off into a ditch could easily become a life-safety issue if you’re left in the extreme cold temperatures for too long.

All Mississippi State Department of Health drive-thru vaccination sites will be closed Tuesday with the exception of the Coast Coliseum in Harrison County, the agency said Monday.

Monday’s appointments had also been canceled because of the winter weather.

The appointments have been automatically rescheduled for the same time on an alternate day.

For details, visit the Mississippi Department of Health website.

Due to hazardous weather conditions, all MSDH drive-through vaccination sites will be closed Tuesday with the exception of the Coast Coliseum site in Harrison County. Canceled appointments at all other sites will automatically be rescheduled for the same time on an alternate day. pic.twitter.com/tJSGvw7IXX

Public Service Commissioner Brandon Presley said Sunday that residents who both have a power outage and a life-threatening condition or have an emergency need for power can call or text (601) 383-3287 for assistance.

Temperatures were to fall to dangerous lows Monday night into Tuesday morning with much of the state expected to experience single-digit lows. According to the Mississippi Emergency Management Agency on Monday, these shelters are open or will be open for those in need of protection from the cold.

Jackson Public Works Director Charles Williams has said the city is preparing for an expected high volume of water main breaks. He encouraged the public to report any water main breaks or low water pressure by calling 311.