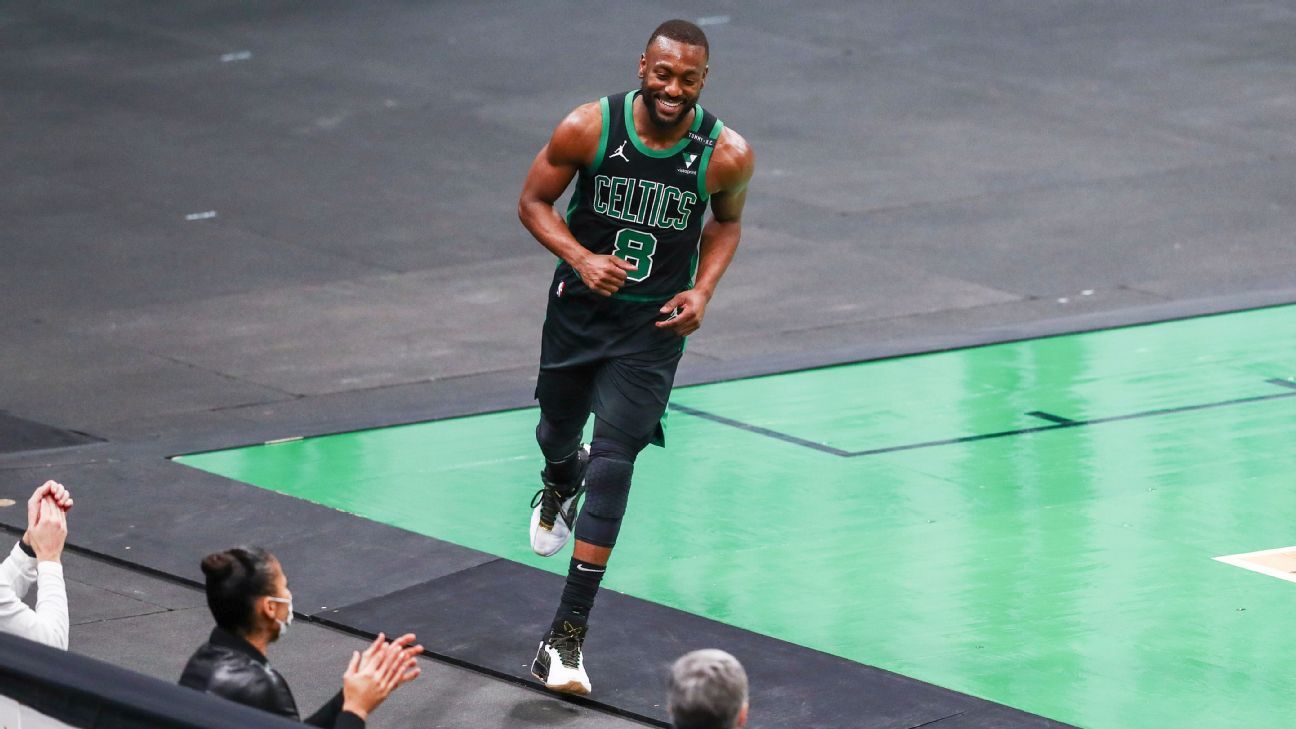 BOSTON — Little went right for the Celtics in a 105-75 shellacking at the hands of the New York Knicks on Sunday afternoon at TD Garden.

But the Celtics will happily take the ugly outcome if star point guard Kemba Walker continues to feel as good moving forward as he did after his season debut.

“I felt really comfortable making my moves,” Walker said after finishing with nine points, three rebounds, four assists and three steals in 20 minutes. “[I was] pain-free, which I haven’t been for a very long time.

“It feels weird actually not having pain, if that makes sense. It’s kind of a weird feeling. I’ve been hurt for a very long time, so I was really just happy to get out there, just super excited. It was fun. I can’t wait to get back out there.”

Sunday’s game was Walker’s first since the Eastern Conference finals, when the Celtics fell to the Miami Heat in six games. After Boston’s season ended, Walker got an injection in his troublesome left knee and then went on a 12-week strengthening program to try to build it back up after it had bothered him for the past year.

It was only one game — and a rough one at that, as a clearly rusty Walker shot 3-for-13 from the field and went 1-for-8 from 3-point range. But Walker sounded relieved to be able to play without pain for the first time in a long time, saying he felt “joy” at being able to make moves on the court without pain flaring up in his knee.

“When did I feel fully healthy? I don’t know. … I can’t tell you exactly when,” Walker said. “But it’s just like … as the days go by, mentally, it’s just like every day, every day I’m not thinking about it.

“At one point it was like, mentally that’s all I could think about. Like, on the court, in the bubble, that’s all I could think about was my knee. Every step I took, every move I made, it was something, even when I wasn’t playing. Now I’m out there and I’m trying to do a step-back and the first thing out of my mind is like, ‘Damn, this is probably going to hurt.’ Not even worried about making or missing the shot; it’s just about the pain.

“Today when I’m out there, I’m making the moves I normally make and I don’t feel anything and it’s joy. I’m excited. I put in a lot of work. I really attacked my rehab to get where I’m at, and I want to continue to build off this and just try to stay healthy. That’s the most important thing.”

On a day when nothing else went right for the Celtics, who felt the absence of All-Star Jayson Tatum, who didn’t play because of the NBA’s health and safety protocols, Walker looked spry moving around the court.

“It feels weird actually not having pain, if that makes sense. It’s kind of a weird feeling. I’ve been hurt for a very long time, so I was really just happy to get out there, just super excited. It was fun. I can’t wait to get back out there.”

Kemba Walker, on his season debut

From the opening tip he showed good burst, getting into the lane to make a couple of nifty passes to Tristan Thompson and Grant Williams for layups and cutting into a passing lane and charging upcourt with the ball before being called for a travel on a play in which he could have easily been given a foul call instead.

While the Celtics would have preferred Walker and his teammates knock down a few more shots, coach Brad Stevens was encouraged by what he saw from his star guard.

“I thought, as anybody would have predicted with very limited practice time, there were parts that he probably felt a little rusty,” Stevens said. “But as far as physically moving up and down the floor, all those type of things, I thought he looked good.”

Walker struggled with his knee before last season was stopped in March because of the coronavirus pandemic and then was limited by it when Boston returned to play in the NBA’s bubble at the Walt Disney World Resort in Lake Buena Vista, Florida, over the summer.

After the strengthening program, Walker has slowly been ramping up his workload — a process that hit a snag because of Boston’s recent issues with COVID-19, as Robert Williams III and Tatum tested positive and several other players were in contact tracing. As a result, Boston had three games postponed last week before returning to the court for a win over the Orlando Magic on Friday.

“Very little,” Stevens said when asked how much Walker has practiced with his teammates. “But he’s done a lot with, prior to our mini shutdown last week, he got in a lot with coaches. [Then he] increased his work each day throughout that period. … Not probably your typical practice, but they feel really good about where he is, and he feels really good about where he is.”

Boston entered Sunday with the best record in the Eastern Conference at 8-3 but couldn’t get anything going against the Knicks, who snapped a five-game losing streak. The Celtics felt the loss of Tatum, who is averaging 26.9 points per game, on a day when they couldn’t knock down an open 3-pointer.

While Jaylen Brown continued his hot start, scoring 25 points, no other Celtic scored more than 10 points and the rest of the team combined to shoot 4-for-37 from 3.

Ultimately, though, the Celtics know that they need Walker, Tatum and Brown all playing at a high level to be the contender they hope to be. That is why they’ll still view Sunday’s game as a positive.

Now, Boston will wait to see how Walker’s knee responds to him getting back on the court again, a process that will likely include a minutes limit for some time.

“I don’t,” Walker said, when asked when his minutes limit will end. “I’m going to be honest, I hope it’s over next game. But I’m sure it’s going to be for a few games.

“I’m just getting back. We just want to see how my knee reacts after these games and stuff like that. It’ll ramp up, though. I’ll get there. It’s no rush. I already took my time coming back, and I’m going to keep taking my time until I’m full go.”