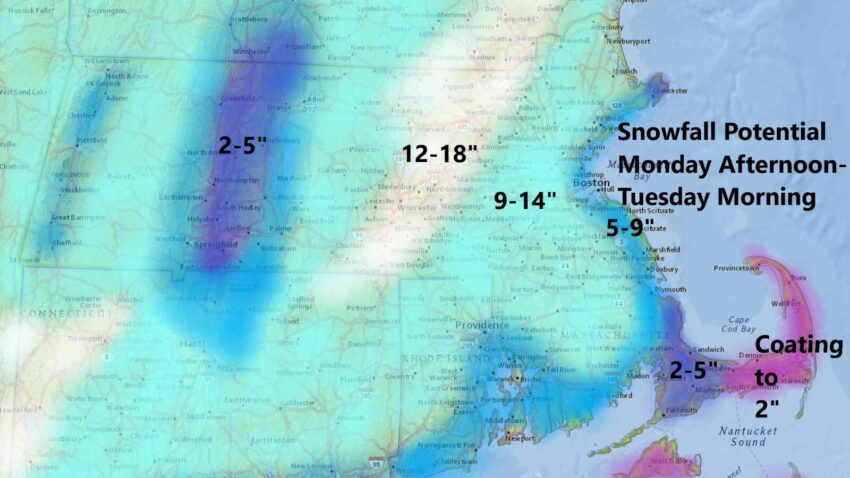 I’ll begin this evening’s update with a little insight into how I’ve been forecasting for this particular storm.

The models over the years have gotten really good and sometimes they do mess up, but I don’t want to be an outlier from them in this particular situation. There’s a lot of strong evidence for some very intense snow tomorrow evening.

I think the bottom line is that a lot of places are going to see around a foot of snow and many areas will go over that. The biggest challenge with the upcoming storm is where the rain and snow line is going to be and how that will affect the ultimate totals.

Every storm has its unique characteristic, and I think with this particular one what we’re going to be looking at is very heavy snow for several hours tomorrow afternoon and tomorrow evening. The snow starts between roughly 11 a.m. well south of Boston and around 1 p.m. in the city.

The snow becomes quite heavy mid-afternoon and this is going to make travel quite difficult, and it will be tough for road crews to keep up for several hours, especially before midnight. One of the models I look at has snowfall rates over 2 inches an hour on either side of 7:00 p.m. Monday. This type of snowfall rate is frankly dangerous and you’re not going to want to be on the roads. Even plow crews will have a tough time keeping up.

I usually don’t show too much raw snowfall prediction stuff because it’s often not great. However, in this case, this model is forecasting some 2″+ snowfall rates tomorrow evening. If this materializes it’s the kind of intensity that makes travel nearly impossible. pic.twitter.com/CBKScuSI8k

The rain-snow line will begin to creep up from Cape Cod during the overnight hours, but so much of the precipitation will fall before it changes to rain that even Boston could see a foot or more of snow. This is going to be a difficult storm to clean up. There will be wind and the snow texture is going to be heavy. For most of Cape Cod and the outer tip of Cape Ann, it’s mainly rain.

I am forecasting a very narrow band of slightly less snow right along the water’s edge. It’s not impossible that the band doesn’t materialize, if enough snow falls before the warm air arrives. Conversely, that band could expand a little bit west if the warm air comes in a bit faster.

If you can clean up slowly during the storm, it will be to your advantage as most areas inside Route 495 will see at least some rain and the snow will become quite heavy by Tuesday morning.

There is likely to be some coastal flooding at the time of high tide Monday night and perhaps again a little bit on Tuesday, but this should not be a major coastal event.

Winds will be strong enough that there could be some scattered power outages, and since the snow is going to be particularly heavy and wet close to the coastline, some tree damage could also result in power issues.

When you get up Tuesday morning, if you do have power, the good news is that the wind will be slackening and precipitation will be fairly light. There is likely to be some additional rain or snow, but I’m not forecasting any accumulation beyond a coating or an inch.

The snowpack will melt somewhat towards the end of the week as temperatures reach towards and then eventually above normal with a few showers of rain.