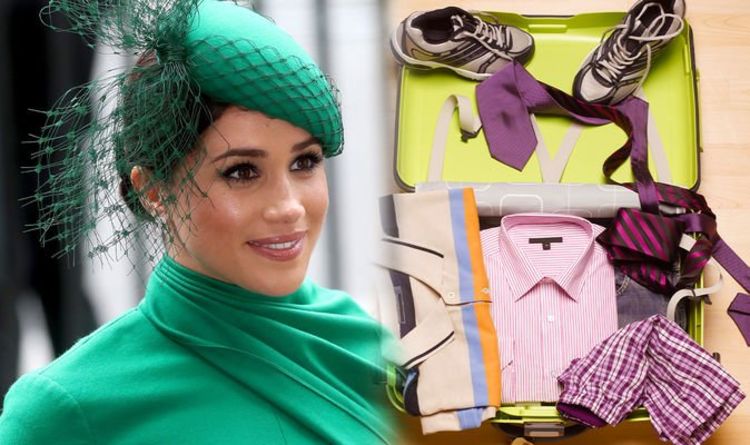 The Royal Family are known for travelling around the globe to perform their royal duties. Some of their royal tours can even last weeks as they make their way across whole continents. So, it’s no surprise that members of the Royal Family have picked up some handy packing tips along their way.

An excerpt from the book which was posted online by the Daily Mail after the book was published reveals the Duchess of Sussex’s handy hack which she used when packing before her first trip to Africa with Prince Harry.

“She has always taken pride in being a great packer – going as far as layering dryer sheets in between her clothes to keep them smelling fresh and no matter her destination always bringing tea-tree oil for bites, cuts, and pimples – and her skills were appreciated by the prince.”

READ MORE: Royal travel: The Queen & family must avoid some food when travelling

“It’s inexpensive, it’s small enough to carry on, and I bring it with me all the time.”

As a famous actress, Meghan was not a stranger to travel before she became a member of the Royal Family.

In fact, Meghan was known to discuss her travel tips on her old blog The Tig.

One of the tips Meghan discussed related to travel sickness on planes – common occurrence among frequent flyers.

Meghan offered up some valuable advice that she received from a friend.

She wrote: “A dear friend of mine once told me that Leonardo DiCaprio gave her an excellent travel tip.”

She added: “I know – I could have written an entire post on this conversation alone.

“Evidently, he said that to avoid getting sick on planes, he puts a little Neosporin on a cotton swab and coats the inside of his nostrils.”

Neosporin is an antibiotic ointment which reduces the risk of infections after eye minor skin injuries and superficial bacterial eye infections.

A spokeswoman for Meghan and Harry has said the couple have not had any involvement in the book Finding Freedom.

Following the book’s publication earlier this month a spokeswoman for the couple said: “The Duke and Duchess of Sussex were not interviewed and did not contribute to Finding Freedom.

“This book is based on the authors’ own experiences as members of the royal press corps and their own independent reporting.”