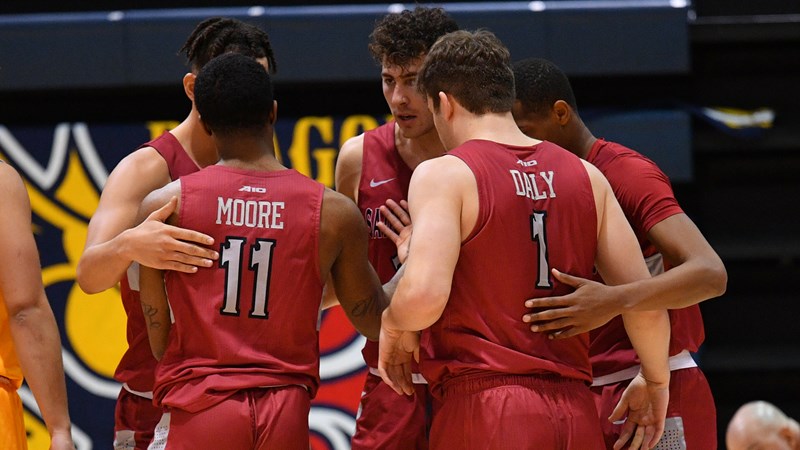 • Saint Joseph’s takes on #7 Villanova on Saturday in the second of three contests over a five-day period for the Hawks.

• Saturday’s contest will be televised nationally on FS1.

• This season marks the first time since December of 2002 that Saint Joseph’s has played three non-conference games over a five day period that were not part of an in-season tournament.

• Saturday is the first of two matchups versus top-10 teams, with the Hawks traveling to #10 Tennessee on Monday.

• The Hawks are coming off an 81-77 loss to Drexel on Thursday in which Saint Joseph’s rallied from down by as many as 16, only to be held off late by the Dragons.

• Sophomore Rahmir Moore, making his first start of the season, added 12 points and four assists against the Dragons.

• Redshirt junior Taylor Funk, who is averaging a career-best 16.3 points per game this year, added 14 points and had a team-high eight rebounds at Drexel.

Saturday marks the 78th meeting between Saint Joseph’s and Villanova. Below are series highlights and notes.

• Pat Carroll set a single-game mark for most three-point attempts, 19, versus Villanova on February 7, 2004.

• Saint Joseph’s head coach Billy Lange, who served as associate head coach at Villanova from 2011-13, is 0-3 all-time versus the Wildcats.

• Lange originally joined Villanova’s staff as an assistant coach and coordinator of basketball operations for three seasons before taking the head job in Navy in 2004.

• The Hawks are 2-13 in games played at Villanova.

Despite having played just three games so far this season, Saint Joseph’s ranks among the national leaders in three-pointers made per game as the Hawks are tied for 38th (9.7), while Ryan Daly is currently tied for 35th in scoring at 20.7 points per game.

Saturday marks the 185th time Saint Joseph’s has faced a nationally ranked opponent. Earlier this season, the Hawks fought but eventually fell to #6 Kansas, 94-72. With the loss, the Hawks moved to 45-139 all-time versus ranked squads. Saint Joseph’s last win over a ranked team came on February 27, 2018, as the Hawks topped #17 Rhode Island, 78-48.

The Hawks travel to #10 Tennessee for a 6 p.m. tip with the Volunteers on Monday, December 21. The game will be televised on the SEC Network.