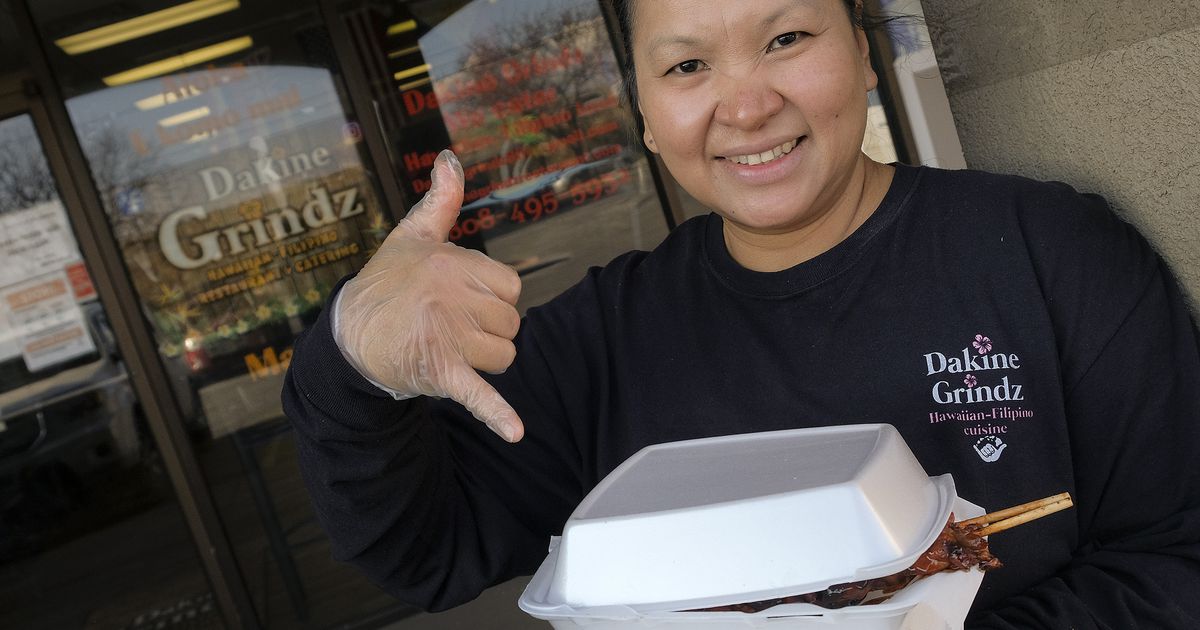 (Leah Hogsten | The Salt Lake Tribune) Dakine Grindz restaurant owner Leilani Bugtong was born in the Philippines, but grew up in Hawaii. She serves both cuisines at her restaurant in Sunset, Jan. 11, 2021.

For more than a decade, Mo’ Bettahs has reigned as king of Hawaiian restaurants in Utah, expanding from its one Bountiful location in 2008 to 18 outlets — and counting — today.

The success of the quick-serve company, founded by brothers Kalani and Kimo Mack, was inspiration to others in the Pacific Islander community and has created a new wave of island-style eateries in the Beehive State.

“We’ve gone from one or two Hawaiian restaurants in Utah to five or six in almost every county on the Wasatch Front,” said Keni Aikau, who launched Hungry Hawaiian in Woods Cross in 2017, about a mile from the original Mo’ Bettahs.

The owners of Mo’ Bettahs sold 51% of their company in 2018, to a restaurant development company that infused the company with cash and allowed it to build 17 new stores from Logan to St. George and one in Idaho.

Dakine Grindz restaurant owner Leilani Bugtong was born in the Philippines and grew up in Hawaii. She serves both cuisines — and some fusion dishes — at her restaurant in Sunset, Jan. 11, 2021.

The rising Hawaiian tide has helped inspire new “mom and pop” places, said Aikau. “People recognize the style and flavors and they come try my food.”

While these Hawaiian-style restaurants vary, depending on the nationality of the owners, they do have several traits in common: a fast-casual concept with a laid-back island interior; a kitschy name that conjures images of oceans and palm trees; and a menu that celebrates the “plate lunch.” This multicultural meal has roots that date back to the 19th century and Hawaii’s fruit and sugar farms.

With mounds of steamed white rice, scoops of macaroni salad — often laden with mayonnaise — and a choice of meat, such as teriyaki beef, fried katsu chicken or kalua pig, the plate lunch is, Aikau said, possibly the most beloved Hawaiian meal in the lower 48.

“Every Hawaiian restaurant on the mainland, regardless of who runs it,” he said, “has it.”

Of course, it’s not what Hawaii’s residents eat on a daily basis, said Susi Felch-Malohifo’ou, an activist with Utah’s Pacific Islander community.

Cooks are more likely to make starchy poi made from taro root; fresh lomi lomi salmon with tomatoes and onions; sushi-like musubi; or lau lau, which is pork wrapped in taro or banana leaves.

“What most people call Hawaiian food,” Felch-Malohifo’ou, explained, “is fusion.”

Hawaiians ate only native taro root until the 1880s. That’s when workers from China, Japan, the Philippines, Korea and Portugal moved to Hawaii to work on the giant pineapple and sugar farms. They brought with them many of their native food traditions.

Each day, this diverse mix of people would carry lunch tins or “bentos,” filled with leftover meat, vegetables, rice, pickles or cooked eggs, into the fields for midday meals.

Over time, the flavors from the various cultures blended, which explains why Japanese rice, American macaroni salad and Hawaiian kalua pig sit side by side on today’s plates.

While the plantations eventually closed, the plate lunch endured, moving to food carts and later stand-alone restaurants, which also expanded the cultural fusion with items like loco moco, the ultimate Hawaiian comfort food. A hamburger patty, smothered with brown gravy and topped with an over-easy egg is served on a bed of white rice.

Is it any wonder the plate lunch has become a beloved meal for Hawaiian tourists? It’s not only filling but also cheap.

Those two reasons may help explain why the fast-casual Hawaiian restaurant concept has flourished in Utah.

The travel factor is definitely another, said Daysha Filipe, co-owner of The Salty Pineapple.

“It reminds people of their vacation,” she said. “It’s the whole island vibe and the fact that islanders are so friendly.”

After operating a food truck for several years, Filipe and business partner Shantel Longfellow opened their brick-and-mortar restaurant in March. The $10,000 they won on the “Big Food Truck Tip” in 2018 helped launch the restaurant that serves traditional plate lunches with a twist, like Japanese katsu chicken sandwiches and tropical French toast.

Filipe said serving Hawaiian food is part of her heritage. Her Pacific Islander grandparents own and operate the Lanikai Grill in South Jordan.

Hawaii’s direct connection to The Church of Jesus Christ of Latter-day Saints adds to the food’s popularity in Utah.

Many of the initial Utah immigrants from the Pacific were Latter-day Saint converts who took advantage of educational and economic opportunities in the state and encouraged family and friends to do the same.

Church missions in the Pacific have created a connection between the islands and Utah, so has attendance at Brigham Young University-Hawaii and the Polynesian Cultural Center, both owned by the Utah-based faith.
According to the most recent U.S. Census numbers, Hawaiians and Pacific Islanders make up 1.1% of the state’s population — the third largest pocket behind Hawaii and Alaska.
It was that Mormon connection that Kalani and Kimo Mack say helped launch Mo’ Bettahs. In a 2018 interview with The New York Times, the brothers said their first restaurant in Bountiful struggled until they reached out on Facebook to groups for Latter-day Saints who served two-year missions in Hawaii, Tonga and other Pacific countries.

“Mo’ Bettahs was suddenly mobbed with former missionaries eager to give their families and friends a taste of the place where they had spent their most formative years,” the story states. “Mormons, the Macks quickly realized, were their greatest marketing tool.”

One subset of the Latter-day Saint population that has not particularly taken to the Hawaiian restaurant trend, the Macks said in the article, were people of Polynesian descent.

It’s the same for this next generation of Hawaiian restaurants, as well.

“The majority of our customers are white,” said Leilani Bugtong, who owns Dakine Grindz in Sunset. “They’re looking for a Hawaiian fix.”

Five years ago, during a trip to Utah to visit a friend, Bugtong and her husband decided to put an offer on a house, never expecting it to be accepted. But it was. The next year, the family moved from their home in Maui to Utah, where they soon longed for the type of Hawaiian food they had enjoyed.

“We tried some of the restaurants here,” said Bugtong, who was born in the Philippines and raised in Hawaii. “But they lacked the island flavor we were used to.”

That’s when Bugtong quit her job with a car rental company and launched a food truck. She opened the brick-and-mortar restaurant in 2018.

Roughly translated, Dakine Grindz means “variety of good food,” she said, with a nod to the Hawaiian and Philippine foods that grace the menu. There are a few items where Bugtong has found a way to fuse the two cultures, like putting marinated huli huli chicken on a stick to resemble Philippine street food.

While hardly traditional, Bugtong said, “we really try to bring the spirit of the island and treat the customer as family.”

Utahns can definitely say “mahalo” — or thank you — to that.