New Brunswick has re-introduced restrictions on unnecessary travel into the province in a bid to slow the spread of COVID-19 and to keep the highly contagious U.K. and African strains out.

The changes come as 18 new cases were confirmed, bringing the total active cases in the province to 143 — a record-high since the pandemic began in March.

An outbreak has also been declared at a fourth long-term care home, with one positive case at Foyer Ste-Élizabeth, a 50-bed nursing home in Baker-Brook, in the Edmundston region, Zone 4, said Dr. Jennifer Russell.

“While the virus isn’t very mobile, people are,” said Russell.

The constant movement of people between cities, provinces and countries has enabled COVID-19 to spread to every corner of the globe, she said.

“If we could all stop moving, like the global game of freeze tag, the virus would start moving too. Of course, that won’t happen because our society and our economy depend on the movement of people and goods.

“But we can reduce the opportunity for the virus to spread by moving less and avoiding unnecessary travel within our province.”

Canadian residents who own property in New Brunswick or who have family members in the province are not permitted to enter the province, said Russell.

“We have returned to the pre-June rule,” she said during the COVID-19 briefing in Fredericton, along with Education Minister Dominic Cardy.

Travel into the province for work, medical appointments, compassionate reasons and child custody will still be permitted, she said.

New Brunswick residents returning to the province after unnecessary travel must self-isolate for 14 days, but those returning from working outside the province can be released from that requirement provided they test negative on a Day 7 test and an additional test between days 10 and 12.

Those in isolation because of work-related travel must wear a mask at all times, indoors and outdoors and maintain a strict one-household bubble when not at work, she said.

International travellers, including temporary foreign workers, must undergo self-isolation for 14 days and a Day 10 test. 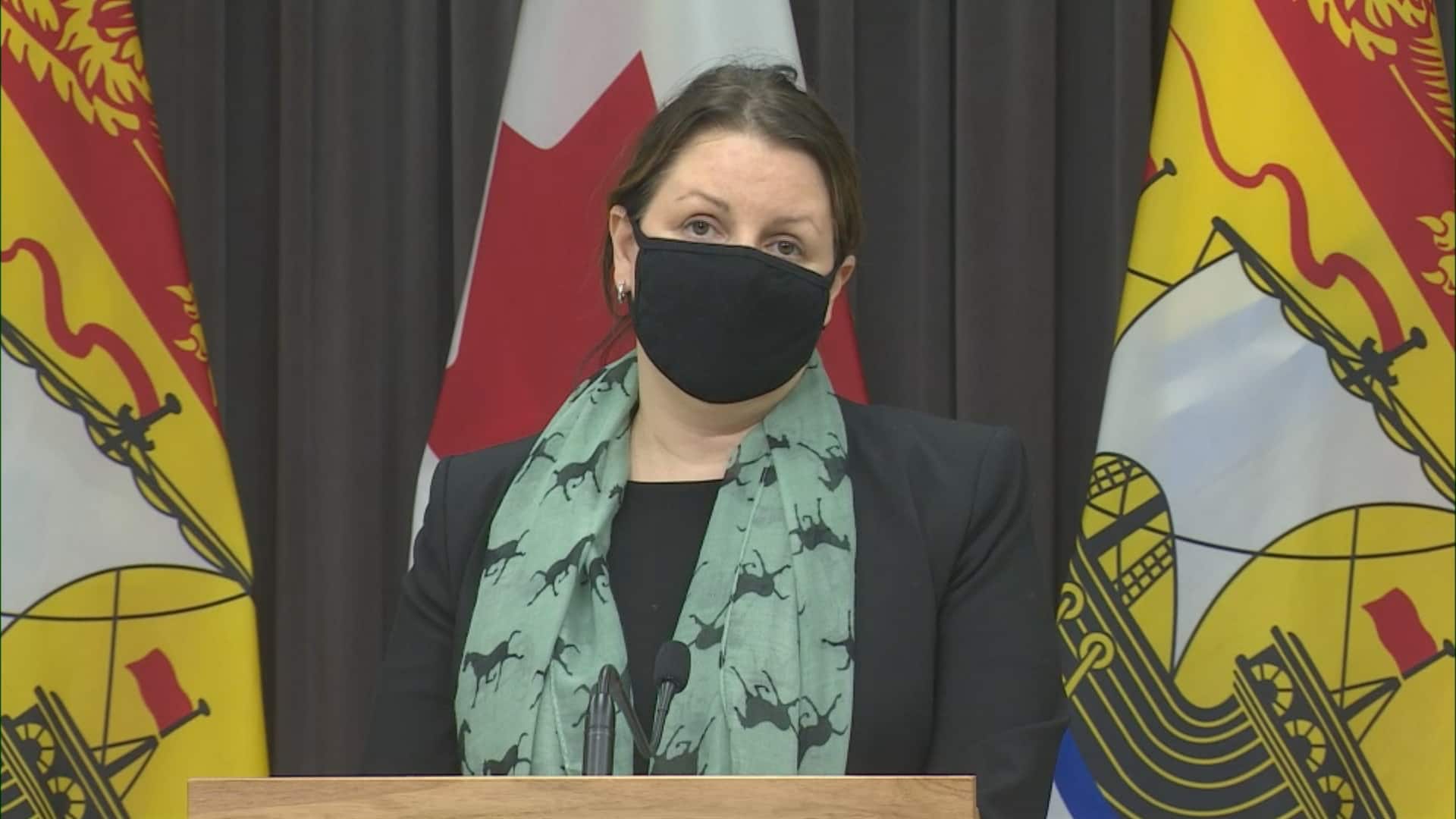 The new cases are in:

No patients are in hospital, which is “something to be thankful for,” said Russell. But she noted “dozens” of health-care workers remain off work and in isolation, so the health-care system remains “very vulnerable.”

Members of  PROMPT, the provincial rapid outbreak management team, are on-site at the Foyer Ste-Élizabeth nursing home and contact tracing is underway, said Russell. Residents and staff are being tested Friday.

Two new cases have been confirmed at Shannex’s Tucker Hall nursing home in Saint John, bringing the total to 20, including 13 residents and seven staff, she said.

Each home had one case confirmed on Thursday.

New Brunswick has had 735 confirmed cases of COVID-19 since the beginning of the pandemic.To date, 582 people have recovered and there have been nine COVID-related deaths. The death of a 10th person with COVID-19 was not related to the disease.

On Friday morning, Premier Blaine Higgs said the province should be able to stay out of the most restrictive red level, as long as New Brunswickers follow the rules.

There has been little conversation with Public Health officials about going to the red phase, which would see gyms closed, sports cancelled and gatherings restricted to fewer than five people, outdoors, Higgs said.

“Orange will do the trick,” he said during an all-party COVID cabinet committee interview with Information Morning Fredericton.

New Brunswick would only move into the red phase if clusters of COVID-19 show up in random areas and Public Health loses the ability to contact trace, or if the COVID-19 caseload continues to climb, Higgs said. This week began with 55 active cases on Monday.

Dr. Jennifer Russell, the chief medical health officer, has said in the past that a doubling of cases within six days is a possible trigger for moving back to red.

Although HIggs said he expects to see more cases of the virus in coming days following the holidays and New Year’s Eve celebrations, he’s optimistic New Brunswickers will adhere to the orange phase rules, which took effect provincewide Tuesday at midnight.

“We had to get the message to people [that] this is real,” he said.

“This thing could get away from us and that is exactly what’s happening in other provinces.

Nova Scotia has imposed a mandatory two-week quarantine for anyone arriving from New Brunswick, starting at 8 a.m. Saturday.

New Brunswick already has a similar quarantine requirement for anyone arriving from Nova Scotia.

In addition, anyone who has been in New Brunswick within the last two weeks is directed to self-isolate immediately, book a COVID-19 test, and remain quarantined until they get a clear test result, said Nova Scotia Chief Medical Officer of Health Dr. Robert Strang.

Most Bessborough classes to resume Monday

Students from Bessborough School in Moncton’s west end learned remotely on Friday. It was an “operational response” day following a report of a positive case of COVID-19 at the kindergarten to Grade 8 school on Wednesday.

The majority of students are expected to return to the school on Monday, with the exception of a few classes that will continue to learn remotely for the next two weeks, said Education Minister Dominic Cardy.

“We’ll provide further updates on that as the days go along,” he said.

The Anglophone East School District had tweeted about the positive case at Bessborough School on Wednesday night, saying the school would be closed Thursday to allow Public Health officials to conduct contact tracing.

Education Minister Dominic Cardy says he’s “as concerned” about COVID-19 as he was in March, partly because of the threat of the new, highly contagious variants from the U.K. and Africa.

“In addition to having those new variants, we also have nearly a year of grinding through this horrible pandemic, nearly a year of people obeying in nearly all instances, but also often getting confused and demoralized by the rules that have ever changed because the situation has been ever changing,” he said.

“And people who are just tired.”

Cardy urged people to continue to follow the Public Health measures, which have proven effective. They have helped avoid extensive transmission in schools and have minimized the impact of the pandemic on learning, he said during a live COVID-19 briefing in Fredericton on Friday. 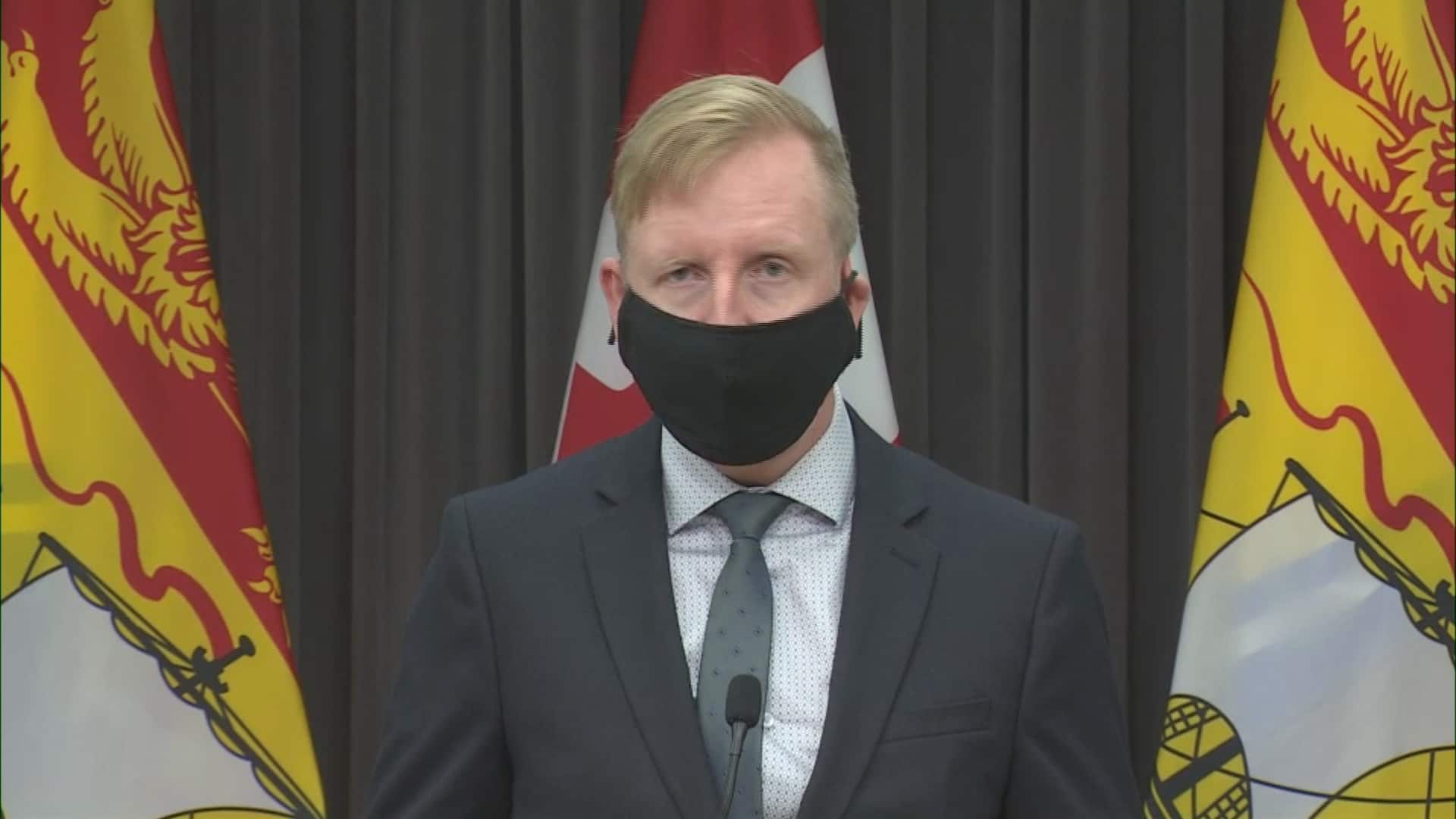 Education Minister Dominic Cardy says he is prepared to close schools in New Brunswick if Public Health recommends it. 6:22

“Everyone must co-operate to keep our schools healthy and safe for our students.”

Cardy provided a reminder of some of the rules for schools at the orange level recovery.

Staff and students of all ages must wear a mask in school and while on school buses. Masks may be removed when students are eating, drinking or engaged in sports or physical education classes. In addition, students in kindergarten to Grade 8 may remove their masks if they are working silently at their desk.

Extracurricular activities, including interscholastic and extramural sports, are limited to skills and drills practices within one team.

Physical education classes should focus on activities that allow for physical distancing, such as yoga, dancing and moderate walking.

No singing or use of wind instruments is allowed.

Fines could be issued for lying to contact tracers

Premier Blaine Higgs is reminding Brunswickers to be open and honest with contact tracers about their activity to prevent further spread of COVID-19.

He said investigators aren’t looking to fine people, they are trying to prevent further outbreaks.

Lying to contact tracers, however, will be treated as a higher level offence, he said, adding a mandatory order could be put in place and fines could be issued.

“There’s a shame in acting like you don’t have COVID,” he said.

During an interview Friday, Green Party Leader David Coon wanted to make it clear that if residents receive a call from New Brunswick Public Health, they are in “a safe space.” Contact tracers just want to make sure their information is correct, he said.

Both Coon and People’s Alliance Leader Kris Austin have previously been tested for COVID-19.

“Contact tracing is critical, just as testing is,” Austin said. “If we nail those things down, we’ll get out of this sooner than later.”

Although Premier Blaine Higgs said he is pleased about New Brunswick is getting vaccines, he is concerned about the unpredictability, timing and amount the province is receiving.

“Because of that, we aren’t able to plan,” said Higgs.

He said the province could vaccinate “up to” 45,000 people a week “at minimum,” and he’s pushing the federal government to deliver more vaccines to the province.

Higgs said he was on a call Thursday night with Prime Minister Justin Trudeau and other premiers from across Canada. He said every province is also prepared to receive more vaccines.

“Everybody wants the same thing.”

Interim Liberal Leader Roger Melanson said now isn’t the time to start criticizing the federal government about who gets the vaccine first.

“The last thing we want to start … is a conflict between provincial and federal governments regarding vaccines.”

He said the most important thing is a vaccine is on its way and everyone should get it.

In New Brunswick, residents of long-term care facilities over the age of 85 are the top priority for the latest batch of 2,400 doses.

The province has said its goal is to vaccinate all long-term care residents and staff before the end of March.

Green Party Leader David Coon said New Brunswickers don’t have a clear understanding as to how the vaccine will be administered.

Although people will receive a letter from the province letting them know they are eligible, Coon said communication needs to improve so everyone is aware of the plan.

Public Health has identified a positive case in a traveller who may have been infectious while on the following flights:

If you were at any of these locations, and you have no symptoms of COVID-19, self-monitor and follow all Public Health guidelines. If you are experiencing mild to moderate symptoms of COVID-19 and do not need to talk to a nurse, complete the self-assessment and get tested.

What to do if you have a symptom

People concerned they might have COVID-19 symptoms can take a self-assessment test online.

In children, symptoms have also included purple markings on the fingers and toes.

People with one of those symptoms should: