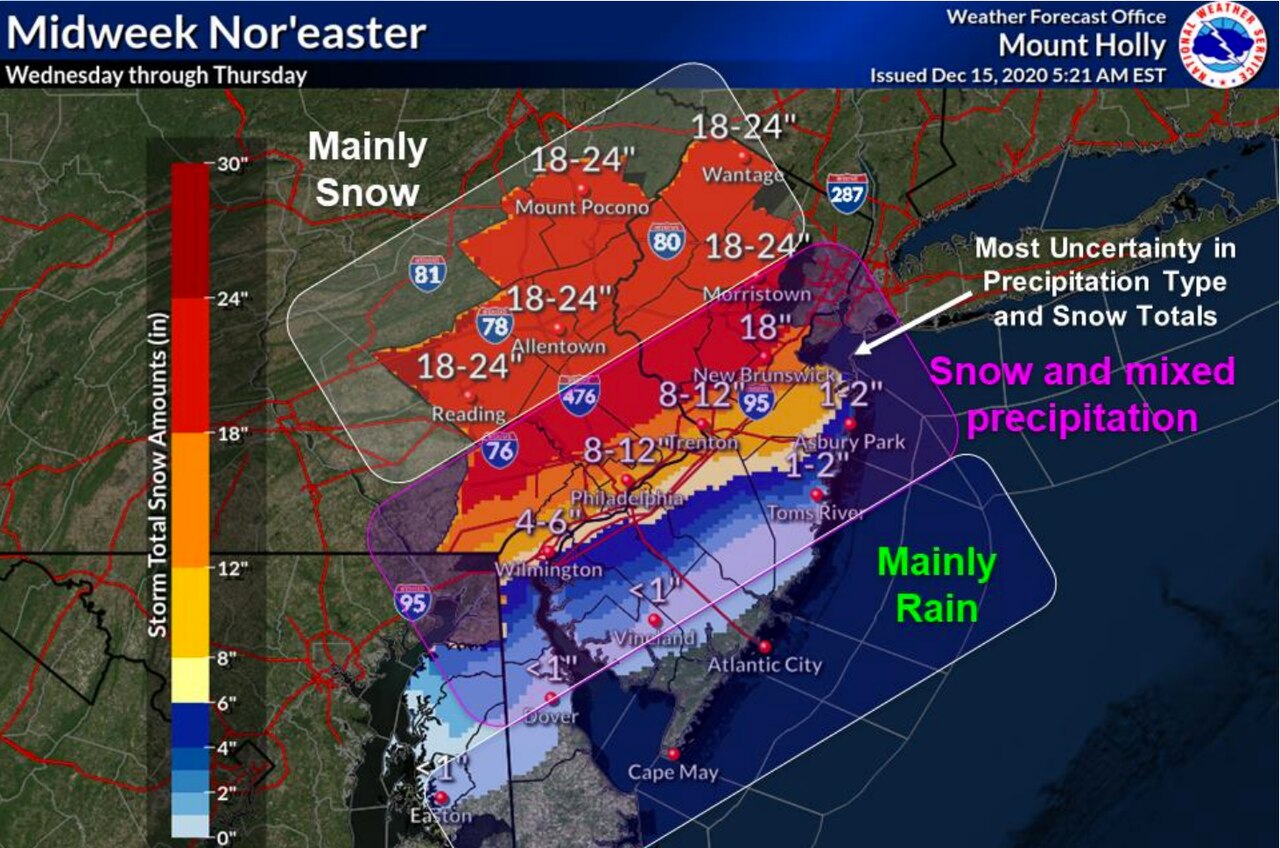 A winter storm is preparing to pack a punch on New Jersey, potentially dropping a record-setting amount of snow on the state. But whether or not you get two feet or nothing at all is highly dependent on location, Sean Rowland, a meteorologist with Hackettstown-based WeatherWorks told NJ Advance Media.

Areas northwest of I-95 could see significant snow accumulation, while areas southeast could just get dusting, with areas closer to Atlantic City seeing only rain.

“The dividing line likely is around or just a little southeast of I-95, so right along Turnpike, that’s where we’re going to see the mixing of sleet during the event and that cuts back on snow accumulation,” Rowland said.

I-95 is a common dividing line for storms in New Jersey, but that’s not because of the highway.

“Each region throughout the country has certain roads that just end up as natural dividing lines. One reason is that you do go a little higher in elevation the more Northwest (in New Jersey) you go, but that’s not necessarily why this storm (will divide that way),” Rowland said.

During this storm, the banding of the clouds will affect who sees the most snow, whereas Monday’s storm was primarily elevation driven.

Weather forecasts are fairly certain in the northernmost and southernmost parts of the state, Rowland said, with some fine-tuning still needed for exact total forecasts.

“Where there is still going to be some challenges is that corridor along I-95, within 30 miles east or west of 95 is probably the trickiest part of the forecast right now,” Rowland said.

That depends on the specific track of the storm, meteorologists said.

“A shift farther to the east or west by 25 miles can have a huge impact on accumulation of snow versus more mixing of rain and snow and plain rain,” AccuWeather senior meteorologist Courtney Travis previously told NJ Advance Media.

The forecast by WeatherWorks is much tamer than those issued by AccuWeather and the National Weather Service, predicting 12 inches for much of the northern part of the state and 4-8 inches in the New Brunswick area.

“Our thought is that there’s going to be a lot of places in North Jersey that see a foot, there possibly could be some that get up to 16 or 18 inches, but it’s going to be very difficult for somebody to see two feet. I think that’s kind of unlikely,” Rowland said.

The snow will start in the mid- to late-afternoon, continuing until daybreak on Thursday, Rowland said. And even areas that don’t see high snow totals should brace for a high-impact storm because of sleet.

“The issue with sleet is that sleet bonds easily to the road, and it’s very difficult to remove, and sleet is also very dense,” Rowland said.

That will create dangerous travel conditions across large swaths of the state.

“Travel is highly, highly not recommended in the evening and into Thursday or on Wednesday night. It is very high impact,” Rowland said.

Thank you for relying on us to provide the journalism you can trust. Please consider supporting NJ.com with a subscription.

Katie Kausch may be reached at kkausch@njadvancemedia.com. Tell us your coronavirus story or send a tip here.