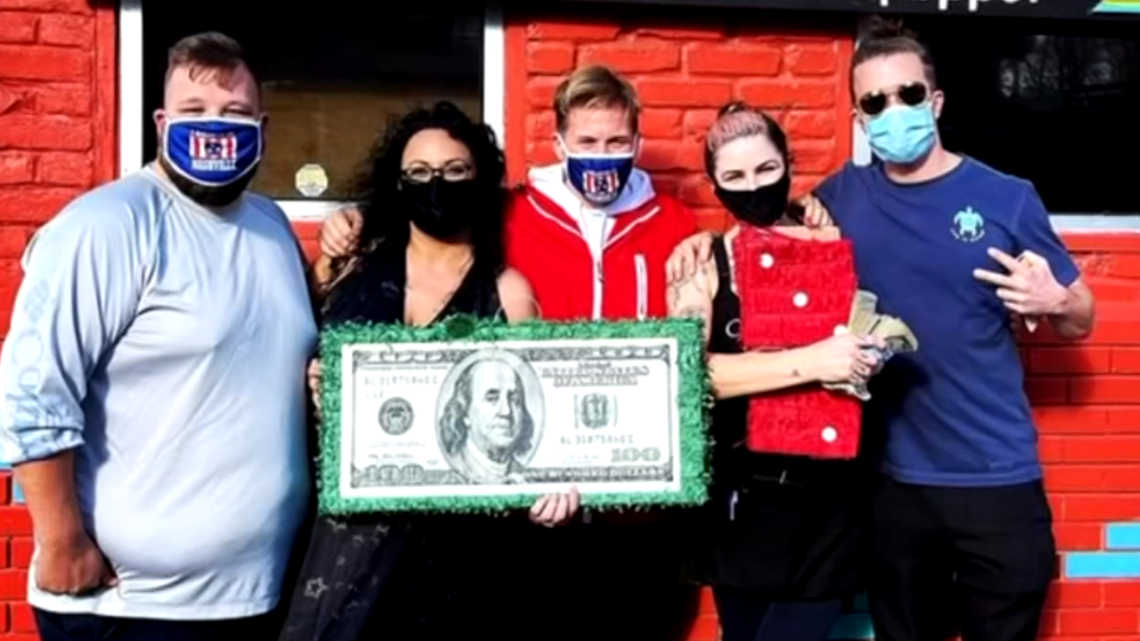 NASHVILLE, Tenn — Carrie Taylor went into work early on Saturday at Rosepepper Cantina, not knowing the VIP table her boss wanted her to serve would be surprising her.

The mom of four says she’s been a server at Rosepepper for 17 years and even though it’s a job she loves, like many others in the restaurant industry, the pandemic has hit hard.

“I think, like, we are really a successful restaurant but I think, like any small business, it’s just one foot in front of the other. Like how are we going to keep this momentum going?” she said.

She also has been trying to keep the momentum going at home with her kids and bills stacking up.

Saturday, as Taylor approached the VIP table she was requested to serve to drop off the bill, there were two piñatas hanging. The four guests told her, “we’re going to play a game and you’re going to pick a piñata and your tip is in one of these.”

She went on to say, “they blindfolded me. I picked a piñata and beat it to death, which was hilarious, and when it fell down it was just full of cash. And I didn’t know what to say. I was like is this a joke?”

In total, they gave her $3,500. Not only did she get the piñata she broke but they told her to bring the other one home for her kids to break open.

“It was a lot, it was a lot to take in. I was sobbing on this man’s shoulder. Just like ugly girl crying on his shoulder.”

Charlie “Rocket” Jabaley is the man Carrie Taylor cried on. He’s a YouTuber who travels the country on what he calls a “Dream Machine Tour,” giving to deserving people.

Taylor had never heard of him but she looked him up after she got home from her shift. She said, “There was all these amazing things that he did. Like, he was buying minivans for people that didn’t have a way to get their kids to and from. They were paying people’s rent for a couple of months so they could catch up. All these things, like all these amazing things.”

For Taylor, this money meant paying bills and providing some kind of Christmas for her kids. A Christmas Taylor said would have been small, “And it still will be, not because the gift wasn’t amazing. Because it’s amazing. But I’m trying to distribute it where it’s going to benefit the family most. So, I want them to have a good Christmas but long term I would rather them have electricity you know? And gas in the car.”

Charlie “Rocket” recorded Taylor’s reaction to the gift but hasn’t posted that video yet on his YouTube. He has, however, made a post on Instagram about it and Taylor wanted to make one point about some of the comments its received.

She said, “people were saying a lot of things like it doesn’t count if you put it on the internet, like it doesn’t count if you tell people. And it was all I could do to not comment because it does count. It does count. Like to every single person that he’s helped, it still counts. Him posting on it and letting people know that there are good things out there, didn’t negate what he did for my family or for all these other people that he helped. And I don’t think that they realized if you have a charity organization like that, it’s helpful to build the supporters if people know you’re doing it.”

Her message to others, to always remember there’s a lot more under what you see in people and to always be kind.