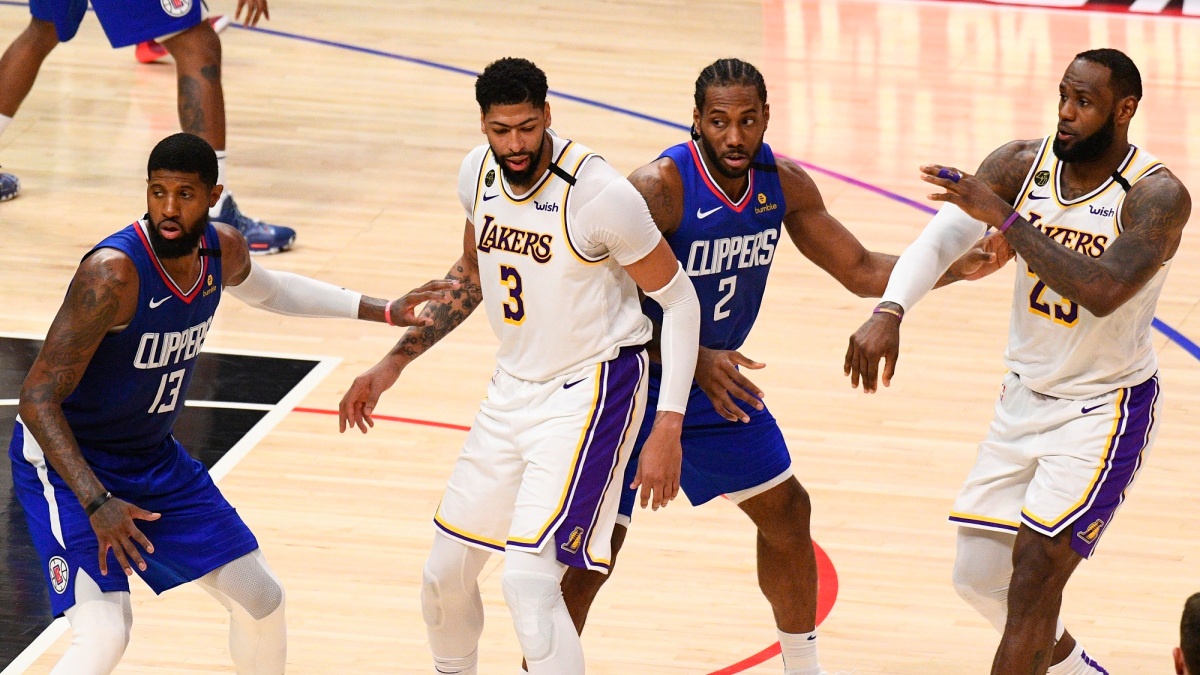 The 2020-21 NBA season will be the coronavirus season, even more than last season, which required a months-long stoppage and ultimately concluded in a Disney-sponsored bubble that was arguably the safest place on the planet with regard to COVID-19.

The upcoming season, which tips off in Los Angeles Tuesday night at Staples Center in front of an empty house and features the Lakers and Clippers going head to head, should carry us from the deepest depths of the pandemic through the hopeful spring and expected return to some level of normalcy by summer.

The league itself may not be a hotbed of cases, though the rigorous travel and current climate pose serious challenges, but the season will be played to the soundtrack of the virus.

Basketball has long been a winter escape, with Angelenos extending their evenings and their families with the Lakers and, to a lesser extent historically, the Clippers. On the heels of the winter solstice, the battle for LA will be played in a city under a statewide curfew and a local health order that requires non-essential businesses to shutter.

Hospitalizations in LA County as of Monday night were officially listed at 5,709, with 1,199 in ICU units and 56 new deaths for a total of 8,931 residents lost to the virus this year. Compare those figures to Oct. 11, when the Lakers beat the Heat to claim the franchise’s 17th title, and hospitalizations have increased nearly 800%; the number of ICU patients has jumped from 186 to nearly 1,200; and 2,160 people have perished due to the coronavirus.

The external climate is clearly not factoring into why the NBA is starting on Tuesday.

“When people are losing lives…I think you can only go with [industries] that are the very safest,” Los Angeles Mayor Eric Garcetti said Monday evening when NBCLA asked about the start of the league at such a devastating time for the city. “I think the NBA was a model, so I will continue to monitor that.”

Even if testing and protocols have allowed the NBA season to go ahead and had the mayor extolling the NBA’s bubble accomplishments, it’s difficult to deny that the season is starting at this unique time because of the potential loss of revenue by a later start date and shortened season. The NBA appears to be taking greater risks during the deadliest portion of a once-in-a-century pandemic that had counted nearly 320,000 victims in the Unites States as of Monday.

On the eve of the new season, the NBA’s commissioner justified the league’s return by stating that “tens of thousands of people rely on the league and its related businesses for their livelihoods.”

“I think we are prepared for isolated cases; in fact, based on what we’ve seen in the preseason, based on watching other leagues operating outside a bubble, unfortunately, it seems somewhat inevitable,” Commissioner Adam Silver said. “We’re prepared for all contingencies.”

With regard to the teams at the heart of Los Angeles Tuesday night, the Lakers are clear favorites to repeat as champions. Barring injuries, the Lakers should be hoisting a record-breaking 18th championship trophy this summer, and hopefully fans can be present and celebrate the success.

For the city, it would be the perfect return to normalcy after what has been a year in the Twilight Zone.

LeBron James continues to be the best player on the planet, even as he turns 36 next week. The Lakers gave the reigning NBA Finals Most Valuable Player a two-year contract extension worth $85 million.

James’ running mate and the best defensive player in the league by several measures, Anthony Davis, also signed a big contract with the purple and gold. Davis expects to the be the centerpiece of the franchise over the next five years at a price of $190 million, and he is well worth that price in a league flush with cash.

Again, the Lakers and the NBA are not about to go out of business and the juxtaposition of people lining up for food banks because they have lost their businesses or jobs and two stars signing contracts worth more than a quarter billion dollars can’t help but add wrinkles to foreheads. One has a tough time ignoring the privilege the NBA enjoys at such a dim time for the nation and the city.

A drag strip in Pomona was turned into a food bank. Annette Arreola reports for the NBC4 News at 11 a.m. on Wednesday April 15, 2020.

Returning to the basketball, though, the Lakers’ primary weakness a season ago was their lack of depth. With the additions of Montrezl Harrell, Dennis Schröder, Marc Gasol and Wesley Matthews, along with the re-signing of Markieff Morris, the Lakers have significantly upgraded the roster’s depth. In addition, Kyle Kuzma signed a hefty extension and joins fan favorite Alex Caruso in returning to what suddenly amounts to the strongest roster in the league. And that’s before acknowledging the arrival of barely 20-year-old preseason MVP Talen Horton-Tucker.

For the other locker room at Staples Center, the offseason discussion begins with the Clippers losing Harrell, who was the Sixth Man of the Year a year ago. That departure hurt their depth at the forward position. However, adding Serge Ibaka from the Toronto Raptors and Nicolas Batum from the Charlotte Hornets softened that blow and provided Leonard with a familiar teammate in Ibaka.

Luke Kennard was also a major offseason addition to the team that traded away Landry Shamet to acquire the 24-year-old guard from the Detroit Pistons.

The Clippers will still go only as far as their superstar duo of Kawhi Leonard and Paul George, who hope to avenge their second round blown 3-1 series lead in the playoffs, takes them. Last season’s disappointing and embarrassing conclusion cost coach Doc Rivers his job and pushed assistant coach Tyron Lue forward to take the reigns. Lue, memorably, coached James’ Cleveland Cavaliers to a title in 2016.

Beyond Leonard and George, the Clippers will hope to get more production from center Ivica Zubac this season, with the Croatian performing well in the bubble. Retaining Marcus Morris Sr. certainly helped the Clippers’ chances of challenging the Lakers. With regards to returning players, Patrick Beverly still provides defensive toughness and three-point shooting, while perennial Sixth Man of the Year candidate Lou Williams plays the part of the professional scorer off the bench.

Just as a season ago, the Lakers and Clippers put out two of the best teams in the NBA, with both considered title contenders on opening night. Tuesday night at Staples Center should provide elite basketball and be a welcome sight for the city, even if it comes at the darkest time in the region’s war with the coronavirus.

Perhaps if nothing else, the return of the NBA will help keep people in Southern California inside their homes and help slow the spread of the virus. Because while watching James and Davis and Leonard and George battle may help return some normalcy, the empty stands will provide a reminder that the city is in one of its darkest winters.

If all goes well, the Staples Center stands will fill up in the coming months, even if not all at once, and their periodic population can perhaps help serve as updates to the city inevitably, eventually claiming victory over the virus.