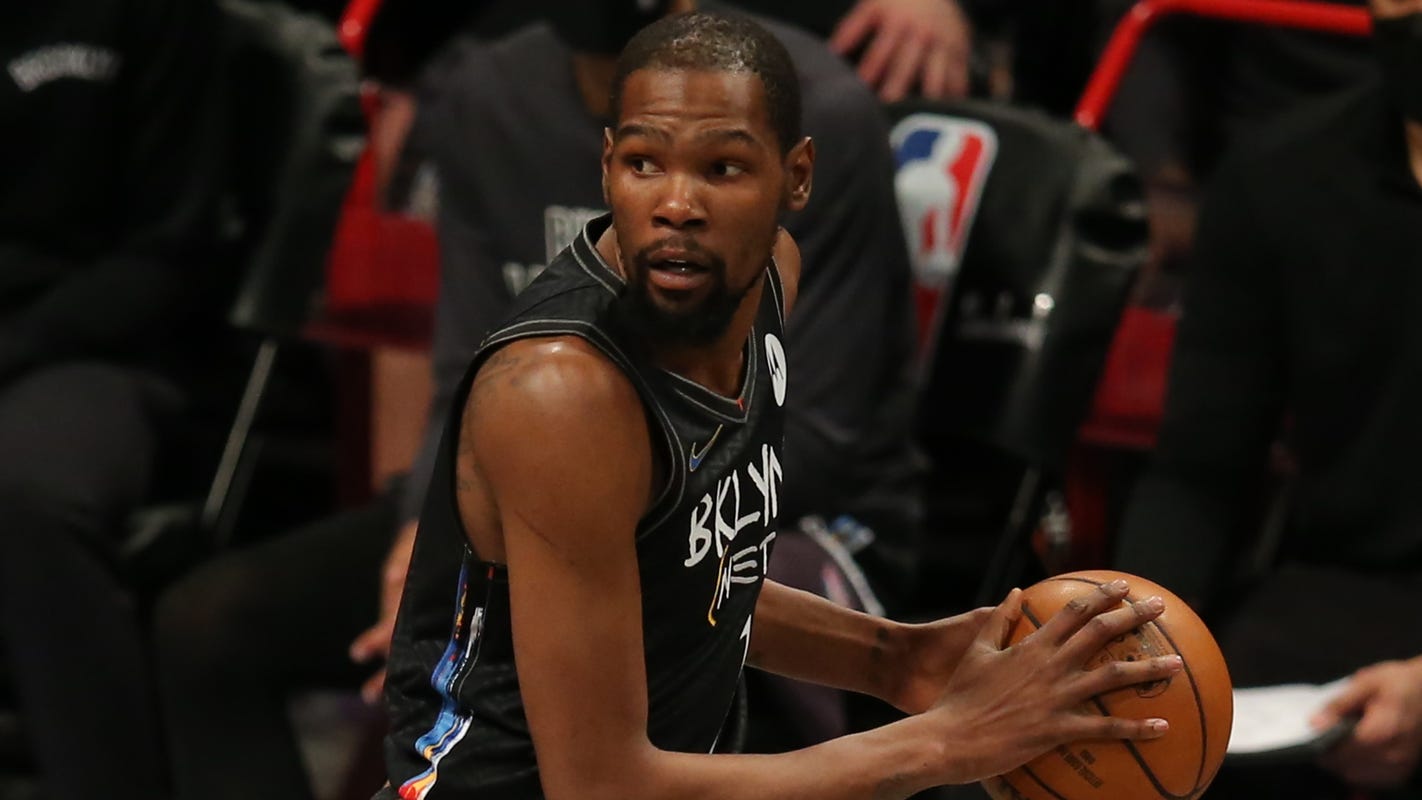 A strange scene unfolded at Barclays Center when Brooklyn Nets star Kevin Durant did not start the game due to NBA health and safety protocols, then was cleared to play only to ultimately be pulled during the third quarter and ruled out for the rest of the night.

Durant was ruled unavailable to start shortly before the Nets tipped off Friday against the Toronto Raptors because of COVID-19 contact tracing. After being cleared, Durant entered the game at the 4:13 mark of the first quarter.

Durant played the rest of the first half and started the third quarter for Brooklyn. He was then removed from the game with 9:06 left in the third during a coach’s challenge. While play was stopped, Durant was seated in the bench area when cameras showed a Nets team staffer approach and inform him he was being ruled out. Durant was seen shaking in head in frustration as he headed to the locker room.

This appears to be the moment KD learned he would be out the rest of the game due to health and safety protocols. pic.twitter.com/KGJan8mFNr

Shortly after, the team announced Durant would not return due to health and safety protocols, but did not provide any additional details.

As the game finished without him, Durant took to Twitter from the locker room and tweeted, “Free me.”

In a statement, the NBA said Durant had tested negative three times in the last 24 hours, including two PCR tests Friday. League spokesman Tim Frank said someone with whom Durant interacted during the afternoon returned an inconclusive COVID-19 test shortly before the game, and Durant was held out to start.

“Under the league’s health and safety protocols, we do not require a player to be quarantined until a close contact has a confirmed positive test,” Frank said. “During the game, a positive result was returned for the person Durant interacted with. … Once that test was confirmed positive, out of an abundance of caution, Durant was removed from the game.”

Durant did not appear satisfied with the league’s statement on the situation, returning to Twitter to write, “Yo @nba, your fans aren’t dumb!!!! You can’t fool em with your Wack ass PR tactics. #FREE7”

Durant’s teammates were just as frustrated and confused as he was.

“For him to not start, then play, then he couldn’t play, just doesn’t make any sense,” said Joe Harris. “But I don’t make the decisions. I just work here.”

James Harden questioned why the game was even played when Durant was around the Nets before tip-off.

“They just said contract tracing and I’m thinking to myself, ‘Well, if it’s contact tracing, then we were all in the locker room together. That means there’s no game if he’s not going to be able to play.’ That was my thought process,” Harden said.

The Nets are conducting contact tracing to see if Durant was in close contact with the person who tested positive.

Durant finished with eight points, six rebounds and five assists in 19 minutes. He came off the bench as a reserve for the first time in 867 career games. Brooklyn lost 123-117.

“It’s tough to lose Kevin Durant twice in one night,” Nets coach Steve Nash said during an ESPN interview after the third quarter. “It wasn’t easy, but we got to be adaptable. This is the type of season it’s going to be, we’ve got a lot going on in our world. We got a lot of guys who can step up.”

Durant missed three games last month while completing a seven-day quarantine after being exposed to someone with coronavirus. Durant himself tested positive for COVID-19 in March.

Kevin Durant came off the bench for the first time in his career. (Photo: Brad Penner, USA TODAY Sports)