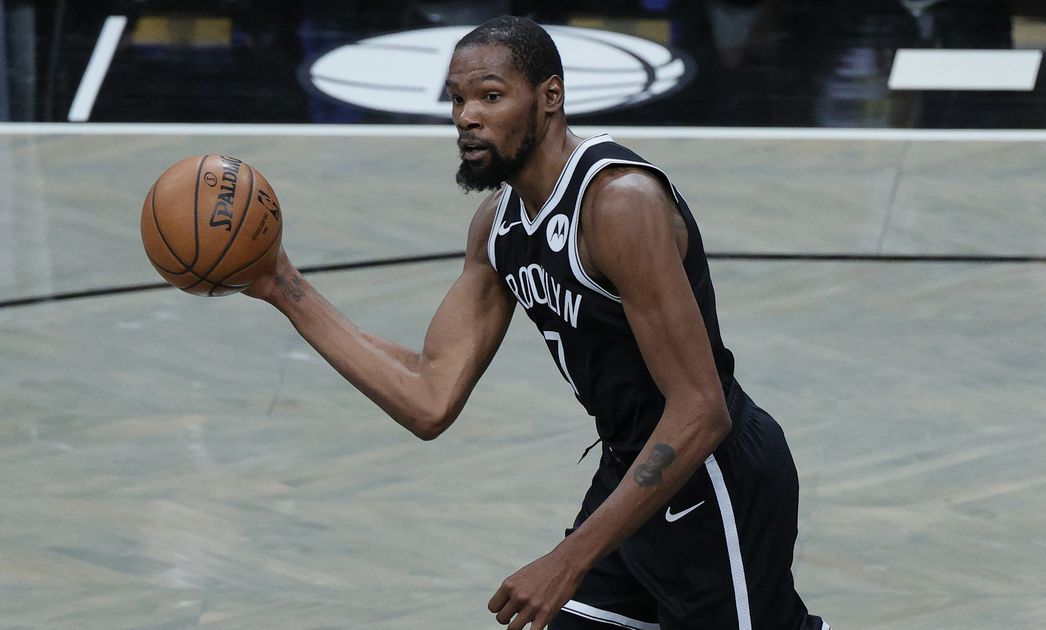 It was worth that wait! Eighteen months after Kevin Durant and Kyrie Irving agreed to sign with the Nets, the two officially took the court for the first time Tuesday night and wowed everyone watching.

The Nets, led by Kev and Ky —as their teammates call them, didn’t take their foot off the gas pedal all that much in their season-opener, smothering the Warriors 125-96 at an empty Barclays Center. And it wasn’t that close. Brooklyn made a strong statement that it’s a new era of Nets basketball and the team is here to compete. It was all Nets.

Following a 40 point first quarter, which is the most points the franchise has ever tallied in a season opener, Brooklyn closed the first half with a dominant 18 point lead, led by the Nets superstar duo combining for 36 of their 63 first half points.

To put it in perspective, the Nets had just three 18+ halftime leads all of last season. While piling 63 first half points, it came at an efficient level: 48.9 percent overall and 45.0 percent from deep. Despite the offensive onslaught, the Nets did turn over the ball 13 times in the first half.

Following a productive third quarter, outscoring Golden State 36-26, the game was a wrap with the Nets heading into the final 12 minutes of play with a 28-point lead, which meant Kev and Ky’s night was over.

Irving put on another stellar Nets season-opener performance, booking a team-high 26 points, four rebounds, and four assists in 25 minutes of play. The New Jersey native shot 10-of-16 overall and 4-of-7 from deep.

Durant showcased that he’s back. While sitting out the entirety of the fourth quarter, the Nets superstar finished with 22 points, five rebounds, and three assists in 25 minutes of play – shooting 7-of-16 overall and 1-of-2 from three.

“That’s true and fair,” Steve Nash said when asked how Durant looked over three quarters. “He’s done everything and he is in absolutely the ultimate position to come back from this injury. But we also have to give Kevin time to play NBA games and not get carried away. He looks amazing, he’s playing amazing, but I want to just give him breathing room and not put on too much pressure after not playing competitive basketball for 18 months.”

For his part, Durant spoke highly of the Nets defensive effort rather than their high-powered offense.

“I think we had a solid first start,” Durant said. “We have been emphasizing the defensive side of the basketball all training camp and to have them come out and shoot 37 percent from the field, 30 percent from the three – that is a good start. We want to build on it and I was looking forward to coming out here and getting the W. I’m glad we were able to finish the job.”

Outside of the superstar duo, Caris LeVert thrived (once again) as the team’s second unit leader, finishing with 20 points, nine rebounds, five assists, two steals and a block in 25 minutes of play in 25 minutes of play. A total of four Nets finished the season-opener in double-figures.

With the win, Nash books his first win as the Nets head coach while the franchise snaps a seven-game season-opener losing skid.

Kerr and the Golden State Warriors know better than anyone what a healthy Durant looks like on the NBA hardwood. In fact, Kerr couldn’t tell a difference from when he last played with the Warriors to how he played in the Nets’ final preseason game against the Boston Celtics.

Overall, it is all love between Golden State and the Nets superstar.

It’s been 561 days since Kevin Durant played an official game in the NBA and 325 for Kyrie Irving. But who’s counting?

If you were wondering whether Kyrie Irving would have a lot to say in the post-game media session, the answer was yes. Just as he had in his 17-minute discussion to break his media silence last week, Irving touched on a number of subjects in answering reporters…

Irving on the win: “I’m always grateful to put on a uniform, strap on my shoes. It’s been a long journey to get here and to be able to master this craft. To learn that it’s not just about hero-basketball, it’s about how great the team is. I think I got caught up in that in my career a few times, just trying to play hero-basketball… when the team success is really going to dictate how great you are as an individual, and how great you play your role. Being here at this present moment, I’m enjoying that and embracing it. Not really doing too much talking. It’s just really about the action. Let’s go out there, throw the ball in the air, and see who is the best of the best.”

Irving on his past love for hero-ball: “I think it’s just the right time, right situation, right environment. As a young player, you think scoring a bunch of points, doing a bunch of things, getting individual accolades is great. I definitely was going after those things. And now, I really don’t care for any of those individual accolades or goals. It really doesn’t bother me. I know I’m validated culturally. That’s all that matters. I don’t need an All-NBA. I don’t need MVP. I just want a championship with a great team that I can look back on in history and say ‘we did it our way and we had fun doing it.’ I’m in year ten. All I want to do is enjoy every single day I’m playing basketball and coming into work.”

Irving on the team’s depth: “We wanna be the best team. We don’t wanna be a great collection of just me and KD, or other guys that we have on this team. We’re a great team, and we wanna be identified as the Brooklyn Nets TEAM. I’m not the leading voice of the locker room. I’m not the leader here. I’m not this one guy that’s dependent upon to get us over the hump. No, we have other great players who are developing, that are already established. We just need to continue to give knowledge when needed to these players that are thirsty for it––these guys here wanna win just as bad as us. When you have that winning mentality and attitude, it’s easy for me to fall in line and follow direction. And just keep it simple around here. It’s basketball. We’ve been doing this for a long time, and now we’re at the top of the top. And now’s our chance to show why we are that way.”

There were many takeaways to be had in Brooklyn’s regular season opener––Kyrie doing… ridiculous things, KD’s dexterity, Joe Harris’ continued comfortability (is that a word?) next to two superstar profiles. But an under-the-radar thing to appreciate was Caris LeVert’s commitment to defense. For starters, he took on the Stephen Curry responsibility head-on. Not a fear in the world.

Watch here for his non-stop activity. After Jeff Green gets caught up on a Juan Toscano-Anderson screen, Caris LeVert does a prolific job tagging BOTH James Wiseman rolling to the basket AND Stephen Curry on the drive. You typically see this type of legwork done by a big man––think Jarrett Allen.

But Caris? No problem. He bats the ball out of Curry’s hands, which produces a big-time slam from Jeff Green on the other end (get used to those).

This one also stuck one: One of the big wish-list items for the season was to perhaps see Kyrie Irving used in an off-ball role more. In his first Brooklyn season, Irving sniped 45.9 percent of his catch-and-shoot looks, but only took 1.9 per game––far less than the likes of, say, Bradley Beal (4.4 per game on a horrific Wizards team), Kyle Lowry (3.6), and Kemba Walker (2.6). As such a lights-out marksman, it’d be ideal to get him more easy, spoonfed looks.

Well, consider this a welcome sign. Here, in the first clip of this video from the Nets official Twitter account, the Nets run him off a weak-side stagger screen, which gives Irving the mismatch with Eric Paschall. The second-year Warrior is as good as a cooked Christmas ham, as Irving busts out a couple crossovers and the pull-up midrange “J.”

LeVert told the media post-game that he likes the way Nash is using him.

“For me, I try to take on the challenge and try to lead the second unit,” LeVert said. “If we are up five and trying to push that lead to 10 or 15 or make our mark on the defensive end, I feel like we [the second group] can play. We can impose our will on the game just like the first group can. We try to come in and give energy where it is needed and I think we did that today.”

The Nets candidate for Sixth Man of the Year also had praise for the player he backs up.

“Super helpful. Super, super, super helpful,” LeVert said of Irving. “He’s one of those guys that is calling me after a good game, calling me after a bad game, talking after every practice, talking on the plane, and just constant communication. I think him for that every day. He is on me each and every day. It is always truthful, always real, and always not exactly what I want to hear but it is the right thing to say so I definitely cherish that for sure.”

The NBA pumped crowd sound into the empty arena with ooh’s and aah’s and other sounds of the season filling the void. Then, in a perfect coda, as the game came to an end with a Nets win, you could hear a familiar chant, “Brooook-lyn, Brooook-lyn.”

This was a different season opener, in December, in an empty arena, but the Nets wanted to make sure that one thing got done. They wanted to honor the city’s essential workers, from a nurse to a bus driver to a hospital environment officer.

And they did it with a touch of class, inviting five workers to the opener where they were addressed by Spencer Dinwiddie on behalf of the team and a banner honoring them was hoisted into the rafters where it hang as a reminder of what we all owe them.

If you want to know more about those honored the the program, sponsored by Joe Tsai’s BSE Global, it can be found here.

The Nets season-opener was televised in China, according to Tim Reynolds of The Associated Press.

In addition to both games being streamed on Tencent, the game was aired on CCTV (China Central Television) 5, the ESPN of China. The league has contracts with both CCTV and Tencent, but after the controversy over Daryl Morey’s “Free Hong Kong” tweet, CCTV shut off all NBA games until the last two games of the NBA Finals. Back then, the future of games on CCTV-5 was uncertain.

Then on Tuesday came news that CCTV-5 would once again air regular season games. The decision means hundreds of millions of dollars for the cash-strapped league.

Cheese is back – Jeremiah Martin is gone

Chris Chiozza is back in a Brooklyn Nets uniform after signing another two-way contract with the organization. The fan favorite was waived on Friday, but it now appears the Nets and Chiozza had mapped out the plan for his future.

After he cleared waivers on Monday, Chiozza became a free agent. Then, on Tuesday, the Nets opened a slot by cutting two-way player Jeremiah Martin, who like Chiozza, is a point guard.

He apparently also received a $50,000 guarantee earlier in the month

The Nets will be playing on Christmas Day for the first time since 2013. The team will travel to TD Garden to play the Boston Celtics in another Irving return. The last time these two teams played each other was Friday when Brooklyn defeated Boston 113-89 in their final preseason game.

The Christmas Day matchup tips off at 5:00 PM.