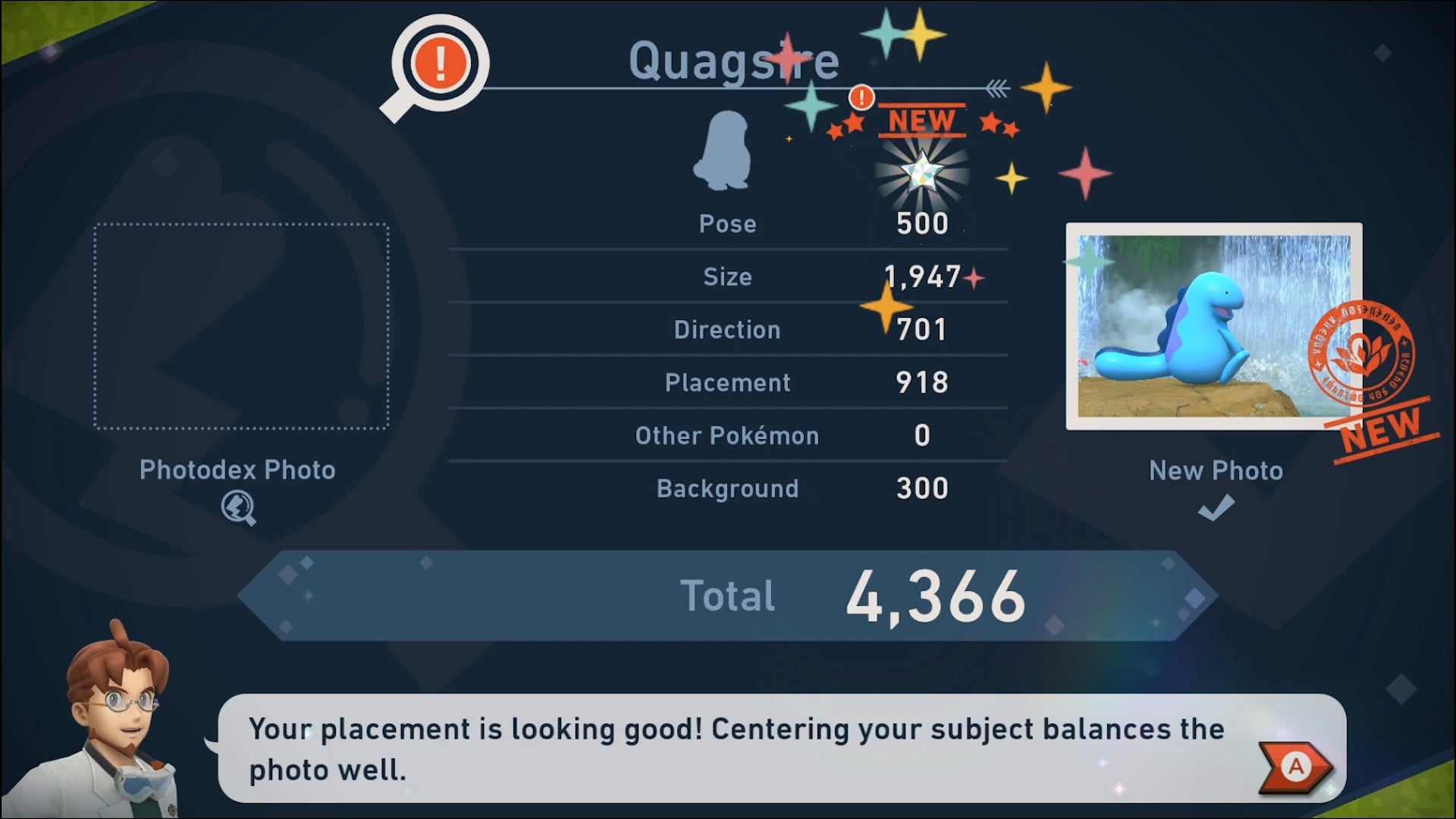 First, let’s talk about Photo Ratings! Each Photo has two evaluation factors – the Star rating and a numerical score – which are completely separate! The Star rating represents how rare the Pokemon’s behavior you’ve captured is, and the score – the quality of the photo – affects the color of those stars – Bronze, Sliver, Gold, or Diamond. You need a score of 4,000 or more to get a Diamond rating!

Pokemon Have Many Behaviors

There are often multiple ways to capture a photo of each Star rating, so don’t stress too much about trying to perfect a particular photograph since, more often than not, you’ll find better opportunities as you progress through the different course Research Levels.

How to Get Easy 2-Star Photos

Generally, most Pokemon will display a 2-Star behavior if you scan it or bop it with a Fluffruit. The pose scores won’t be the best they can be, but it’s an easy way to add a new behavior to your Photodex!

Some Pokemon will wake up or react with a special action after being hit with a Fluffruit or Illumina Orb, and just because they didn’t react to one, doesn’t mean the won’t react to the other. Try both on each Pokemon – especially if you’re suspicious and trying to trigger a behavior.

Speaking of throwing objects randomly, sometimes a Pokemon may look like it’s looking around for something. Odds are, there is actually something of interest there – throw Illumina Orbs and Fluffruit in the vicinity to potentially trigger something!

Out of all the criteria on the photo scoring rubric, size is the most important. You can get up to 2000 points depending on the size of a Pokemon in your shot, while direction and placement only go up to 1,000, and the rest are generally always under 1,000 except for the rarest of Pokemon, which get a huge bonus for Pose regardless of what they’re doing.

Timing is Everything for Pose Score

You’ll get stars for your photos based on a Pokemon’s behavior alone, but you’ve got to time it just right if you want to get a high Pose score. You’ll get more Pose points for capturing a behavior mid-action – like when Pikipek is striking a tree versus when it’s taking a break.

Extra Pokemon Are a Bonus, Not a Goal

It’s a bit difficult to plan for a good photo with additional Pokemon – which also need to be big and unobstructed to score well – and a nice background, like the Park’s flower field or Jungle’s waterfall, so we suggest treating these as nice bonuses rather than aiming for them specifically.

The LenTalk side quests are generally clues to capturing hidden Pokemon or rare behaviors – but some of them also gift stickers and other decorations for your photos. You’ll need to submit the photo for evaluation to Professor Mirror at the end of a course, and the timing has to be just about perfect in order for these to count.

How to Skip the Eval

Hold A to speed through all the ratings after you submit your photos! You might miss some interesting comments from Professor Mirror, though.

How to Level Up Research Level

You’ll get the most expedition points from photos of new Pokemon and / or recording new behaviors on that particular course. If you’re choosing between different Star-rated photos that will be duplicates, choose the photo with the most improvement compared to the past one – you get points for the difference! However, keep in mind that maxing out a course’s Research Level beyond Level 3 doesn’t add anything specifically new to the course, but you will get a Research Title for doing so.

You can choose the research level you play through on a course after you reach new levels! Do this by pressing X while hovering over a course option. Sometimes it’s worth replaying a course at a lower level when certain Pokemon actions are featured more prominently. This is good to try if you’re seeing your XP gain slow down exponentially.

Remember to use the Resnap feature to adjust things like focus and positioning right after submitting your photos! You won’t be able to do this later, but you can still add stickers, frames, and fun filters to them later .

If you run out of photo film during a course, it will end! Unless it’s your first time there – then you’ll have to finish the course without taking any more photos.

Be sure to change the Camera Speed and Pointer Speed in the settings to make turning faster! You can also change the settings so you can take photos with the right bumper instead of A. Why not ZR like every FPS ever? Who knows.

Using both sticks to control the photo frame and the pointer can get wonky and cumbersome, fast. Try using just one or the other instead!

Use the control pad to quickly turn around – down for an immediate 180, and left or right for quicker than normal turns.

Scan often when first exploring each course as you will be surprised at how often you’ll find Pokemon hiding in areas you may not have initially thought to look!

If a Pokemon is flying or running in a certain direction, watch its path. It’ll often stop somewhere (or appear close enough) for you to get a good shot of it.

Pokemon habits and colors change even on a course of the same level! Keep looking around (especially behind you) as you replay! Some Pokemon may even follow you, providing a perfect photo op, and some special Pokemon interactions only happen after the NEO-ONE is leaving an area in the higher levels. Watch behind you and be ready to snap a photo.

Keep An Ear Out

As you travel through each course, be sure to listen closely for audio cues. These cues will usually indicate that a Pokemon in the area is doing some kind of unique behavior. You’ll also occasionally hear from Professor Mirror and the rest of the Research team, who will often provide small yet helpful hints as you approach areas of interest.

Lastly, always submit your photos – even if you don’t think they’re very good. You may get points for them anyway.