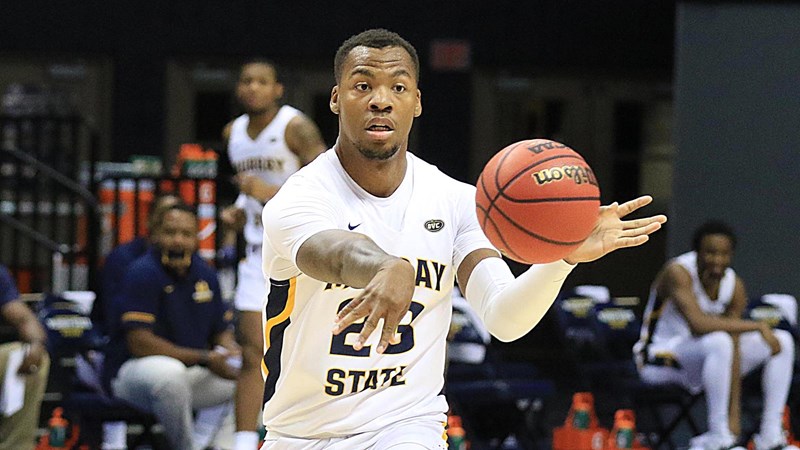 Racers & Govs – Odd Things In An Odd 2020-21 Season
From this point forward, the Murray State Racers sole focus is on games in the 73rd season in the Ohio Valley Conference and their quest to win the regular season championship for a fourth-straight season. The Racers travel to Clarksville, Tennessee Monday to face off with the Austin Peay Governors in an 8 p.m. tip at the Dunn Center.

The 2020-21 season continues to give us things we have never seen before. For example, Monday’s game will be the first time the Racers and Governors have met twice in the month of December and it will mark the first time in either team’s history to play five games in one calendar year. Last February, the two played a pair of OVC regular season games and they met in March when the Racers won a semifinal game of the OVC Tournament. Add in their Dec. 8 meeting and it makes for five games in one year between MSU and APSU.

Racers Roll Past APSU In OVC Opener
On Dec. 8, the Racers defeated APSU 87-57 in the OVC opener in Murray, Kentucky. The win for the Racers was their third consecutive win over their rivals and nine of the last 12. The Racers used a 17-0 run to decide the game in the first half when they led 41-18. Seven minutes into the second half, the Racers pushed to a 27-point lead and cruised from there.

Battle of The Border Clash
Monday’s game is another clash in the Battle of the Border, the annual bragging rights between the Racers and Govs encompassing all sports during the school year. The traveling trophy currently resides at Murray State after winning the competition in the first three years of the series. There are many games to be played in the BOB series, after all fall sports were pushed to the spring 2021.

Froggy 103.7 FM – Flagship Station For Racer Basketball
In his 30th season, the “Voice of the Racers” and Murray State Hall of Famer, Neal Bradley is on the call again for the 2020-21 season. Former MSU assistant coach Kenny Roth provides analysis. All MSU games can be heard online at Froggy103.com and GoRacers.com.

Consistent Williams Supplies Post Production
MSU power forward KJ Williams was named All-OVC as a sophomore and has followed that with great production through the first six games in 2020-21. The junior from Cleveland, Miss., is scoring 14.5 points per game and hauling in 7.2 rebounds. Williams is third in the OVC in field goal percentage on 39-of-58 from the field. Williams has scored in double-figures in five of six games this season.

MSU’s Demond Robinson is tops in the OVC in hitting 24-of-27 for 89 percent and is not yet qualified to be ranked nationally by the NCAA.

Racers Need A Road Win
The Racers have hit a two-game skid in away games with losses at Middle Tennessee (Dec. 2) 78-61 and Southern Illinois (Dec. 11) 70-66. In these two road games, MSU is shooting only 41 percent (49-of-119), including 28 percent (11-of-39) from the 3-point line. The game in Clarksville begins a stretch of seven games for the Racers with six of them away from the friendly confines of the CFSB Center. MSU plays at Belmont (Dec. 30) before hosting Morehead State (Jan, 2). MSU faces another four in a row on the road with trips to see SIUE/Eastern Illinois and SEMO/UT Martin.

Check GoRacers.com for the latest basketball schedule information
Men’s Schedule
Women’s Schedule
About MSU Athletics Mobile Ticketing
Beginning with the 2020-21 basketball season, all Murray State Athletics tickets will be distributed via mobile delivery and no physical ticket sheets will be printed in accordance to guidelines from the Commonwealth of Kentucky. Season ticket holders can use the http://am.ticketmaster.com/murray site to access and manage their tickets. Going mobile is the most convenient and flexible way to receive and manage tickets while increasing protection against fraud. Mobile tickets reduce the risk of lost, stolen, counterfeit or forgotten tickets and quick and contactless entry into the venue.
FAQ About Mobile Ticketing

Through the Racer Restart initiative and planning process, Murray State University will follow a collaborative, thoughtful and proactive approach in re-opening campus. This process includes athletics and our goal to offer you the same Racer brand you have enjoyed over the years in a way that is safe for everyone – the student-athletes, the coaches, the staff and the best fans in the OVC, Racer Nation.

FAQ About Racer Restart For Basketball