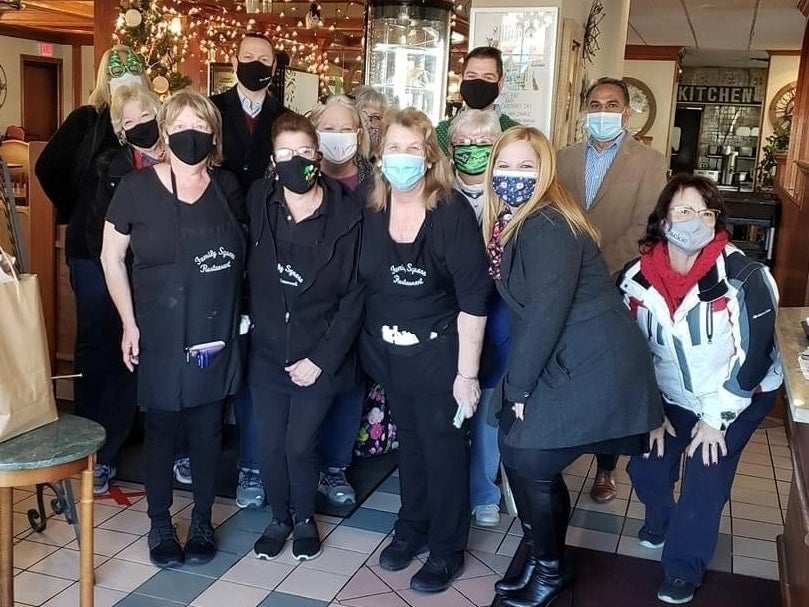 BOLINGBROOK, IL — Christmas came a few days early this year for one Bolingbrook eatery when it received a large tip from a group of residents.

On Dec. 22, Family Square Restaurant welcomed almost a dozen residents as part of local attorney Joe Giamanco’s annual initiative, where the group normally gathers in person to have breakfast just before Christmas at a local restaurant and at the end of the meal, in addition to paying for their food, each person leaves a $100 tip.

The pandemic may have forced businesses to close indoor dining, it could not deter this altruistic bunch from ordering carryout and helping the staff. In the end, the restaurant had received almost $1,800 in tips from them.

Giamanco said he takes suggestions from participants every year on which restaurant to choose. Normally he also contacts the restaurant in advance to talk with the manager and ask to be assigned a server who could use a bit of extra help that year. Most of the tips go to the server, but in past years, a portion has also gone to the other servers, cooks and staff. This year with COVID-19 and no seating available, the group asked that the restaurant split the tips among all its workers.

“Family Square was nominated by a number of people, one such person indicated that the staff there is always kind, attentive and very personable. They are locally owned and have been for decades,” he said. “The staff was a bit stunned. I called and spoke with the manager the day before to let her know what we were doing, mainly so they were not caught off guard, but I asked her to keep it confidential. We explained what we were doing, that we knew this year had been especially tough for those in the restaurant industry and that while it wouldn’t make up for what they had gone through, we hoped it would make things a little brighter at Christmas. The staff was very appreciative and even a couple of quick hugs (with masks on) were exchanged.”

Giamanco has been organizing this event since 2018, and he said he felt very “fortunate to be able to take part given all that 2020 has thrown at our neighbors.” While the pandemic has affected people in different ways, the food industry has been hit very hard, with restaurants closing down or laying off employees.

“We know these tips won’t make up for all that has been lost, but putting a smile on a stranger’s face in these challenging times and asking for nothing in return, to me that’s the type of giving that is the heart of true Christmas spirit,” he said. “Whether this inspires someone to copy the event or put their own spin on it, we just hope it encourages others to do what they can, where they can.”