It’s probably not a stretch to say that right now there are lots of kids in Arkansas wishing they could jump ahead in time to Friday morning and start tearing into the presents Santa has left for them and pouring goodies out of overstuffed stockings.

But instead of traveling forward in time, let’s take a trip back to see what the Christian celebration of Christmas was like in the early days of Arkansas.

Christmas didn’t become a federal holiday until 1870, but Arkansas had recognized Dec. 25 since 1838, just two years after gaining statehood, and was one of the first states to do so (it wasn’t until 1890 that all states made the date a holiday).

The first Christmas celebration in Arkansas may have been a ceremony in 1698 at Arkansas Post by Jesuit priests traveling down the Mississippi River, according to “Celebrating Christmas in Arkansas,” a richly detailed article by historian Martha

Williamson Rimmer in the Pulaski County Historical Review, Vol. 52, No. 4, Winter 2004. The essay was based on a talk she gave in 2003 at the Central Arkansas Library System’s Butler Center for Arkansas Studies.

The priests had stopped for the evening at Arkansas Post. It was Christmas Eve, so they “built an enclosure of evergreens and held a religious service.”

There is not much to report in the way of Christmas celebrations over the next 120 years, Rimmer writes.

In the 1830s, a traveler passing through Arkansas Territory noted that Christmas wasn’t much noticed by most people, “with the exception of the Episcopalians who still adhere[d] to the festivals of the mother country.”

After statehood was achieved and “with the civilized touches brought by churches and women,” Rimmer writes, Christmas traditions from Europe became more prominent.

Gallery: Christmas Past in Arkansas

Some settlers in the Ozarks celebrated “Old Christmas” on Jan. 5, Rimmer says, which was its date in the Julian calendar, before being replaced in British territories by the Gregorian calendar in the mid-18th century.

In a blog at historicarkansas.org, the website of Historic Arkansas Museum, there are accounts of a few traditions from the state’s Christmas past, including this from The Arkansas Pioneer, Vol. 3. No. 1, 1916, in which Frances Woodruff Martin, daughter of Arkansas Gazette founder William Woodruff, recalled a tradition from the 1800s of how a butcher would drum up Christmas business.

“Each year Little Rock butcher [Louis] George’s Christmas bulls were ‘dressed up fit to kill’ — a garland of flowers and evergreens around their necks, and rosettes and streamers of gaily colored ribbons on their ears and tails, a big orange stuck on the tip of the beef’s horns, and pantalettes of white muslin, fastened to their knees with gay bows of ribbon.’ As Mr. George paraded his bulls down the street, Little Rock’s young boys went running after them, shouting and blowing their horns.”

“There was a lot of drinking going on, a lot of fireworks and a lot of gunfire. It was definitely celebrated differently than how we do it today.”

In her article, Rimmer also notes the proliferation of guns and fireworks.

“The practice had its drawbacks,” she drolly observes. A Christmas morning fire in Gurdon in 1885 that started from sparks of fireworks destroyed one store and damaged others. In 1912 in Pine Bluff, groups of streetcar conductors waged a Roman candle battle outside a Main Street tavern. “Coats were spotted where the fiery balls stuck and the battlers were forced to duck and dodge to prevent facial disfiguration.”

Linson recalls a story told by Robert Brownlee, who arrived at Napoleon, south of Little Rock, on Dec. 24, 1837.

“He talks about people coming out of the woods and into town who were ‘fighting and swearing and using the Bowie knife freely … there was one man killed but no one took notice of the fact.'”

One thing that has been around much longer than one might suppose is the commercialization of the holiday. Linson says ads from merchants for Christmas gifts date to the 1840s.

In 1865 one store even claimed to be taking over Santa’s job.

“There is a newspaper ad from 1865 by a Little Rock store that said Santa had gone out of business and if you wanted presents, all of his toys were at this store and you could come there and buy them,” Linson says. 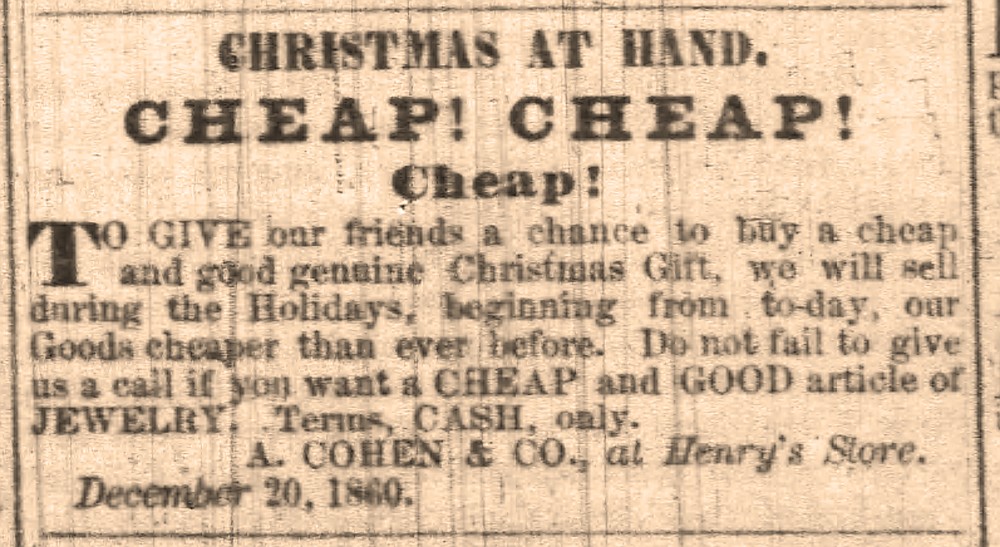 Henryճ Store had Cheap! Cheap! Cheap! jewelry for sale in December 1860, but this ad appeared in the May 18, 1861, Arkansas Gazette.
(Arkansas Democrat-Gazette)

Rimmer, writing about remembrances of 1880s Christmas Eve celebrations in Holly Grove by sisters Bessie and Addie Branch, says stockings were often filled with goodies like “oranges, apples, bananas, sometimes a coconut, raisins, dried figs, almonds, pecans and all kinds of nuts that were not common the rest of the year; packages of firecrackers; sticks of candy; small toys — perhaps a toy pistol or a corncob doll.”

Santa would even leave an ear of corn for the sisters to feed to the chickens.

There was a tradition that single men and boys would not have to work while the Yule log burned, so logs of green wood were soaked in water so that they would burn for as long as possible.

For the enslaved in Arkansas, Christmas meant a few days off from work.

“Between Christmas and New Year’s there would be a break in work for someone who was enslaved,” Linson says. “In a lot of places, as long as the Yule log was burning, they would be off.”

The week between Christmas and New Year’s was also a time when some enslaved people throughout the South were allowed to visit family on other farms.

“They would be expected to return, but often that time was used to escape,” Linson says.

Christmas trees and their trimmings were a German tradition. The practice of keeping a tree in the house didn’t really come about until the 20th century, Rimmer says. Earlier celebrants would often gather around a tree at church or in the town square.

The Historic Arkansas Museum blog contains a quote from Therese Westermeier, who wrote in the Spring 1956 edition of Arkansas Historical Quarterly:

“I found an interesting news item about the first Christmas tree in Fayetteville, introduced by a German in 1839 who decorated it with carved wooden toys of his own making ‘and charged ten cents admission for those who came to look upon this new feature in Christmas celebration.'”

Linson mentions a diary kept by Virginia Davis Gray during the Civil War that refers to decking out the Christmas tree at Princeton, in Dallas County.

The entry from Saturday, Dec. 5, 1863, reads: “We are making fixings for Christmas tree that will be decorated with articles made from bits of strings, rags and candies made from brown sugar and we will be amused and satisfied with it all.”

Rimmer writes about a Franklin County man who remembered “how tasty mincemeat was with chunks of dried peaches and apples and plump raisins conglomerated in with the lean tender pork.”

“There was an 1840 advertisement for a store on Markham Street [in Little Rock] for Christmas cakes,” Linson says. “Eggnog was also popular.”

Travel during the holidays didn’t become widespread until the 20th century, when moving about the country became more efficient.

Christmas cards had been around since the 1870s, but it wasn’t until the early 1900s that sending Christmas greetings on cards became popular.

Arkansas Gov. Sid McMath, who served from 1949-1953, started the tradition of the state’s governors sending out Christmas cards.

The Old State House Museum has a collection of cards sent by governors.

“The message was usually just wishing people well for the upcoming year,” says Jo Ellen Maack, curator at the Old State House. “They usually didn’t take a political tone. Some were elaborate, some were very simple.”

First lady Alta Faubus, wife of Gov. Orval Faubus, held a Christmas party each year at the Governor’s Mansion for children in the neighborhood.

“One year a friend brought in reindeer from Texas,” Maack says. “Santa had had candies for all of the kids in the neighborhood and traffic was backed up because there was a sleigh with reindeer at the Governor’s Mansion.” 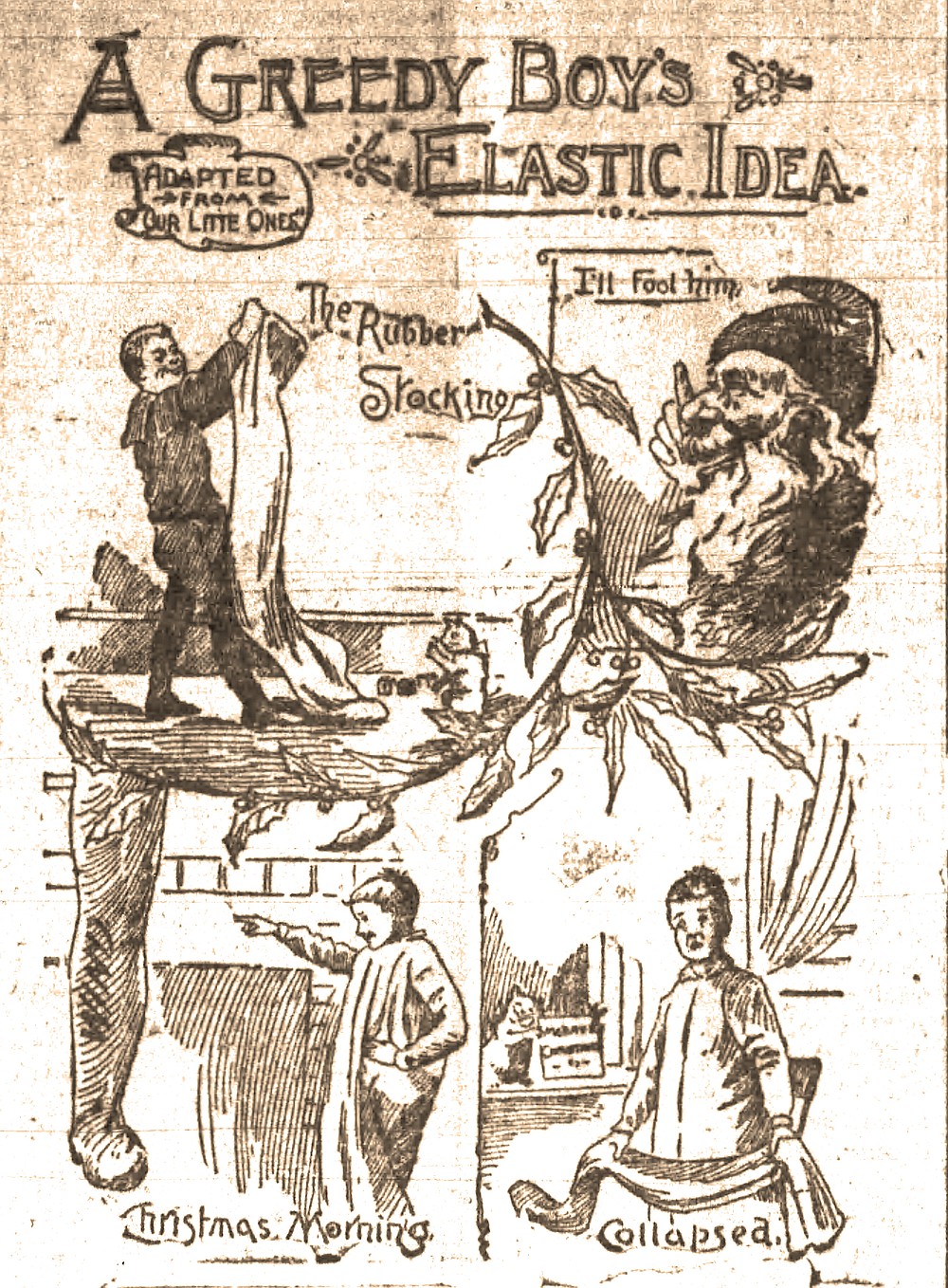 A greedy boy’s plan to snooker Santa falls flat in this illustration from the Dec. 24, 1893, Arkansas Gazette.
(Arkansas Democrat-Gazette)