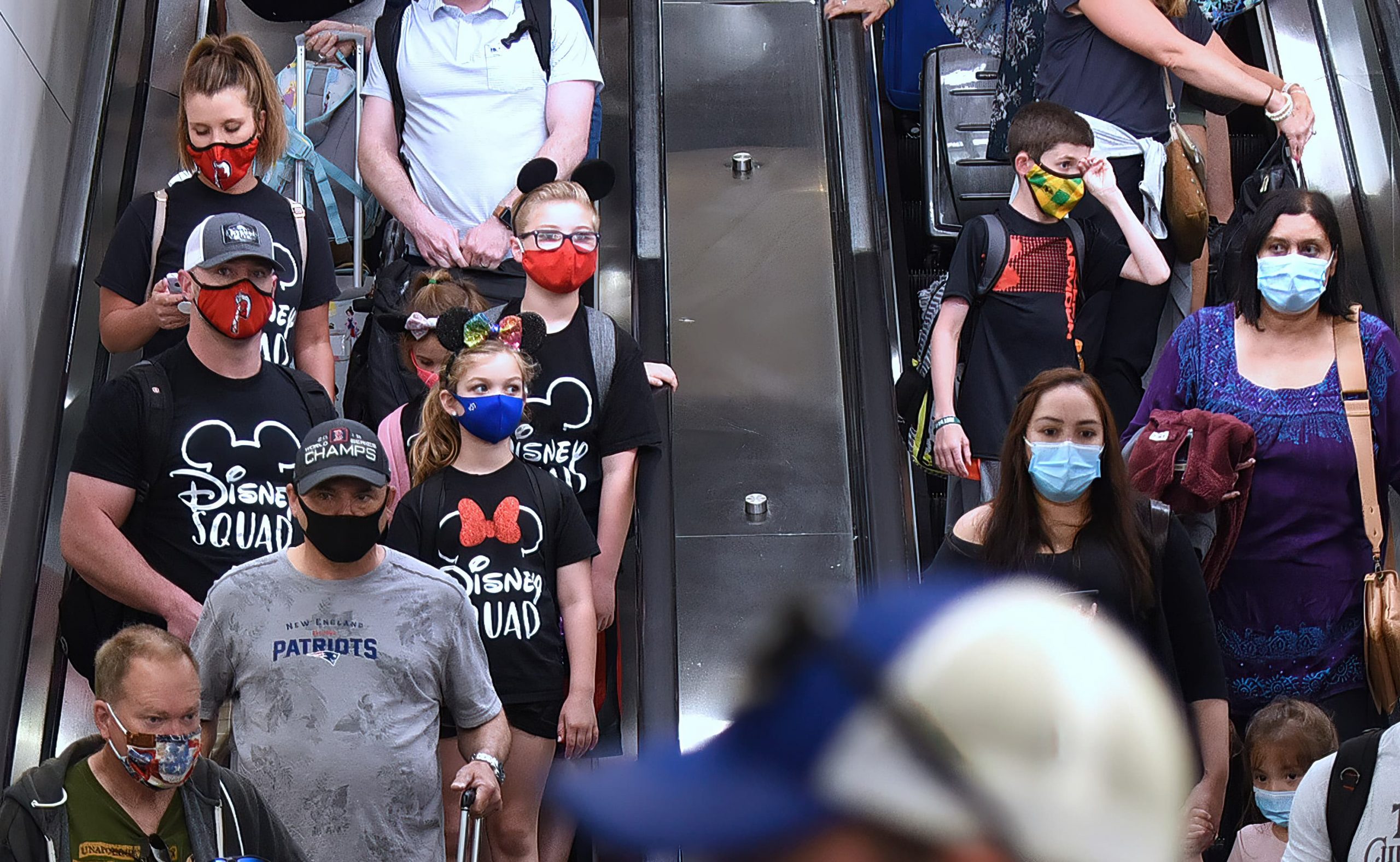 Passengers wearing face masks as a preventive measure against the spread of Covid-19 are seen on an escalator at Orlando International Airport.

The number of people traveling again is on the rise. So are prices.

Airfares and hotel rates are climbing as travelers return in the highest numbers since the pandemic began, hitting beaches, mountains and visiting friends and family after a year of being cooped up.

Even the cost of a road trip is climbing as gasoline prices reach the highest levels since 2014.

The rock-bottom fares hit during the depths of the pandemic were largely in the rearview mirror earlier this spring. Now airlines and hotels are gearing up for a bustling summer, and a rise in bookings is driving up prices even more. Add to that airlines are not flying as much as they did pre-pandemic, so travelers can expect some full flights ahead.

Domestic U.S. fares are up 9% since April 1 while international fares are up 17%, according to research from Bernstein published this week. And fares are continuing to rise.

“For domestic travel, the June line is closest as it has ever been this past year to the prepandemic values,” the report said.

Many travelers, like Diana Desierto, are eager to visit friends and family they haven’t seen in months.

The 40-year-old, speech pathologist who lives in Baltimore, hasn’t seen her parents, sister, brother-in-law and nephews in Oakland, Calif., or her brother, sister-in-law and a niece and a nephew in Seattle since Christmas 2019.

“I have a 12-year-old nephew who had a crazy growth spurt,” she said. “Last time I saw him he was little. And [now] his voice is low.”

Desierto paid $344 for a one-way trip to Seattle and a connecting flight to Oakland in July. She used Southwest frequent flyer miles for the trip home. She said the west-bound fare was roughly in line with prices she had been used to for years though she briefly thought that “maybe no one’s flying and it would be cheaper.”

Further helping boost fares is that airlines are reinstating the strict rules on their more inflexible and cheapest fares, known as basic economy, according to Samuel Engel, head of the aviation practice at consulting firm ICF. Airlines executives have said they hope travelers avoid such fares and buy standard coach tickets, which are more expensive.

Airlines lifted the rules in the pandemic to get desperately needed travelers on board as carriers faced record losses.

“Relaxing the rules in basic economy, I’m basically giving you a $30-$50 discount,” Engel said. “The intention of basic is not to sell basic economy; it’s to bring you in the door and make you realize you don’t want it.”

Another thing driving up the cost of a trip is that more attractions like theme parks are reopening. Covid-era capacity restrictions and even masking guidelines (except during air, rail and bus travel), are lifting as well.

Destinations that for about a year had less to offer visitors than normal. Airline executives say beach, mountain and other outdoor destinations have been popular with travelers and continue to be important.

The price of a hotel in some popular destinations are even higher than before the pandemic.

But with more reopening, other cities are recovering. Orlando hotel rates in early May were $107 a night, up from $62 last year but still below the $133 in 2019.

Even New York City, which is planning to reopen Broadway theaters in September and is now offering indoor dining, is recovering. Rooms, which were going for $123 a night last year, rose to $151 in early May — still well below the nightly rate of $269 in 2019. STR expects New York City room rates to rise to an average of $163 a night for June through August.

Fares and hotel rates are still largely below 2019 levels because business and most international travel is largely absent. That will keep a lid on prices going forward.

Some travelers have other concerns beside price: crowds.

Tom Snitzer, 64, a retired real estate developer and currently a professional nature photographer based in the Chicago suburb of Arlington Heights, said he recently flew to Atlanta for his son’s graduation from medical school.

He said it took 40 minutes to get through airport security. The Transportation Security Administration is racing to hire more screeners before the busy summer travel season.

Snitzer said his travel plans are flexible but that he plans to avoid big tourist attractions, including popular national parks.

“Everyone in the world has been cooped up,” he said. “The biggest trick is to avoid everybody else, find off-the-grid spots so we don’t get trampled by tourists.”