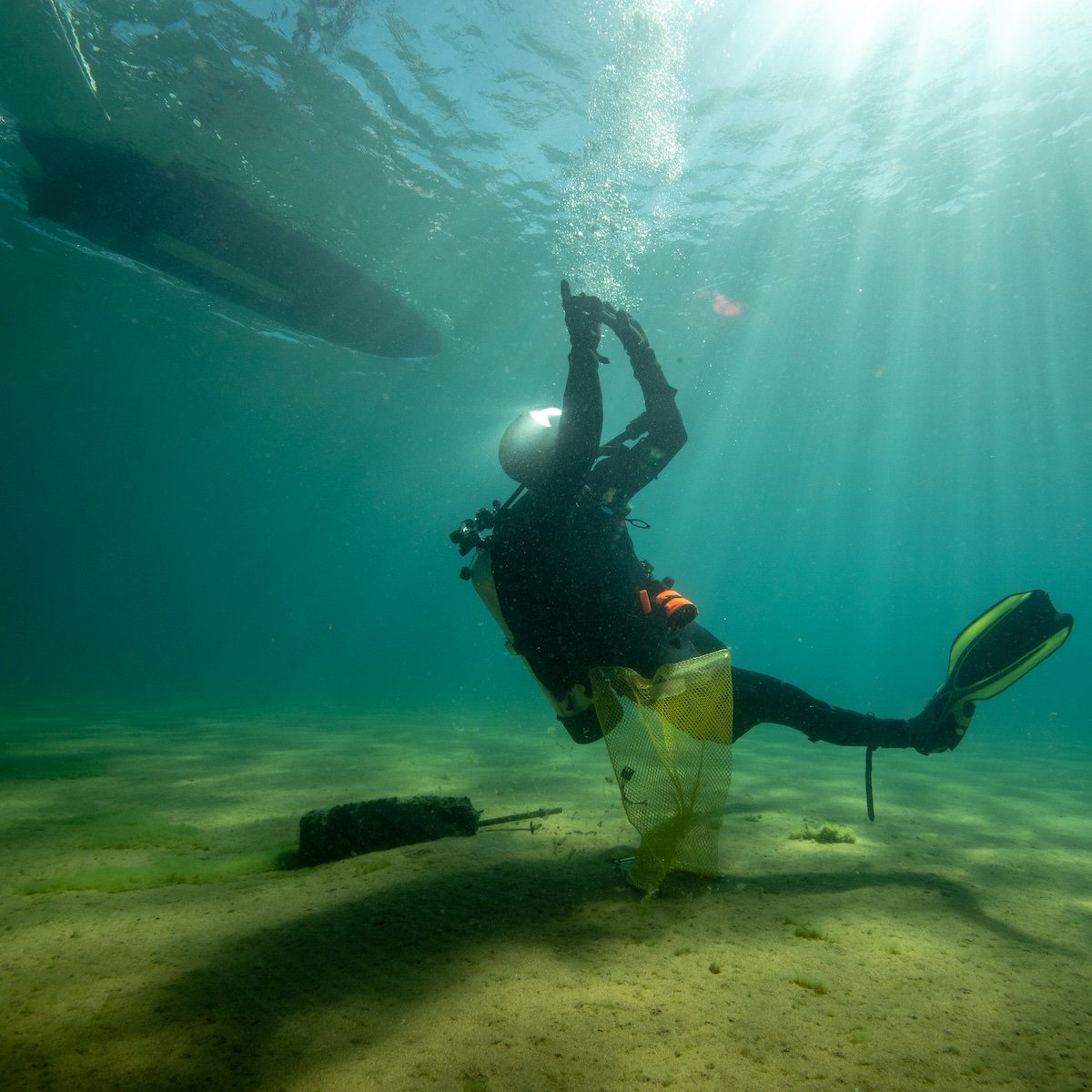 Drive around Northern California or Nevada and you’ll find plenty of Keep Tahoe Blue bumper stickers on the backs of cars. One organization is doing its best to make that a reality.

Clean Up The Lake, a group of divers and other concerned residents, has started a six-month project to clear as much trash as possible from the bottom of the lake that straddles the California-Nevada border. It’s the second-deepest lake in the United States and features some of the bluest waters in the world. Clean Up The Lake wants to keep it that way.

“We are still learning not to be so wasteful, but unfortunately, as a species, we still are, and there are a lot of things down there,” Clean Up The Lake founder Colin West told the Associated Press.

West and a few others completed their first dive in the lake last week in Edgewood along the south shore. They collected more than 200 pounds of garbage during their one-tank session.

Divers also found about 20 items too heavy to remove, including car bumpers and buckets filled with cement. His team will return at a later date with a boat and crane to get the bulk.

West and his volunteers are aiming to dive three days a week, cleaning a one-mile stretch of the shoreline during each outing. That gives them about six months to complete all 72 miles.

“The fight isn’t just going to end after the 72-mile cleanup,” West told KTVN. “This cleanup will make a big difference, but most of all we’re hoping to get a really good snapshot of what is going on under the lake this year so we can continue to make a difference moving forward.”

This has become a passion project for West, who lives on the lake’s south shore in Stateline, Nevada. He started doing beach cleanups in 2018 after a visit to Belize, where he was alarmed by the amount of trash on the beaches there.

Survey dives done in 2019 and 2020 showed West just how severe the problem is in Lake Tahoe.

West and his volunteers are using mesh bags to collect small items while underwater, while larger items like tires are hoisted to the surface from boats, kayaks, and other vessels above.

Once brought to shore, every item is being categorized to help the group with public messaging and lobbying efforts.

“We’re classifying it into 77 different categories, so from wood to rubber to construction materials to fishing equipment to clothing to sanitary products to whatever, so that we can better understand what’s happening,” West told KNTV.

Taking on such a project is not cheap, but the community has stepped forward with donations, including Tahoe Blue Vodka, which chipped in $100,000 toward the effort. The nonprofit Tahoe Fund stepped in to collect donations, growing the pot to more than $250,000.

West is also getting lots of calls from people wanting to volunteer, with more than 300 certified scuba divers having applied to participate.

The groundswell of support is overwhelming, he said, but the goal remains the same: “I just want to do something to make a difference.”

If you’re a diver (or want to get certified!), check out all our diving inspiration here. And, if you’re vacationing in Northern California or Nevada, don’t miss all our Lake Tahoe recommendations.