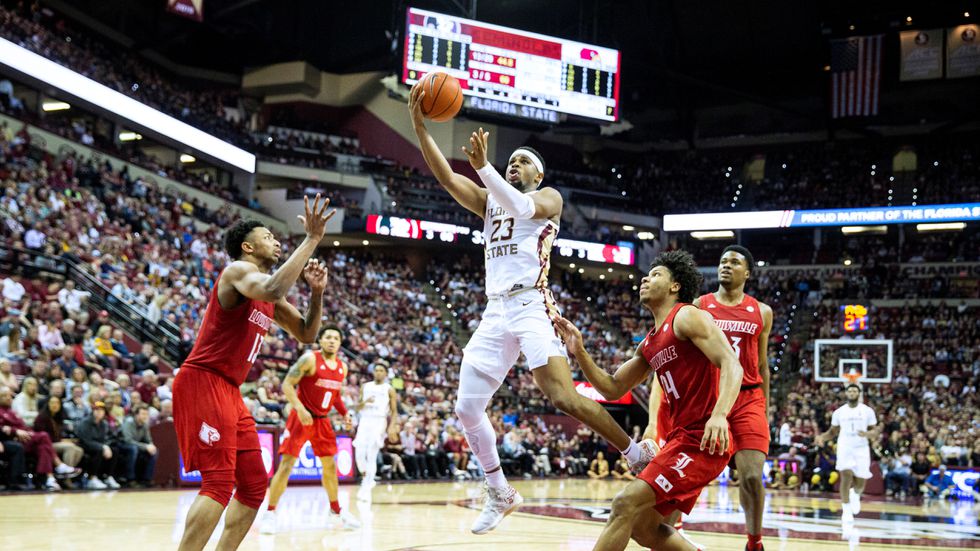 TALLAHASSEE, Fla. (WCTV) – The Florida State Seminoles are in search of their third-straight win as they head to the Bluegrass State to take on the Louisville Cardinals.

After returning to the floor from a COVID-19-induced hiatus, the Noles have rattled off two straight wins, a 105-73 shellacking of North Carolina State and an 85-75 win over UNC on Saturday.

The Cardinals enter tonight nearly equally as hot, having won five of their last seven, but are coming off a 78-72 loss at Miami.

Follow along below for live updates throughout the game. Tipoff is set for 7 p.m. and the game can be seen on ESPN.

2nd Half 7:40 – Louisville at one point had the Seminole lead cut to single digits but the Tribe has come alive once again to lead 67-50. The Cardinals have gone almost four minutes without a bucket and FSU has made four of its last five. Balsa Koprivica has scored two of the ‘Noles last five and Malik Osborne just put a man on a poster.

2nd Half 15:11 – A fun, back and forth beginning to the second half as we hit the under 16 timeout. Florida State still up 49-38. RaiQuan Gray has powered the Seminole offense in the early goings of the period with five points.

Halftime – Louisville ends the first period on a 12-2 run but Florida State still heads into the locker room with a hefty, 42-28 advantage.

1st Half 6:40 – The barrage continues as the ‘Noles have now opened up a 32-13 lead on the ‘Cards. Seven Seminoles have recorded something in the scorebook with Evans, Wilkes and Barnes all leading the way with six apiece.

1st Half 15:49 – Strong first sequence for FSU as we hit the first media TO. ‘Noles lead it 11-4 with four ‘Noles already recording a bucket. Scottie Barnes has officially entered the game for the ‘Noles.

Pregame – Hey everybody, Ryan here. We’re just about 10 minutes away from tip. Starting lineups have been posted and are without Scottie Barnes for the third straight game (unclear if he’ll play) while Anthony Polite will be unavailable tonight due to a shoulder injury.